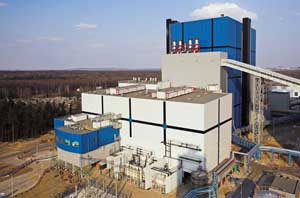 Foster Wheeler provided turnkey supply of the boiler island, including engineering and design, erection, civil work, start-up, and commissioning. Many existing plant systems, including those for coal handling and water treatment, were renovated for use with the new 460-MW CFB unit.

The unit incorporates a number of advanced design features, such as compact solid separators, INTREX superheaters, and low-temperature flue gas heat recovery that captures valuable heat that would otherwise be lost. It also employs — for the first time ever in a CFB — Benson vertical-tube supercritical steam technology.

"Specifically, in relation to the older, de-commissioned boilers, the new CFB burns less fuel and produces significantly lower levels of carbon dioxide and other emissions for each megawatt generated," said Pertti Kinnunen, executive vice president of engineering and technology for the Finnish subsidiary of Foster Wheeler’s Global Power Group. Kinnunen is said to have been responsible for conceptual design of the boiler in 2003.

CFB technology is a cleaner-coal platform with a unique low-temperature combustion process that efficiently burns both traditional fuels and carbon-neutral fuels. Unlike conventional steam generators that burn the fuel in a large, high-temperature flame, CFB technology does not have burners or a flame within its furnace. Instead, it uses fluidization technology to mix and circulate fuel particles with limestone as they burn in a lower-temperature combustion process. The limestone captures the sulfur oxides as they are formed, while the lower burning temperature minimizes the formation of thermal-nitrogen oxides. The fuel and limestone particles are recycled over and over back to the process, which results in high efficiency for burning the fuel by extending the combustion residence time, capturing pollutants, and transferring the fuel’s heat energy into high-quality steam to produce power.

Successful operation of the first large-scale supercritical CFB marks a milestone in the technology’s history. The first commercial CFB was built by Foster Wheeler in 1979. The 5-MW boiler supplied to Suomen Kuitulevy in Pihlava, Finland, burned wood residues and peat. It was soon followed by a 20-MW plant in Kauttua, Finland. Over the years, CFB technology matured and its use expanded. In 2002, the first-generation technology reached peak size, with two nominal 300-MW boilers being installed at Jacksonville Energy Authority’s Northside Generating Station in Florida, POWER’s 2002 Plant of the Year.

The fluidized combustion technology options continue to evolve. According to the U.S. Department of Energy, a major efficiency-enhancing measure for second-generation pressurized fluidized bed combustors is the integration of a coal gasifier (carbonizer) to produce a fuel gas. This fuel gas is combusted in a topping combustor and adds to the combustor’s flue gas energy entering the gas turbine, which is the more efficient portion of the combined cycle. The topping combustor must exhibit flame stability in combusting low-Btu gas and have low-NOx emission characteristics. To take maximum advantage of the increasingly efficient commercial gas turbines, the high-energy gas leaving the topping combustor must be nearly free of particulate matter and alkali/sulfur content. Also, releases to the environment from the pressurized fluid bed combustion system must be essentially free of mercury, an air pollutant for which federal regulations are in limbo. CFB research and development also focus on reductions of both cost and carbon dioxide emissions, so new sorbents are being evaluated. Sorbent utilization has a major influence on operating costs, and carbon dioxide emissions streams can be used in the production of alkali-based sorbents.

Efforts are ongoing at the Power Systems Development Facility (PSDF) in Wilsonville, Ala., to ensure that critical components and subsystems are ready for the demonstration of second-generation pressurized fluidized bed combustion. The PSDF is operated by Southern Company Services under a Department of Energy contract to conduct cooperative research and development with the industry.