Hydraulic fracturing — the process of drilling and then pumping fluid deep into a formation to generate fractures or cracks, typically for extracting natural gas from shale formations — has been under fire lately, owing to concerns that it contaminates drinking water. But while Congress debates proposed legislation that would impose new restrictions on the technology, an entirely different concern related to fracturing — or "fracking" — is emerging: It may trigger earthquakes.

The claim is not new, but attention to it has been renewed following a June 2 earthquake recorded at Cleburne, Texas — the first in the town’s 140-year history — and four subsequent smaller quakes, none with a magnitude greater than 2.8. Speculators assert that what’s causing the temblors is fracking, which began in earnest in 2001 in the Barnett Shale, a geologic formation said to be the nation’s richest gas field. A geologist has yet to confirm the claim.

At the same time, fracking-related quake concerns are mounting in northern California, around The Geysers region, where start-up company AltaRock Energy is looking to tap geothermal energy in a demonstration of Engineered Geothermal Systems technology. The technology essentially pumps water into the earth, creating fractures in the hot dry rock (Figure 3). The water then flows into the fissures, creating a reservoir of very hot geothermal fluid that is continuously heated, and when it is returned to the surface, the pressure decrease produces steam, which is used to turn a turbine. That project has secured more than $36 million from the DOE and has the backing of several large venture capital firms. 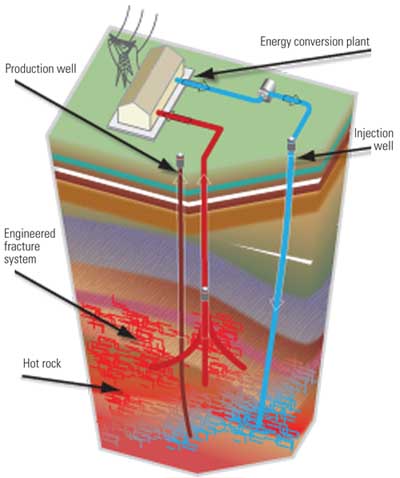 3.     Cracks that run deep. Hydraulic fracturing—a process that involves drilling and then pumping fluid deep into a formation to generate fractures or cracks—has been thought to cause earthquakes, most recently in Cleburne, Texas, where fracturing, or “fracking,” is used to extract natural gas from shale. But Alta Rock’s geothermal demonstration plant, which uses Engineered Geothermal Systems technology (shown here) has also come under scrutiny because the project proposes fracturing hard rock more than 2 miles deep in an area overlying two fault lines. Courtesy: Department of Energy

But it has caught bad press from The New York Times, which points out that the project proposes fracturing hard rock more than 2 miles deep in an area overlying two fault lines. The newspaper draws similarities between the Alta Rock demonstration and a Swiss geothermal prospecting project in Basel, which is believed to have triggered a massive earthquake on Dec. 8, 2006, after prospectors drilled 3 miles into a significant fault.

Alta Rock has disputed the comparison, saying that Basel sits on top of a large (200-km long) "locked" fault that previously ruptured and heavily damaged the city in the 14th century. "We carefully chose our site to avoid Basel’s problems," the company said in a statement. "There has been geothermal energy production at the Geysers since 1965. AltaRock’s project is located in a seismically active area adjacent to smaller faults (the closest faults are 3 and 11 km long) which are not ‘locked’ due the constant stress relief resulting from small seismic movements."

Can Fracking Cause Earthquakes?

There is no consensus among geologists on whether drilling causes earthquakes. But, according to Dr. David Oppenheimer, a seismologist with the U.S. Geological Survey (USGS), the fracking process could certainly generate seismic activity "because that is how the fractures are made," he told POWER in July. Concerning the Alta Rock project, he said, "After the fractures have been established at the Geysers and an enhanced geothermal system has been implemented where cold water introduced in the injector flows through the fractures to the second well to return to the surface, it is possible that seismicity could be induced due to thermal contraction of the reservoir rock."

There are also certain conditions that could trigger a large earthquake, and foremost among them is "sufficient, pre-existing tectonic stress," conditions that exist at The Geysers because the geothermal field is located near the Pacific-North American plate boundary, he said. "However, even in areas like Colorado, far from a plate boundary, a magnitude 5.3 quake was induced by pumping of waste fluids into a deep disposal well at the Rocky Mountain Arsenal." With regard to fracking and earthquakes associated with natural gas extraction, Oppenheimer said that the pressures introduced by the process would have to exceed a "minimum compressive tectonic stress" to encourage an earthquake. "If the hydrofracture pressures are lower, then no fractures should occur," he said.

The fracking-quake debate raises questions about whether geological carbon sequestration — storing carbon dioxide by injecting it deep within geologic formations — could prompt quakes. Dr. Christian Klose, a geophysical hazards research scientist from Columbia University, says it could — as much as any geological fluid injection can. He told POWER in July that three processes could trigger seismic activity, large and small: pore fluid pressure changes; fluid mass (volume) changes, which can cause stress on the rock; and migration of the CO2 through the rock over decades to centuries. "CO2 is buoyant since its density is [lower] than saline water deep in the crust," he said. "Thus it will come upward through cracks and fractures and faults — even in so-called cap rocks are rock discontinuities that cause leakages."

Klose said that the quake risk is intensified by hydrofracturing, a process that is recommended by the DOE’s Midwest Regional Carbon Sequestration Partnership to provide a better injection rate into rocks that have moderate porosity and low effective permeability. The recommendation comes as one of several "lessons learned" from a sequestration field test at FirstEnergy’s R.E. Burger Plant near Shadyside, Ohio, in the Appalachian Basin.

But, according to Traci Rodosta, a geological sequestration project manager for the National Energy Technology Laboratory, quake risk is well-assessed during research and development of any given project. "Potential sequestration reservoirs are thoroughly characterized prior injection," she told POWER. "In order to eliminate and reduce the potential for fault activation and slippage along preexisting fractures that could be caused when injecting fluids at high pressures, regulatory agencies limit injection rates and pressure to avoid unintentional hydrofracturing. CO2 storage projects would operate under similar guidelines, and the risk managed through site characterization, injection design, and monitoring."