Concerns raised by the U.S. Nuclear Regulatory Commission (NRC) about the structural strength of Westinghouse Electric Co.’s AP1000 reactor could cause delays for several nuclear plants that planned to use the design in the U.S. — and it raises questions for new builds started or proposed in China and the UK.

The federal agency on Oct. 16 told the Toshiba Corp. that it had not "demonstrated… certain structural components of the revised AP1000 shield building [could] withstand design basis loads." The shield building protects the reactor’s primary containment from severe weather and other events, but it also provides a radiation barrier during normal operation and supports an emergency cooling water tank. Though the NRC would continue reviewing the remainder of the next-generation reactor’s design certification amendment application, it told Westinghouse in a letter that it expected the company to make design modifications and conduct testing to ensure the shield building design could sustain its safety functions.

Notably, the agency told Westinghouse that the impact on the overall AP1000 certification review — whose completion was expected by December 2010 — would be established after agency staff and the company had discussed the NRC’s concerns.

The AP1000 (see schematic, p. 95 in our Nov. 2009 issue) has already received design certification, but Westinghouse in May 2007 formally submitted an application to revise the design to "aid in reducing the cost, schedule, and risk" for U.S utilities that plan to submit combined construction and operating license (COL) applications. Additionally, the company had anticipated that the decision would contribute to increased standardization of the reactor design, making the NRC’s review of AP1000 COL applications more efficient.

But the NRC’s decision could have adverse implications for seven U.S. utilities that are seeking to build 14 new AP1000 units and that chose the reactor design over several others under review or that have garnered NRC approval. Among the more prominent projects are two thought to be contenders for $18.5 billion in loan guarantees from the Department of Energy: Southern Co.’s Plant Vogtle in Georgia (see the story on Plant Vogtle in our Nov. 2009 issue) and SCANA Corp.’s V.C. Summer plant in South Carolina.

Just this August, the NRC issued its fourth early site permit for Plant Vogtle’s two planned units — and its first for the Westinghouse AP1000 reactor design. Before full construction and operation of the two planned AP1000 units can begin, as was anticipated in 2011, the NRC must approve Southern Co.’s March 2008 application for a COL, however. Delays in the reactor design’s review put timelines for the $14.4 billion project in limbo.

The NRC’s decision could also throw a shadow over modular construction techniques, which reactor vendors had said would control costs and timelines. Utilities like Georgia Power, Southern Co.’s parent company, had used this justification at state legislatures to collect in advance some of the cost to expand the nuclear facility at Plant Vogtle. Following the NRC’s conclusions about the AP1000 reactor design, environmental groups sought to block construction of the two units, asking a federal judge to review the NRC’s early site permit. The groups argued that as delays occur, costs — which ratepayers will be forced to pick up — are likely to rise.

Westinghouse and Southern Nuclear officials issued statements following the NRC’s public letter saying that they were confident that the issue would be resolved satisfactorily in time to avoid costly delays.

Meanwhile, the NRC’s finding seems to have no bearing on construction plans in China. Westinghouse and consortium partner Shaw Group are under contract to provide China’s State Nuclear Power Technology Corp. (SNPTC) with four AP1000 reactors. Construction of the world’s first nuclear power plant to use the reactor design began this April at Sanmen in Zhejiang province. At the end of September, crews began pouring basemat structural concrete for the two-unit nuclear island in Haiyang, Shandong province (Figure 1). 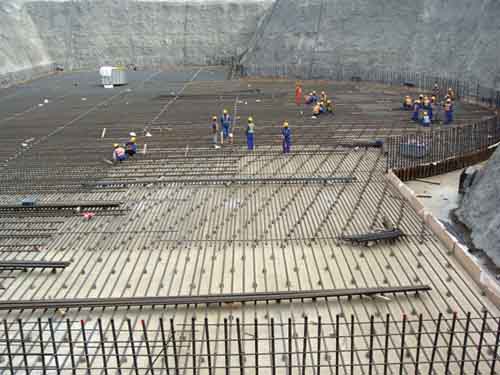 1.     In on the ground floor. Nuclear Regulatory Commission concerns about the AP1000 may have no bearing in China, where Westinghouse and consortium partner Shaw Group have signed a contract for four AP1000s. Two units at Sanmen, in Zhejiang province, are already under construction. In September, crews laid concrete for the second two-unit nuclear island in Haiyang, Shandong province. Courtesy: Westinghouse Electric

It is too early to tell if or how the NRC’s decision will make waves across the pond, in the UK, where the AP1000 and AREVA’s EPR are undergoing a generic design assessment process. An Oct. 26 report from the UK Health and Safety Executive concluded that the approval process is on schedule for completion in June 2011, though neither of the designs is truly complete. Regarding technical problems, the EPR has an issue concerning instrumentation and control, which will require design changes. For the AP1000, the government body said it would need more information to show that non-nuclear structures will be built to high-enough standards.