Often, the best way to deliver a piece of bad news is to come right out and say it: 2004 was a bust year for the renewable energy industry. Sure, Congress reinstated the Production Tax Credit (PTC) last October, but not until it had lapsed. The result of the subsidy gap was predictable: an industry in disarray, canceled orders, and job losses. The new PTC provides a 1.8¢/kWh tax credit, annually adjusted for inflation, for electricity produced by several types of generating stations powered by renewable fuels. One thing that environmentalists and their opposites can agree on is that local and federal government policies that either mandate shares in generation mixes or enable tax write-offs are a major driver of renewables’ market success.

The glass is half full

Now that the PTC is back on the books, optimists say 2005 is off to a good start. Though the renewal is welcome news to manufacturers and project developers, its ripple effects are just now being felt. However, pessimists point out that the PTC is again scheduled to expire—at the end of this year—so they advise preparing for uncertainty again.

According to Godfrey S. Chua, a principal analyst at Emerging Energy Research (Cambridge, Mass.), "The [renewable energy] industry has all but written off 2004; the number of new installations dropped by nearly 90% from 2003 levels." However, it’s worth mentioning here that 2003 was a good year for the U.S. wind industry. It overtook Spain as the second largest wind power market in the world—both in terms of new installations and installed capacity.

"One company in particular stands to profit most from the passage of the PTC—GE Wind," says Chua. Because GE Wind has a factory in Tehachapi, Calif., and because the U.S. dollar is currently weak, its turbines can better compete on cost with units built in Europe and priced in euros. "As a result," explains Chua, "it behooves project developers to submit their orders while the PTC remains active." However, this boom is causing a bit of a problem: There are now shortages of parts, human resources, and ancillary support infrastructure in the wind turbine industry. Why? Because orders are going through the roof.

Coincidentally, in the same month that the PTC was renewed, Hydro-Québec announced that it had sent GE Wind a request for a proposal to supply 660 turbines with 990 MW of total capacity for eight projects to go on-line in Quebec from 2006 to 2012. And two weeks later, GE announced it had secured contracts to supply more than 750 MW of wind turbines as well as commitments for another 750 MW for new projects to break ground this year in the U.S.

Does the U.S. renewable energy industry—which currently holds a 6% share of the American generation market (Figure 1)—benefit from riding the PTC roller coaster? "No," says Paul Komor, a lecturer at the University of Colorado at Boulder and author of Renewable Energy Policy, a recently released book. "Policy uncertainty is the Achilles heel of renewables. [To succeed in the long term,] the renewables industry is going to have to move away from on-again, off-again subsidies like the PTC," Komor believes.

1. Steady as she goes. In the U.S., renewables are holding steady at 6% of the nation’s energy supply.
Source: U.S. DOE’s Energy Information Administration

To explain his stance, Komor says that the current trend of employing "market-friendly policies" is inherently contradictory. Although the intent of such policies is freeing users to make their own decisions, the policies also attempt to ensure that renewable technologies get traction until they can mature. What’s needed, he says, is a better matching of policy goals and policy options. If, for example, the policy goal is to get the greatest short-term carbon reduction at the lowest cost, then a simple renewable portfolio standard (RPS) is a better approach.

The UK, for instance, has developed a national Renewables Obligation Policy (ROP), which is much like the RPS in various stages of development in 19 U.S. states. But in contrast to the on-again, off-again PTC policy in the U.S., the ROP requires all licensed electricity suppliers in England and Wales to supply a specific and growing proportion of their sales from a choice of eligible renewable resources. Furthermore, in setting up the ROP, London established parameters that are designed to favor market-based solutions for meeting the UK’s demanding targets, and these parameters are finding favor with business.

The consensus seems to be that the RPS and ROP approaches work well for mature (and consequently less-expensive) technologies such as wind, hydro, and geothermal. But they are of little benefit to emerging technologies (such as wave and tidal power plants) that still need infusions of R&D dollars.

According to Alastair Newton, director of investment at UK Trade & Investment USA, "The future of the UK wind industry is bright—both in terms of its investment and environmental attributes." He explains why Europe in general and the UK in particular are better places to site wind energy projects than the U.S.: European policies that support the renewables industry drive innovation. In the U.S., the boom-bust PTC cycle, by regularly wreaking havoc on the industry, stifles innovation. As a result, renewable technologies are likely to be market-viable in the EU earlier than they will be in the U.S., Newton concludes.

The mandate to adopt renewables comes from the top levels of government. For example, the basis of UK energy policy is the scientific consensus that climate change is a serious threat. Accordingly, the UK is set to mandate cuts in national carbon dioxide emissions by 60% by 2050. As a first step toward that goal, London hopes that the UK can get 10% of its electricity from renewable sources by 2010 and then double that share by 2020. Given that the share in 2003 was just 2.2%, much work obviously has to be done—quickly.

In the end, however, the success of such initiatives will—no surprise—largely be determined by the relative price of renewables. To fans of alternative energy, the recent rises in natural gas and coal prices are a positive development because they make power generated by renewables more cost-competitive with kilowatt-hours generated by conventional technologies. Should fossil fuel prices continue to rise, wind and other renewable energy projects eventually will no longer need explicit policy support in the form of portfolio standards or tax credits.

Blowin’ in the wind 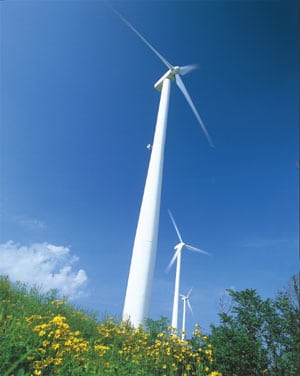 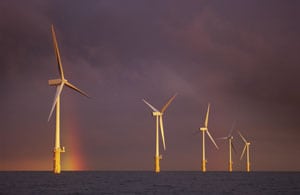 3. Offshore giants. Five of the 30 Vestas V80 wind turbines, each rated at 2 MW, at the North Hoyle wind farm off the North Wales coast of the UK.
Courtesy: NPower

Solar power also made strides in several places in 2004. In fact, the world’s largest photovoltaics (PV) power plant, rated at 5 MW, came on-line last September in Germany. But its status was eclipsed three months later by a 10-MW facility in the same country. The town of Espenhain, about 20 miles south of Leipzig, is home to the $28 million Espenhain Solar Park, which has 33,500 Shell Solar SQ modules.

According to Germany’s environment minister, Juergen Trittin, the Espenhain PV project alone is offsetting 3,700 tons of carbon dioxide emissions annually. Furthermore, he predicts that in 20 years the global PV industry will be over $120 billion. Trittin explains that to make sure Germany gets a piece of that tasty pie, the government will do what it takes to develop the local market. Currently, renewable energy accounts for 10% of Germany’s electrical production, and the government aims to double that share by the year 2020. That total includes a 2004 total of 500 MW of PV power, produced by 20 large-scale projects and 130,000 private systems.

Germany should be able to crow that it has the world’s largest PV plant for a long time. At press time, the 10-MW Bavaria Solarpark (Figure 4) was slated to go on-line in December 2004. PowerLight Corp. (Berkeley, Calif.), K&S Consulting Group (Regensburg, Germany), and Frankfurt-based Deutsche Structured Finance got together to build the park, which uses 57,600 PowerLight PV panels rated at 175 watts and comprises three separate systems: Solarpark Muehlhausen (6.3 MW), Solarpark Guenching (1.9 MW), and Solarpark Minihof (1.9 MW). 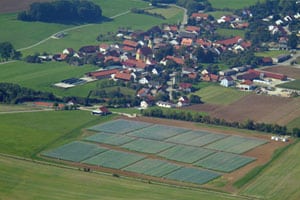 PowerLight has been busy with a number of highly visible PV projects. Early in 2004, the company completed the 1.05-MW PV facility at Cal State Hayward (Figure 5), across San Francisco Bay from Silicon Valley. Located atop four different buildings, the PV array is the largest solar electrical system at any university in the U.S. Covering more than 75,000 square feet, it delivers 30% of the campus’ peak electricity demands and reduces the university’s annual electricity bill by $200,000. 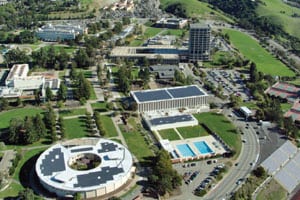 5. Solar for students. The PV array at Cal State Hayward, rated at 1.05 MW, is one of the largest solar power installations in the U.S.
Courtesy: PowerLight Corp.

New hydro projects are in short supply these days—especially in the U.S. Because it can take up to seven years and several million dollars just to negotiate the permitting process, many companies opt out before a project even gets off the ground. As a matter of fact, when asked about new projects in 2004, the U.S. Hydro Association had nothing to say on the subject. Widening our view, we had to go all the way to Norway before we found a hydro project worthy of note.

The $165 million rebuilt Tyin hydropower project—Norway’s largest since the early 1990s—came on-line at the end of 2004. Owned and operated by Oslo-based Hydro Oil and Energy, the project secures a reliable power supply for Hydro’s aluminum operations next door.

Although the "new" Tyin plant doubled the old plant’s size to 374 MW, annual generation will increase only 15% (to 200 GWh) because it will operate as a peaking rather than as a baseload plant. The new plant minimized its environmental footprint by reusing much of the old plant’s infrastructure, including the existing water reservoir. "We’re getting more power out of the same reserves without making large incursions on nature," says Bard Hammervold, Hydro Oil and Energy’s communications manager.

The unmanned station is controlled remotely by the company’s operations center at Rjukan. Upgrades included two new GE Pelton turbines (Figure 6) that use an average of 700 cubic feet of water per second. The new station is well out of sight—5,200 feet inside a mountain—and uses 13 additional miles of tunnels to bring water from the Tyin Reservoir. Engineers at Hydro made sure that when constructing the new tunnel system they linked it with the old system to increase overall plant efficiency. 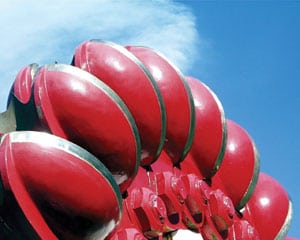 6. Massive. The giant GE Pelton turbine wheels used in the new Tyin power plant in Norway, with a diameter of 13 feet and an average throughput of 700 cubic feet of water per second, are crafted from one solid block of stainless steel.
Courtesy: Hydro Oil and Energy