According to a new study from Emerging Energy Research, more than $20 billion will be spent on carbon capture and storage (CCS) projects this year at 50 power generation projects totalling 16 GW around the world. The European Union (EU), with an investment of $11.6 billion, leads all efforts, because it is pressed to achieve a target to reduce carbon emissions by 20% of 1990 levels by 2020. In December, the governing body reached agreement on a climate and energy package, which includes a framework for CCS and a directive on the way EU members and Norway will regulate licenses to ensure reliable carbon storage. The U.S. takes second place, earmarking $6 billion, and Canada is third, at $2.7 billion.

The report optimistically predicts that if these demonstration projects are successful, CCS strategies will be "well-positioned to scale" after 2016. The assessment is plausible: Though the technology is in its infancy — and no complete, full-scale CCS projects have been built — some successes have been reported.

Norway in particular has been trailblazing. The country is not an EU member, but it has nonetheless committed to reducing carbon emissions by 30% by 2020 compared to 1990 levels. In 1991, its government became the first in the world to impose a federal tax on atmospheric carbon dioxide emissions from combustion-based point sources. It then allocated a substantial portion of these funds for CCS research programs. At the same time, it developed a supportive legal framework, for example, by resolving liability issues for the sequestered carbon dioxide. According to a study published this February in the journal Science for Environment Policy, this has led to the accumulation of a high-quality knowledge base and has prompted industry to pioneer innovative capture and storage technologies.

The results speak for themselves: Thirteen years have passed since Norway’s StatoilHydro and the oil and gas partners ExxonMobil and Total started capturing carbon dioxide from the Sleipner gas field and storing it 1,000 meters beneath the Utsira formation in the North Sea. The company conducts extensive monitoring and control of the carbon dioxide in the subsurface store and collects four-dimensional seismic data every other year.

This March, StatoilHydro announced that the seismic data confirmed the gas in the sandstone formation is not leaking out but is spreading through the structure as expected. The 10 million tons of carbon dioxide that have been injected into formation currently cover about three square kilometers (km2) of the roughly 26,000 km2 available in Utsira. "In addition to seismic surveys, we monitor wellhead pressure," Edvin B Ytredal, vice president of operations for the Sleipner area, explained in a press release. "These measurements show stable results, which again demonstrate that the reservoir is well suited for storage."

StatoilHydro has also been actively pursuing solutions to capture carbon emissions from combustion-based point sources. Earlier in February, it provided the government with a detailed plan for the establishment of a full-scale CCS facility at a combined heat and power plant (CHP) under construction at an oil refinery cracker at Mongstad (Figure 2). The CHP plant is expected to produce 280 MW of electricity and 350 MW of heat energy. 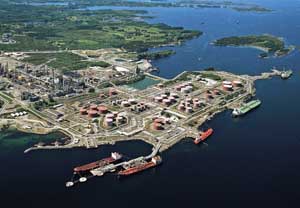