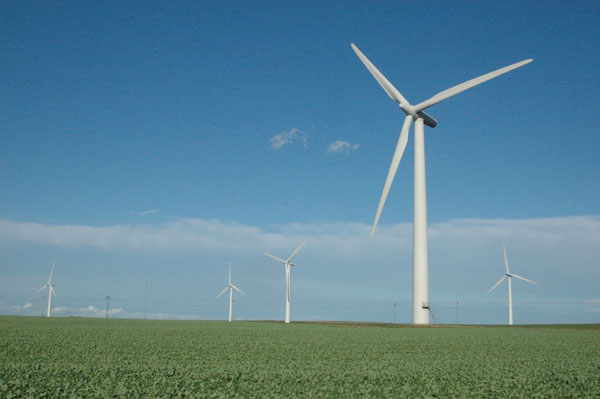 Contrary to widespread suggestions that abundant supplies and low prices for natural gas are pushing out wind and solar, the resources are in fact long-term allies that are likely to force other generation to the sidelines in the future.

That’s the conclusion of a new report from the Brattle Group released last month. Though the analysis focused on the Electric Reliability Council of Texas (ERCOT) region, the authors suggest the insights are applicable in other states and countries. The report was sponsored by the Cynthia and George Mitchell Foundation. (George Mitchell was one of the industry pioneers who developed the techniques necessary for economic shale gas recovery.)

Within the last decade, the ERCOT region has led the nation in installed wind capacity and shale gas production. Texas currently has almost 69 GW of gas-fired capacity, most of it added between 2000 and 2005. The state is the leading producer of natural gas, but also the leader in wind, with 12 GW of capacity—far more than any other state. Much of this wind capacity was added in the late 2000s as high gas prices limited gas-fired capacity. The recent fall in natural gas prices, however, has led to concern that cheap gas-fired power is undercutting incentives to build renewable capacity.

The report argues that this concern focuses too much on installation costs and ignores the advantages that keep renewable capacity competitive, as well as the significant synergies between gas and renewables. In the short term, despite low gas prices, renewables are called upon first, especially in competitive markets, because they have the lowest variable costs.

“No matter how cheap natural gas becomes, renewable energy sources, such as wind and solar PV, are almost always the resource with the lowest variable cost because they have no fuel cost,” the report notes.

This is true even for the most efficient gas plants, which can be dispatched at around $30/MWh. The disparity is even greater for wind, at least as long as the Production Tax Credit (PTC) is in place, since it allows wind generators to bid into the market at a zero or negative cost. “As a consequence, renewable resources are always cheaper, and will be chosen to sell all their power whenever the wind blows or the sun shines regardless of the current price of gas.” Not only that, added renewable capacity often pushes out gas rather than coal because the cycling costs for coal plants are such that it makes more sense to keep them running even when operating is unprofitable.

In the long run, of course, things are different, because gas plants are currently cheaper to build and operate than renewable plants. “When natural gas supplies are available at low cost, and predicted to remain so in the long run,” the report says, “studies tend to show that the life cycle costs of a gas-fired plant are cheaper than a renewable-only plant.” Even with zero fuel costs, renewable power plants have not been profitable without specific mandates and/or subsidies. Nearly all utility scale wind and solar capacity has been built not because it was the cheapest option but because its construction was required or subsidies made it economically attractive.

The report, however, goes to some length to point how that these analyses, which are nothing new to most industry observers, exist largely in the abstract. In real-world day-to-day operation, gas and renewable capacity complement each other to a degree sufficient to push out other options.

“Adding controllable gas-fired plants hand-in-hand with wind and solar plants produces benefits for the entire grid because the latter’s output is not dispatchable and the grid operators have little control over their output,” the report notes.

Texas’s large wind capacity has resulted in substantial ramping episodes that need to be backed up by gas-fired generation. In 2009, the report notes, ramping events averaged five hours, and ranged from 4,613 MW up to –4,788 MW down.

“Since natural gas resources are more flexible than nuclear and coal plants and can ramp up and down to complement wind output without incurring huge costs, they are very well suited for smoothing out spikes and dips caused by the mismatch between wind generation and demand,” the report observes.

Because, as noted, increasing renewable penetration can lead to periods at which coal resources must operate at a loss or incur cycling costs, owners of some coal plants may simply chose not to run their plants at all except during periods when the risk of negative pricing is low. This increases the chances that older, inflexible coal plants may be forced into retirement.

The report comes with a couple of caveats.

First, future price trends will have a large effect on the degree to which gas and renewables can support each other. Thanks to the development of shale gas, which has led to abundant supplies, especially in Texas, natural gas prices are projected to remain moderate and relatively stable. They are, however, projected to rise gradually through the next few decades. Renewable capacity costs, by contrast, are expected to continue their decline as manufacturing technologies advance and economies of scale are captured. While the decline has been greatest with solar, wind is also expected to see a steady decline. ERCOT’s most recent long-term assessment shifted almost 10 GW of forecast new capacity from gas to wind and solar.

This shift is an illustration that renewable capacity in some favorable areas is approaching the ability to compete on its own economic merits. The report notes that within the U.S. Energy Information Administration’s gas price range of $4/MMBtu to $6/MMBtu through 2030, in the Texas panhandle—where conditions are favorable enough to produce high capacity factors—many wind farms are competitive with gas even without the PTC.

The second caveat is political. Texas’s shale boom in many ways is a result of its historic support of oil and gas development and a highly favorable regulatory environment. In particular, the development of gas pipelines within the state is largely free of red tape, making it easy to construct the necessary gathering infrastructure. The sector’s growth has been so substantial that it has outstripped the ability of ERCOT’s grid to support it, and many gas developers have had to resort to self-generation. Thus, while other areas of the country, such as the Northeast, continue to struggle with pipeline constraints, ERCOT has determined that this is one area in which its resources are sufficient. This favorable regime, of course, does not exist everywhere.

Renewables have also benefitted from favorable regulations and support, but there are signs this may be coming to an end. As the report notes, various groups are seeking to end an assortment of state-level renewable subsidies in Texas, and the American Wind Energy Association has endorsed a gradual phase-out of the PTC by 2019. Texas has a robust renewable portfolio standard (RPS), but one that the industry has already met—15 years early. While the RPS was an important catalyst for wind development in Texas, there is little indication it will be extended further.

Although net metering has supported solar PV development in other states, the policy is relatively rare in Texas, as it is merely optional for utilities. Texas has also had to implement support for additional transmission resources in order to integrate its large wind fleet. Finally, an uncertain federal regularly environment, especially for coal, means the future generation mix is unclear.

The report concludes with some recommendations that could enhance gas and renewable synergy.

The first is enhancing long-distance transmission capability, both within and between regions, which will improve the ability of renewable generators in areas far from population centers to contribute to the generation mix. The second is resolving the challenges in net metering policies. Though net metering has supported solar PV development, the pricing inefficiencies it creates have generated increasing problems for utilities. “In the long run,” the report notes, “either net metering rules will need to be reformed and/or more efficient policies towards renewable energy—such as providing distributed solar PV with pricing that reflects the value of generating power during times when demand for power is high—will need to be implemented.”

The report also recommends continuing RPS support and shifting ERCOT to a percentage basis mandate from the current MW total.  It also notes that a carbon price, though of uncertain likelihood on a national scale, would provide support for both gas and renewables.

The report is the first part of a two-part study being conducted by the Brattle Group on gas-renewable integration in ERCOT. The second half, which will examine the impacts of renewable policies under a variety of future scenarios, will be released later this year.