A team of Penn State engineers say that a tiny self-perpetuating microbe can take electricity and directly convert carbon dioxide and water into methane, potentially producing a portable energy source with a carbon-neutral footprint.

Methanogenic microorganisms produce methane in marshes and dumps, but scientists thought that the organisms turned hydrogen or organic materials, such as acetate, into methane. However, the researchers found, while trying to produce hydrogen in microbial electrolysis cells, that their cells produced much more methane than expected. "All the methane generation going on in nature that we have assumed is going through hydrogen may not be," said Bruce E. Logan, Kappe Professor of Environmental Engineering, Penn State. "We actually find very little hydrogen in the gas phase in nature. Perhaps where we assumed hydrogen is being made, it is not."

Logan, working with Shaoan Cheng, senior research associate; Defeng Xing, postdoctoral researcher; and Douglas F. Call, graduate student, environmental engineering, confirmed that the microscopic organisms produced the methane (Figure 1). The researchers created a two-chambered cell with an anode immersed in water on one side of the chamber and a cathode in water, inorganic nutrients, and carbon dioxide on the other side of the chamber. They applied a voltage, but recorded only a minute current. The researchers then coated the cathode with a biofilm of Archaea. Not only did current flow in the circuit, but the cell produced methane. 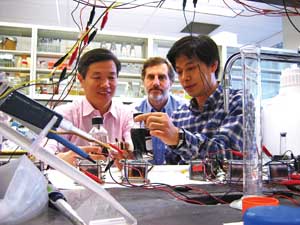 1. CO2, a potential fuel source? Penn State engineers say that a self-perpetuating microbe can directly accept electrons and use them to convert carbon dioxide and water into methane. That methane could potentially be used for off-peak capture of renewable power in a portable fuel. This image shows researchers Shaoan Cheng (left) and Defeng Xing (right), as Bruce Logan looks on, working with a cell that produces the methane. Courtesy: Penn State

"The only way to get current at the voltage we used was if the microbes were directly accepting electrons," said Logan. He noted that the electrochemical reaction takes place without any precious metal catalysts and at a lower energy level than converting carbon dioxide to methane using conventional, nonbiological methods.

Logan suggests using the method to create a portable fuel while capturing off-peak renewable energy. Methane is preferred over hydrogen because a large portion of the U.S. infrastructure is already set up to easily transport and deliver methane.