In Part I of this two-part report ( COAL POWER, July/August 2007, p. 22), we introduced the integrated R&D effort by the U.S. Department of Energy’s National Energy Technology Laboratory (DOE/NETL) to improve understanding of the mechanisms of mercury (Hg) capture and retention in flue gas desulfurization (FGD) systems and the fate of Hg in FGD gypsum during wallboard production or material disposal. We explored some of the details of mercury emissions from coal-fired power plants — such as the existence of mercury in particulate-bound (Hg P), oxidized (Hg 2+), and elemental (Hg 0) forms — and the dependence of its removal rate on flue gas treatment, including selective catalytic reduction (SCR) used for NO x control. We also described several field tests of FGD additives for maximizing Hg capture.

In Part II of this report, we explore Hg 0 re-emission issues, the effect of additives on wet scrubber operation, and the fate of Hg in FGD by-products.

Oxidation of flue gas Hg 0 followed by absorption of Hg 2+ across a wet FGD system (scrubber) could be a reliable and cost-effective Hg control strategy for coal-fired utilities. However, field testing has revealed that Hg 2+ captured by a wet scrubber can be chemically reduced within the vessel and re-emitted as Hg 0. Note that Hg 0 re-emissions are quantified as a net increase in Hg 0 concentration across the FGD system. The following NETL-sponsored research projects are examining methods to increase Hg capture across FGD systems and inhibit the Hg re-emission mechanism.

FGD kinetics. URS Group Inc. is conducting bench-scale testing to determine the mechanisms and kinetics of aqueous reactions of Hg absorbed by wet FGD systems. It also aims to develop a kinetics model that predicts Hg reduction and re-emission reactions in wet FGD systems over a range of chemical conditions. The underlying hypothesis of this project is that Hg re-emission reactions (apparently driven by SO 2 -derived "sulfite" species in the liquid phase) are limited by kinetics rather than equilibrium. This work is determining the effects of temperature, ionic strength, initial reactant concentrations, pH, chloride, thiosulfate, and other complexing agents on Hg re-emission kinetics.

A chemical kinetics model has been developed to describe the aqueous Hg-sulfite-chloride-thiosulfate system. The model predicts the basic trends seen experimentally for pH, sulfite, and chloride effects, and it provides fairly good numerical agreement with experimental data. The model will be verified via bench-scale wet FGD tests to determine if it accurately predicts the tendency for Hg re-emissions and the phase in which Hg is found in FGD by-products. The validated model will be run over a range of potential wet scrubber operating conditions to determine conditions that minimize Hg re-emissions.

Analysis of Hg concentrations in major process streams at each of these units determined that Hg in wet FGD slurry is associated with the fines, rather than the larger gypsum particles or the aqueous phase. This finding is significant because the Hg-rich fines can be disposed of separately, while the larger gypsum crystals can be reused to produce a gypsum product low in Hg content.

URS Corp. (www.urscorp.com) conducted pilot- and full-scale field tests of another wet scrubber additive, Degussa Corp.’s TMT-15 (www.degussa.com). The TMT-15 additive is designed to precipitate absorbed Hg as a stable salt, thereby minimizing Hg 0 re-emissions and lowering scrubber liquor Hg concentrations. The project also assessed whether this same additive can be used to minimize Hg in reused scrubber solid by-products, through separation of fine Hg-containing salts from the remainder of the by-product. 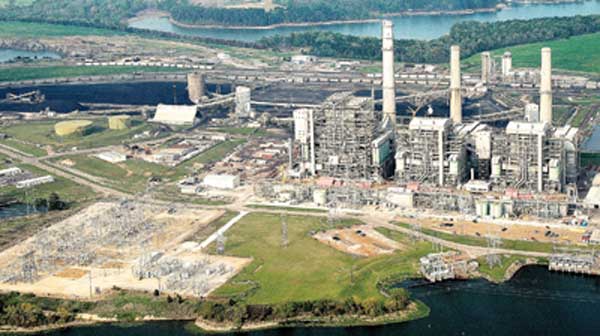 The TMT-15 pilot-scale injection tests produced inconclusive results for suppressing Hg 0 re-emissions. At MoSES Unit 3, such emissions were absent — even without TMT-15 addition — and at Plant Yates there were issues with Hg semi-continuous emissions measurement. However, pilot-scale TMT-15 addition had the anticipated impact on scrubber by-products: Scrubber liquor Hg concentrations were significantly reduced during testing at both MoSES Unit 3 and Plant Yates Unit 1. Following fines separation, FGD gypsum Hg concentrations at these units were reduced about 15% to 30% by the addition of TMT-15. TMT-15 addition did not appear to have any adverse effect on operation of the wet FGD pilot unit. In particular, concentrations of species other than Hg in the scrubber liquors did not appear to be affected, SO 2 removal percentages remained high, and gypsum by-product particle size distributions were not greatly affected.

The Fate of Hg in FGD By-Products

The use of FGD as a mercury capture technology raises questions about the potential for atmospheric and groundwater releases of Hg from scrubber solids and synthetic gypsum products during reuse or disposal. Answering those questions requires understanding the chemistry of the Hg – coal utilization by-products (CUB) interaction. Knowing the chemistry enables prediction of the environmental fate of mercury bound to CUB and anticipation of the effect of additional Hg loads in CUB material.

The stability of Hg during FGD gypsum drying was studied by collecting samples before and after a natural gas – fired heating unit, which reduces the moisture content of the FGD solids for ease of handling during the wallboard manufacturing process. Results indicated that within analytical precision, no Hg desorbed during drying of free moisture.

Settling and leaching studies. NETL/ORD also conducted settling and leaching experiments using scrubber slurry samples in an attempt to isolate the Hg-binding phase from bulk gypsum. During settling, Hg partitioned almost exclusively to the top, slower-settling layer of the slurry. Analysis of this residue revealed that both Hg and Fe were enriched in the top layer by factors of about 20 and 10, respectively.

Meanwhile, Hg was not mobilized during scrubber slurry leaching experiments using a continuous, stirred-tank extractor. This is indicative of strong chemical, rather than physical, adsorption of Hg. As a result, it is believed that Hg sequestered in FGD gypsum is primarily bound to an iron-rich phase, such as iron-coated clay materials or iron oxide/hydroxide particles, probably introduced with the limestone used as the SO 2 -capture reagent.

Additional research has also shown that some Hg retained in FGD gypsum requires hydrogen peroxide oxidation for release, such as a phase containing sulfides or carbonaceous materials. Hg not bound in either of these two fractions is likely a precursor to Hg 0 that could form via mechanisms proposed by URS for the Hg-sulfite-chloride-thiosulfate system described above.

Leach testing is also being used to evaluate the impacts of pH and oxidation-reduction potential (ORP) on Hg mobility in scrubber by-products. Leaching of six FGD materials to pH >2 under aerobic conditions failed to mobilize appreciable amounts of Hg. Though no Hg was released to the leachate during experiments with pH >4 and ORP >100 mV, dissolution of the major immobilized form of Hg was complete with pH <1 and an ORP of about 350 mV. Consequently, NETL/ORD researchers concluded that the Hg-retaining phase will immobilize Hg in many reuse applications. A possible exception would be the use of scrubber by-products for mine-land reclamation, which may expose them to acidic, anaerobic conditions.

Hg in wallboard. The extramural thrust of DOE/NETL’s CUB research focuses on the fate of Hg in FGD gypsum during wallboard production and ultimate disposal. For instance, TVA evaluated Hg retention in gypsum from three sources: a mercury-amended commercial calcium sulfate, a laboratory-scale wet scrubber, and a full-scale wet scrubber. TVA researchers concluded that no Hg would evolve from disposed FGD by-products at temperatures up to 140F, while noting the occurrence of thermal desorption of Hg from FGD gypsum at about 400F.

USG Corp., a manufacturer of building materials, is providing data on the extent and location of Hg loss during the wallboard production process, as well as information on the potential for Hg leaching at the end of the wallboard lifecycle, when it is disposed of in municipal landfills. FGD gypsum evaluation tests from six different power plant/FGD feedstock variations have been completed to investigate the impact of different configurations on the stability of Hg during wallboard production. Testing included the use of FGD gypsum produced during TMT-15 injection into a power plant scrubber. 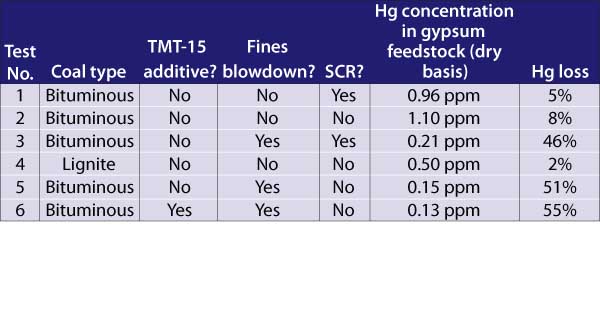 Working collaboratively with power plant operators, EPRI, academia, state and local agencies, a host of research organizations, and the U.S. EPA, DOE/NETL is field-testing a suite of potential Hg control options for the growing number of coal-fired stations using wet scrubbers for SO 2 control.

Hg oxidation enhancement technologies that use halogenated salts or SCR or gold-based catalysts show significant promise for enhancing co-removal of water-soluble Hg 2+ across a wet scrubber. For example, a two-week test at TXU/Luminant Power’s MoSES Unit 3 demonstrated 86% average total Hg capture with a CaBr 2 injection rate of 113 ppm Br in the coal. Hg measurements conducted at three bituminous coal-fired units showed that average total Hg capture across the wet scrubber increased from about 50% to 90% with an SCR system operating upstream.

Enhancing Hg capture across a wet scrubber slightly increases Hg concentration in FGD by-products. As described earlier, research conducted by NETL/ORD (and others) has shown that Hg mobility is generally limited during FGD slurry leaching. The agent responsible for Hg immobilization in FGD gypsum appears to be an iron-containing phase with settling properties significantly different from those of bulk FGD gypsum. As a result, Hg sequestered in this iron-rich residue could potentially be removed from bulk gypsum prior to its use as feedstock for wallboard production.

DOE/NETL will continue to investigate the capture and subsequent fate of Hg in FGD materials and develop, as needed, management strategies to promote the stability of Hg throughout the lifecycle of FGD by-products.

The authors would like to acknowledge the contributions to this article by William W. Aljoe, Karl T. Schroeder, and Candace L. Kairies of DOE/NETL, and James T. Murphy of Science Applications International Corp. We also thank the U.S. EPA, EPRI, the coal-fired utilities that provided host sites for the testing discussed, and the participating research organizations and academic institutions.