New York Mayor Michael Bloomberg recently gave a presentation in Washington, where he stated: “Coal is dead.” Fortunately, both for the prosperity of the United States and the goal to alleviate poverty for billions of people across the world, Bloomberg’s projection is much different from what is actually happening.

First, over the last decade coal was the world’s fastest growing fuel, and that growth is continuing—coal will be the leading fuel of the present decade as well, producing more electricity than natural gas, oil, nuclear, wind and solar combined. Second, even in the United States, where the assault on our most important energy resource has been relentless (some of this attack has been funded by $50 million from the mayor himself) coal maintains its role as our leading electricity source—producing more than 42% of our power over the past five years alone. Finally, Bloomberg totally ignores the rise of low emission coal consumption, the benefits of higher efficiencies, the ongoing construction of hundreds of supercritical power plants and the opportunities of carbon capture, utilization and storage (CCUS). Political rhetoric produces not one kWh of power, but the dynamic world of coal means more people, living better and living longer  (Figure 1).

Back to the Future: Coal Will Soon Be the World’s Leading Fuel 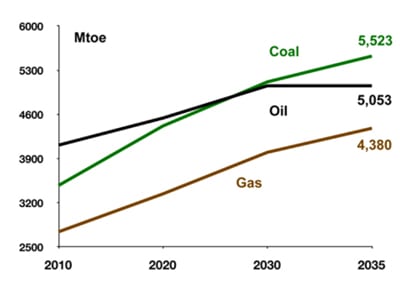 Electricity is the lifeblood of modern society. Beneficial electrification through coal opens the door to utilizing America’s most valuable energy resource as well as enhancing the quality of life in a growing nation. By 2030, the United States will have a population approaching 375 million people—about 225 million more than existed in 1950. The amount of electric power required to meet the needs of this increasing population will be staggering. Coal is the only fuel that can meet that demand at scale (Figure 3).

Advanced supercritical and ultrasupercritical coal generation utilizes less fuel and produces more power with reduced emissions. Improving efficiency levels increases the amount of energy that can be extracted from a single unit of coal. Such increases in the efficiency of electricity generation are essential in meeting climate change goals. A 1 percentage point improvement in the efficiency of a conventional pulverized coal combustion plant results in a 2% to 3% reduction in CO2 emissions. Such advanced coal plants emit almost 40% less CO2 than many existing plants. The average global efficiency of coal-fired plants is currently 28% compared to 45% for the most advanced plants (Figure 4). 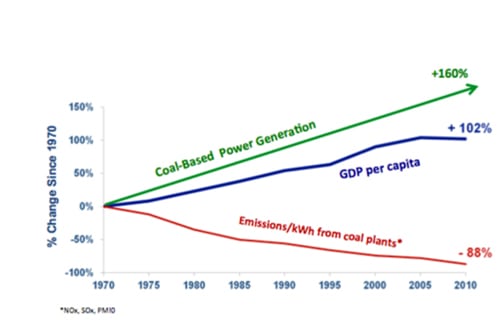 Now the gaze of the scientific and engineering community has shifted to controlling and utilizing CO2 in such processes as enhanced oil recovery (EOR)—a technology even the National [sic] Resource Defense Council has called a “win-win.” Comments such as those from Bloomberg are environmentally counterproductive since they delay the implementation of the clean coal technologies that can provide power for the vast numbers of children, women, and men suffering from the blight of energy poverty.

The global coal reserve far exceeds that of both oil and natural gas, and the United States has 27% of the world’s coal endowment. America’s coal is an international resource. The unreasonable attacks on coal cruelly deny the opportunities for literally billions of people to escape the grim reality of life without electricity, to drink cleaner water, eat more wholesome food, learn to read, and live longer lives. The urgency of sustainable coal has never been greater.

—Contributed by Dr. Frank Clemente, a member of the Graduate Faculty at Penn State and former director of the University’s Environmental Policy Center. This commentary was original published by Energy-Facts.org and is reprinted, with minor changes in style, by permission.