Energy provider ScottishPower on May 29 flicked on the switch of a carbon capture and storage (CCS) pilot program at its 2,304-MW coal-fired Longannet power plant, in Fife, Scotland, marking the beginning of a seven-month test — and the first time a UK coal-fired power plant has reportedly attempted to capture its carbon emissions.

The prototype, developed by Norwegian firm Aker Clean Carbon, is an exact, 1-MW replica of the full-scale carbon capture plant (Figure 6). It will use Aker Clean Carbon’s postcombustion capture process, which employs an amine solvent to remove carbon dioxide from flue gas. If successful, ScottishPower could use the technology to scale up the prototype and deliver a full CCS demonstration project by 2014 — a timescale that aligns perfectly with the UK government’s plans. 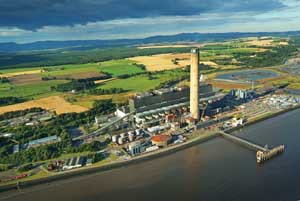 6.     A carbon footprint. ScottishPower in May switched on the UK’s first reported 1-MW prototype of a full-scale carbon capture plant at its 40-year-old Longannet coal-fired power station in Fife, Scotland. The prototype employs Norwegian firm Aker Clean Carbon’s postcombustion amine solvent process. If ScottishPower wins a government carbon capture and storage competition, it could receive £1 billion to fund the project and deliver a full demonstration project by 2014. Courtesy: ScottishPower

But ScottishPower has yet to gain the UK government’s backing for the project. The company is in competition with two other contenders — E.ON and Peel Power — in a government contest, whose winner would secure £1 billion in funding for a postcombustion technology that captures 90% of emitted greenhouse gases at a 300-MW to 400-MW coal-fired unit. E.ON in June opted for Mitsubishi Heavy Industries’ KM-CDR process, which uses a proprietary solvent (KS-1) for CO2 absorption and desorption.

If E.ON wins, it said it would use that technology to build a capture plant at its proposed — and highly controversial — 1,600-MW supercritical pressure coal plant proposed for the Kingsnorth Station in Kent. Peel Power, meanwhile, has joined forces with Denmark’s DONG Energy and Germany’s RWE to build a facility — though its scope has not been described yet. The government is expected to announce the winner this summer.

Aker’s prototype at Longannet weighs 30 metric tons, covers an area of 85 square meters (m), and is said to process 1,000 m3 of exhaust gases per hour. The two companies will now test the technology to determine how much heat is required to break the bond between CO2 and the amine, and how long the capture chemical can keep capturing CO2 effectively. They also plan to test three different amine solutions over seven months.

Aker, whose technology is also in use at the Mongstad project in Norway, said in a release in May that early results from tests at a gas power plant show a capture rate above 85%, and that the amines had successfully demonstrated lower energy requirements and less degradation.