Denmark’s Risø DTU National Laboratory for Sustainable Energy in late April announced it had connected the world’s first polymer solar cell plant to the grid. The achievement follows years of research into the novel photovoltaic (PV) technology that has been touted as a future inexpensive, flexible, and customizable alternative to silicon crystal solar cells.

The demonstration plant was developed by the Risø researchers in cooperation with Danish companies Mekoprint — which specializes in "roll to roll" production of flex-print and printed electronics — and Gaia Solar. It consists of a single 1-meter-by-1.7-meters panel made of 24 solar cell modules, each measuring 20 cm by 25 cm (Figure 5). The active layer of the cells is polymer-based, developed using roll-to-roll methods in ambient air. The panel, placed on a tracker, produces 11 W, about 7 W of which is passed on to the grid. 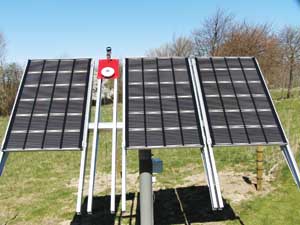 5. Plastic PV power. Danish researchers at the Risø DTU National Laboratory claim to have connected the world’s first polymer solar demonstration power plant to the grid. The experimental panel measures 1 meter by 1.7 meters and comprises 24 solar cell modules, each 20 cm by 25 cm. The panel, placed on a tracker, produces 11 W, about 7 W of which is fed to the grid. Courtesy: Risø DTU National Laboratory

According to Risø innovation and business developer Torben Damgaard Nielsen, though the achievement at Risø — among the world’s five public/private entities dealing with the practical manufacturing of polymer solar cells — was a milestone, the technology continues to face a variety of hurdles before it can be commercially competitive with silicon crystal solar cells. Among the key issues to be dealt with are improved lifetime efficiency, lowering the cost of materials, improving processing speeds, and cultivating markets that are ready for application, Nielsen told POWER.

Risø said it has already made great strides in improving the technology’s cost-efficiency: Last June, it cost €4,500/W; prices have since dropped to €15/W as of March 2009. The institution expects the price of the cells to be €4/W to €5/W by the end of this year.

Progress is also evidently being made around the world. Last year, Massachusetts-based Konarka Technologies opened a factory to commercially produce polymer solar cells, though that company’s initial cells are 3% to 5% efficient and only last a couple of years. Experts have said that to be commercially viable, plastic cells must reach an 8% efficiency to compete with the maximum 40% achieved by conventional cells.

But that goal, too, may be within reach. In April, U.S. and South Korean scientists at South Korea’s Gwangju Institute of Science and Technology (GIST) claimed to have engineered an approach that improved efficiencies of plastic solar cells to a record-breaking 6.2%. "When under green light, the new plastic cell achieved 17.2% efficiency. By combining new materials that absorb light better and have higher open circuit voltage with titanium-suboxide, we were able to get more energy from the charged electrons within the layers,’’ Lee Kwang-hee, a GIST professor of materials science, told the Korea Times. "Considering that plastic cells could be bent and folded and are cheaper to produce, commercial potential is enormous. They can be used for portable recharging devices and on glass, roof tiles, parasols and probably even clothing."