The Lower Colorado River Authority (LCRA), which supplies power to much of central Texas, has begun the process of replacing its aging Thomas C. Ferguson Power Plant about 40 miles northwest of Austin (Figure 1). The 420-MW gas-fired steam plant, which came online in 1974, will be replaced with a modern 540-MW combined cycle plant by Fluor Corp. Construction is expected to begin this year, with completion projected for mid-2014. The new plant will be among the most efficient, reliable, and environmentally benign units in Texas. 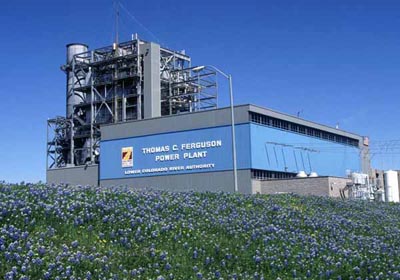 The notice to proceed was issued in November after required air permits were issued by the Texas Commission on Environment Quality and the Environmental Protection Agency (EPA). The plant will comprise two GE Frame 7FA gas turbines, two heat recovery steam generators, and a 195-MW Toshiba steam turbine. The project is expected to cost $520 million to $550 million.

Fluor is providing engineering, procurement, and construction services for the project. The engineering and procurement phase, which will last for several months, is currently under way. When the plant comes online, it will be the first combined cycle plant in the Electric Reliability Council of Texas (ERCOT) region that meets the latest EPA greenhouse gas regulations.

"We are delighted LCRA has received the required air permits and has given Fluor a full notice to proceed on this new clean energy project in Texas," said Dave Dunning, president of Fluor’s Power Group. "Our significant EPC experience in Texas will allow us to staff this project with many quality local hires while capitalizing on our experience installing nearly 60,000 MW of gas-fired capacity over the past 20 years."

Plant Will Meet a Variety of Needs

The existing Ferguson plant currently operates only during periods of peak demand. Replacing it will help LCRA provide its wholesale customers with more competitively priced power, because the new plant (Figure 2) is projected to be about 30% to 40% more efficient. LCRA expects that the new plant will be able to respond more quickly to demand, reduce transmission congestion costs in the ERCOT Nodal Market, and help maintain more reliable service to the rural Texas Hill Country, a region with limited generation resources. 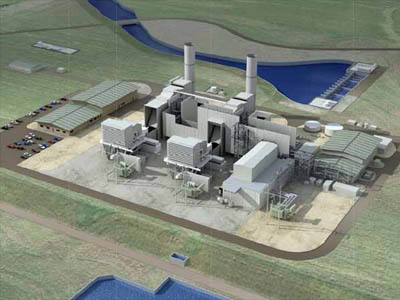 2. The new Ferguson plant will produce up to 540 MW in combined cycle mode. Courtesy LRCA

“This is a firm commitment from LCRA that we are moving forward with this advantageous project,” said LCRA General Manager Becky Motal. “Our customers will benefit from our ability to better manage costs with a plant that will use about 35 to 40% less fuel than traditional gas-fired plants, and the community will benefit from the latest environmental controls and a contribution to the local economy with the plant’s construction.”

It is an addition that is sure to be welcomed. Over the past year, ERCOT has struggled with a reserve margin that has dropped below 20% and is projected to fall under 15% this summer—levels that are substantially lower than other regions. Because ERCOT is an "energy-only" market, electricity prices alone (which are capped at $3,000/MWh) are relied upon to spur construction of new capacity. With prices remaining stubbornly low, the motivations for investors to enter the market have been limited. During last summer’s heat wave, ERCOT was forced to bend its own rules and bring several mothballed plants back into operation to meet demand.

Speaking at a panel discussion at the IHS CERAWeek conference in Houston last month, representatives from ERCOT, the Public Utility Commission of Texas (PUCT), and several private generation and transmission companies agreed that improvements in the region’s demand response were needed, and that attracting investment in new capacity has been a challenge in recent years—very little new nonrenewable generation has been added. Though support for ERCOT’s competitive market is still solid, Ken Anderson of the PUCT reminded the audience that better ways needed to be found to offer power investors a good return. And, sometimes forgotten is that power markets compete with other capital markets for investment, with considerations well beyond electricity rates.

In the case of the new Ferguson project, LRCA expects to recover its capital costs through the cost-based rates it charges its wholesale customers.

Meanwhile, a study released in March chided Texas for failing to take better advantage of its large natural gas resources. In contrast to the national trend over the past five years, Texas has seen flat-to-declining market share for gas-fired power. Though Texas is the nation’s largest gas producer, it still gets about 40% of its power from coal-fired plants, and most of that coal is imported from out of state.

The study, by University of Houston professor Michael J. Economides and petroleum engineering consultant Philip E. Lewis, argues that failing to take advantage of locally produced natural gas cost the state economy $7.7 billion in lost revenue and wages from 2005 to 2011 and $2.5 billion in 2011 alone. The costs in environmental impact are also substantial.