The U.S. Environmental Protection Agency (EPA) has described landfills as an "effectively untapped resource" for renewable energy. The agency estimates that landfills are the source of about 12% of global methane emissions. (Methane is about 21 times more powerful as a greenhouse gas than CO2.)

The EPA estimated that there were some 1,000 projects around the world currently devoted to recovering landfill gas (LFG) for sale to customers. As of December 2007, approximately 445 LFG energy projects (Figure 6) were operational in the U.S., according to the EPA. They generate approximately 11 billion kWh of electricity per year and deliver 236 million cfd of LFG to direct-use applications. 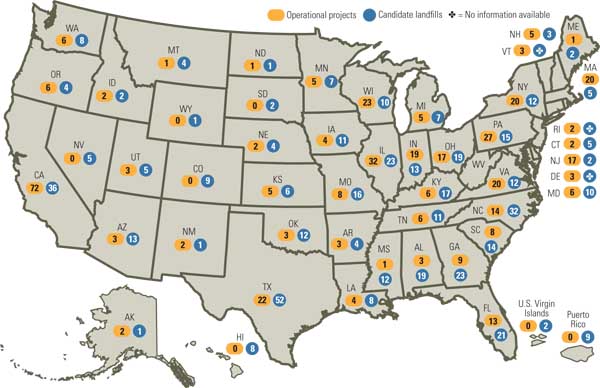 6. Talking trash. Not surprisingly, states with the largest and densest population centers have the highest number of current and potential landfill gas energy projects. Data are for December 2007. Source: EPA

Electricity for on-site use or sale to the grid can be generated using a variety of different technologies, including internal combustion engines, turbines, microturbines, Stirling engines (external combustion engine), Organic Rankine Cycle engines, and fuel cells. The vast majority of projects use internal combustion (reciprocating) engines or turbines; microturbine technology is being used at smaller landfills and in niche applications. Certain technologies, such as the Stirling and organic Rankine cycle engines and fuel cells, are still in the development phase.

The use of biogas (another name for methane produced from waste, manure, or other organic matter) for power generation is most developed in Europe, where Germany has 70% of the global market. In Britain, landfill gas makes up a quarter of the country’s renewable energy.

Among the many new LFG projects announced in the past few months were these:

Apparently, some folks don’t think the EPA is doing enough to encourage LFG power projects. On Oct. 23 the Environmental Defense Fund filed a notice of intent to sue the EPA for its failure to update emission standards for hundreds of landfills nationwide.