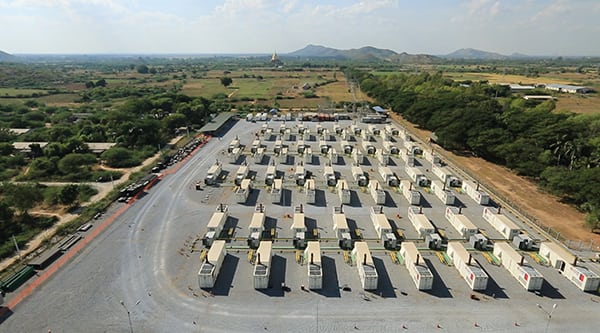 Emerging from decades of isolation, fragility, and conflict, Myanmar has, since 2011, ushered in a reformist government and embarked upon unprecedented political and economic reforms. Among those reforms has been opening the largest country in mainland Southeast Asia to the global economy. The country formerly known as Burma is counting on that effort to boost growth and reduce poverty.

One of the nation’s key ambitions is to increase its electrification rates. Only 29% of households—and only 16% in rural areas—had access to power in 2013. Rolling power cuts (and demonstrations against them) are commonplace, and the government’s response has been to plan an increase in generating capacity to 20 GW by the year 2030—up from the 4 GW installed by 2014.

Measures include harnessing abundant hydropower and natural gas resources. Nestled between the Tibetan Plateau and the Bay of Bengal, Myanmar is fed by three mighty river systems that run in the fertile valleys of several mountain chains. So far, Myanmar has identified at least 92 large-scale potential hydro projects with a total capacity of 46 GW (compared to the country’s estimated 100 GW of total resources). Meanwhile, over the past decade, it has increased its production of vast indigenous natural gas resources seven-fold to accommodate exports to energy-hungry neighbors Thailand and China. Despite gas supply issues stemming from those export commitments, Myanmar also has plans to substantially increase its own gas power capacity.

But first it must grapple with significant transmission and funding constraints. Although 70% of its population lives in rural and remote environments, the nation’s infrastructure is vastly underdeveloped and dilapidated—it sees transmission and distribution losses amounting to about 25% of electricity produced. At the same time, Myanmar’s power sector is just emerging from a period of financial tumult. A sharp increase in the cost of gas supply will require that the government prioritize high-efficiency gas plant projects in the future.

The consensus is that it will likely take years for Myanmar to develop enough permanent power plants to resolve its critical power shortages.

Taking into account the nation’s urgent need for power generation, APR Energy offered a simple but effective solution: the quick installation of a turnkey power plant that is customizable, scalable, and fuel efficient.

The company, which has its headquarters in Jacksonville, Fla., got its start just a decade ago, in March 2004, when cofounders John Campion and Laurence Anderson bought the Alstom Power Rentals division from French giant Alstom Power. By 2008, the company had been rebranded as APR Energy; by 2010, it doubled its fleet capacity size; and by 2011, it was publicly listed on the London Stock Exchange. Then in 2013, with regional hubs already established in Panama, Dubai, and Malaysia, the company also took on GE’s power rental business in a $314 million deal. Contracts have since been pouring in for diesel- or gas-powered modules spanning 35 MW to 100 MW from Australia and Argentina to Egypt, Botswana, Guatemala, Senegal, Libya, and Uruguay—countries reeling from power shortages and in dire need of rapidly deployable solutions.

When the state-owned Myanmar Electric Power Enterprise (MEPE) in February 2014 signed its initial contract with APR Energy for a gas module plant with a guaranteed minimum of 82 MW to be set up on a turnkey basis in Kyaukse, in the country’s central Mandalay region, the agreement became the first energy contract signed by a U.S.-based company since sanctions were eased in 2012.

MEPE’s priority was to find a bridging solution for the medium term while the country developed long-term power generation infrastructure. APR Energy won the contract due to its ability “to deliver to a very challenging timeframe, as well as for the efficiency of APR Energy’s power generation technology,” it said.

“In the bid process, the government allocated 19.5 million standard cubic feet of gas per day, and the key was to provide as much power generation as possible with that allocation,” Clive Turton, APR Energy’s managing director of the Asia Pacific region told POWER. “The high efficiency of our technology enabled us to offer a guaranteed output of 82 MW.”

But the government also insisted on a 90-day delivery so the plant would be available in advance of the annual dry season in spring, when hydropower generation is low. So, “We commissioned the plant just two months after signing the contract with MEPE,” Turton said.

This meant that by June 2014, APR Energy completed installation and put into operation the plant’s 68 four-stroke-cycle CAT G3516C low-emission gas engines (Figure 1). In March 2015, APR Energy commissioned a 20-MW expansion of the plant, bringing it to 102 MW.

APR Energy says the speed at which the plant was installed is wholly due to its modular approach. It chose the gas engine power module technology because it is “one of the most reliable and fuel-efficient natural gas power module packages within the temporary power market.”

The fuel system is designed for maximum performance on low-pressure pipeline natural gas with a methane number range of 55–100. The power module has an automatic load management system for utility baseload, soft loading/unloading, and power factor control. It also offers island-mode paralleling with other power modules and stand-alone operation with local or remote starting, synchronizing, and power control. The Kyaukse plant features an advanced control system that allows for automatic operation, initiated locally or remotely by a SCADA system. It is tied to the main grid and has an onsite substation.

Finding the personnel to install the modules didn’t prove problematic. APR Energy sourced about 70% of the workforce (about 200 construction workers and 65 employees) locally, providing valuable skills training and furthering economic development in the Kyaukse community, it said.

In spite of newly eased sanctions, when MEPE and APR Energy first announced the plant deal, U.S. Ambassador to Burma Derek Mitchell cautioned that “doing business in an emerging market economy does not come without its challenges, including the need to implement key economic reform policies, address infrastructure challenges, and make sure all benefit from the country’s economic potential.”

For APR Energy, however, the project has been “a breath of fresh air,” said Turton. “The government has been cooperative and helpful throughout our time in Myanmar. They were keenly interested in creating a solution that would demonstrate to the people of Myanmar the value of foreign investment and economic growth—and this project is helping to achieve that goal.”

Meeting the condensed timeframe was a more significant challenge, he said. Each of the 68 reciprocating engines, housed within a standard ISO 40-foot container, were transported from Durban, South Africa. The control room, in its own container, came in from Jacksonville, Fla. The switchyard was brought in from China; other components came from Dubai.

Construction of the plant then entailed leveling the seven-acre site chosen in Kyaukse by MEPE. It also required building out a feeder pipeline connected to the Shwe pipeline, which sends gas from Myanmar’s offshore fields in Rakhine province to China.

Turton said MEPE “was so pleased with the initial stage of the project that they contracted with us for an expansion to provide 102 MW of guaranteed capacity, which we commissioned ahead of schedule.”

A Block of Time

Today, the Kyaukse plant serves about six million rural residents and the growing industrial area south of Mandalay, the country’s second-largest city. For APR Energy, the plant is another success story for helping an emerging economy bridge its present power needs to future plans.

Given the interim nature of this bridging power solution, Turton cannot predict how long APR Energy will operate the 102-MW installation “We plan to operate the plant for as long as the government sees value, and we are looking for other opportunities in Myanmar,” he said.