Adding a selective catalytic reduction (SCR) system to an operating coal-fired plant may be an expensive and time-consuming project, but the environmental benefits are without question. However, once construction is complete and operations staff assume control of the SCR, proper measurement tools are required to monitor the catalyst performance life cycle.

The in situ approach is especially important given the Clean Air Interstate Rule requiring many coal-fired power plants to operate their SCR systems year-round, thereby extending scheduled major maintenance outages to as far as three years apart. The ability to monitor the activity of each catalyst layer at any time is essential with respect to catalyst management strategies and reduces SCR operating costs through optimized catalyst replacement scenarios. With multiple devices, each layer can be measured independently and, if desired, a number of individual measurements can be made across a single catalyst layer.

Although the traditional laboratory approach measures the activity (K) of an extracted sample and then uses the design area velocity (Av) with an estimate of the blockage to calculate the RP, KnoxCheck provides a direct measurement of RP. The in situ measurement technique is similar to the laboratory measurement, whereby a small auxiliary ammonia injection grid is located above the section of catalyst to be tested, and ammonia is added such that the local NH3/NOx ratio exceeds 1.0, and the maximum NOx reduction across the small test section is measured. It is important to emphasize that this is a measurement of the true RP value accounting for the actual flue gas flow rate and blockage values, not a calculated quantity based on the design area velocity and an estimate of the blockage. This true RP at actual operating conditions is necessary to make informed catalyst management decisions.

KnoxCheck has been successfully operated over the 2005, 2006, 2007, and 2008 ozone seasons, and the full 2009 year, at Alabama Power Co.’s Plant Gorgas Unit 10. FERCo personnel conducted the in situ testing at Plant Gorgas.
Though there are multiple test locations across each layer of catalyst, all the gas samples and ammonia injection controls were centralized into two cabinets (Figure 1). The probes for inlet and outlet NOx sampling and supplemental NH3 injection were installed in standard four-inch ports at the inlet and outlet of each catalyst layer. However, a similar system installed at a FERCo client site in Texas is configured for remote access via a secured VPN connection to the plant network. 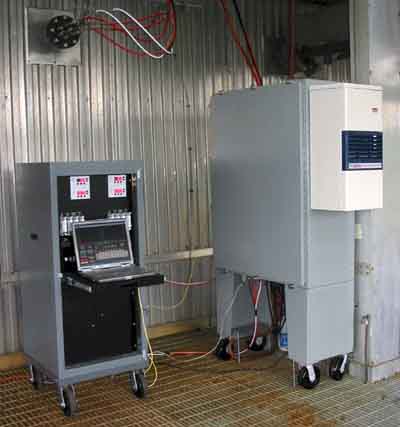 The results of the past five years of testing are shown in Figure 2, as a function of RP/RPo, where RP is the current measurement of RP and RPo is the value for the initial fresh, unexposed catalyst layer when the SCR started up in 2002. The RP/RPo results for the individual layers clearly reflect the effect of catalyst layer replacements (Layer 1 before the 2006 ozone season and Layer 2 during 2009) and also illustrate the deterioration of catalyst performance that occurs over time. 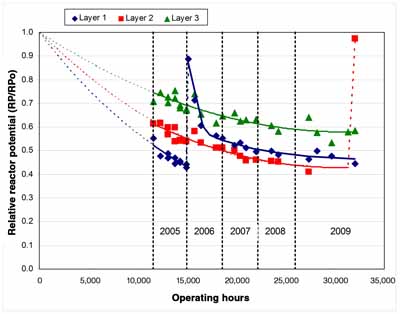 2. This graph shows the KnoxCheck reactor potential test results for the period of 2005 to 2009. RPo represents the reactor potential of the individual layers when freshly installed. Courtesy: Fossil Energy Research Corp.

The replacement of Layer 1 with new catalyst prior to the 2006 ozone season provided an opportunity to quantitatively compare the results of the in situ KnoxCheck measurements to both the activity provided by the catalyst vendor and an activity value provided by a third-party catalyst testing laboratory that tested an unused sample of catalyst. The results of this comparison testing showed a good agreement of the in situ KnoxCheck activity measurements to the vendor’s value of activity, as well as the third-party laboratory’s measurements. The KnoxCheck measurements were 6% higher than the value from the vendor, while the third-party laboratory’s value was 3% lower than the vendor’s reported activity.

FERCo expects to continue KnoxCheck measurements at Gorgas Unit 10 during 2010. In the near term, there are plans to incorporate the KnoxCheck systems into several new refinery SCR installations, as well as some gas turbine and biomass SCR applications.

—Randall A. Smith is a project engineer for Fossil Energy Research Corp.