Known for its beautiful glaciers, fjords, and mountains, Norway is a country of contradictions, especially when it comes to its citizensâ€™ attitude toward energy.

On one hand, many Norwegians support strong environmental policies to protect their nationâ€™s abundant natural resources. On the other hand, these same people have the highest per capita energy consumption in the world, which is due to their heavy reliance on electricity for home heating systems in the cold Nordic climate.

Furthermore, demand for electricity is increasing by approximately 2% per year. The countryâ€™s current population is estimated to be 4,644,400. Meeting the countryâ€™s growing appetite for energy will require Norwegian power companies to use innovative approaches to generate more electricity in an environmentally sustainable manner. The combined-cycle KÃ¥rstÃ¸ plant, north of Stavanger, is a step in that direction.

Nearly all of Norwayâ€™s power comes from renewable sources: Over 99% is generated by hydroelectric facilities. Opportunities for developing additional hydropower infrastructure, however, have been almost fully exploited, and during dry periods, Norway imports power mainly from coal-fired and nuclear power plants.

Norway also has substantial fossil fuel resources and is the worldâ€™s second-largest oil exporter. Oil and natural gas production has been increasing steadily. And Norway still owns approximately half of the remaining reserves of oil and gas in Europe. In the future, gas will play an even more dominant role in Norway, especially in light of the nationâ€™s continually rising demand for electricity.

By 2050, electricity production in Norway is expected to be supplemented by a growing number of gas-fired power plants. Current domestic consumption of natural gas will increase correspondingly, but only if CO2 emissions reduction measures are implemented simultaneously. Norway was one of the first countries to exhibit very high public sensitivity toward global warming and is endeavoring to adapt policies to meet its emissions targets. Greenhouse gas emissions reduction remains an ongoing goal in the national environmental policy and, if the technology is available, it will be installed accordingly.

The KÃ¥rstÃ¸ gas-fired combined-cycle plant, the first constructed in Norway, is located in Rogaland, western Norway. Its owner is Naturkraft, a Norwegian power company. Naturkraft is owned jointly and equally by StatoilHydro and Statkraft. The partners supply Naturkraft with fuel gas (KÃ¥rstÃ¸ is also the name of the larger industrial site where natural gas is processed) and then receive the electrical power produced (Figure 1). 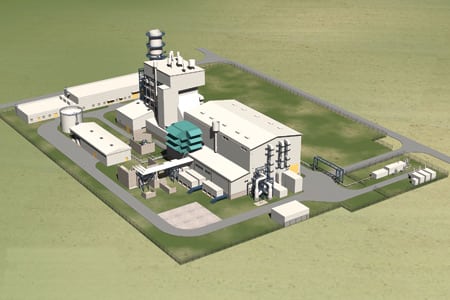 1. Blueprint for success. This architectâ€™s rendering shows the entire KÃ¥rstÃ¸ power plan site. Siemens Energy constructed the plant under the terms of an engineering, procurement, and construction contract. It also provided the SGT5-4000F gas turbine, the steam turbine, and the generator. Courtesy: Siemens 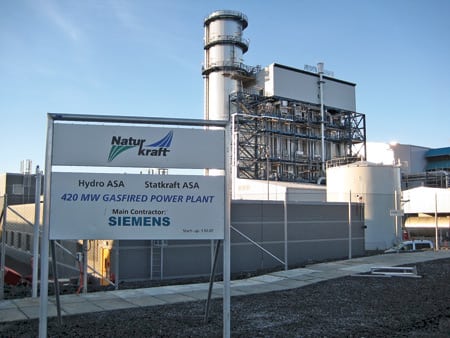 2. Green operations. All emissions-related technologies installed at the KÃ¥rstÃ¸ power plant are rated as the most advanced emissions control technology available. As a result, the plant has achieved NOx values lower than 2 ppm. The plant also meets high environmental requirements for water treatment. Courtesy: Siemens

In 2005, Naturkraft signed the engineering, procurement, and construction (EPC) agreement with Siemens Energy, which agreed to provide its SGT5-4000F gas turbine, the steam turbine, and the generator. In early 2006, Siemens started construction. In late 2006, lift-in of the main components was performed and, within a short time, KÃ¥rstÃ¸â€™s first firing was achieved in the summer of 2007. The plant began commercial operation on October 14, 2007 (Figure 3). 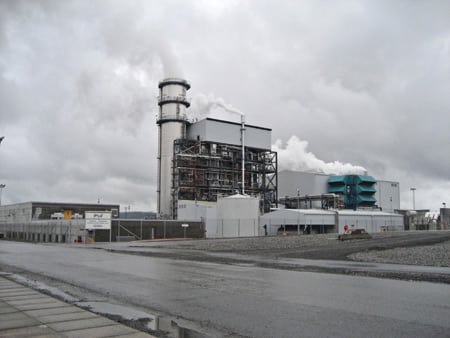 Anatomy of the new plant

Siemens installed the most advanced emissions reduction technologies available for their ability to control standard air pollutants, especially NOx. Siemens also equipped the gas turbines with dry low-NOx-systems, which ensure compliance with European environmental regulations. In addition, Naturkraft decided to include a selective catalytic reduction system as secondary measure. As a result, the plant has achieved NOx values lower than 2 ppm (Figure 4). In Norway, emissions standards are very stringent and, as a result, minimizing measuring errors assumes high significance. Consequently, the devices installed at KÃ¥rstÃ¸ for measurement purposes are truly high-tech: For NOx, the plant uses a chemiluminescent device, and ammonia is measured with a LDS6 laser device. 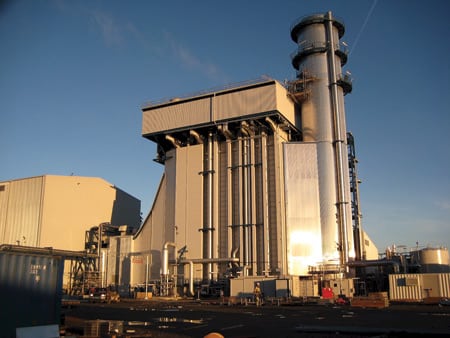 4. Nixing NOx. The KÃ¥rstÃ¸ combined-cycle power plant is one of the most efficient and environmentally friendly gas-fired power plants in the world. It has achieved one of the lowest NOx emissions levels for a fossil-fueled power plant in Europe. Courtesy: Siemens

The plant also meets high environmental requirements for water. For example, in Norway cooling water may not be chlorinated. Freshwater is withdrawn from deeper-than-usual sea levels (260 feet below sea level) to comply with the requirements of the processing technology, which include avoiding algae formation. The cool water also helps to raise the plantâ€™s efficiency a bit higher than would be possible in warm climates.

In addition, the project has an environmental management system that is aligned with the international standard ISO 14001. A corresponding work plan was created to meet the guidelineâ€™s strict separation of waste on the building site.

Key plant data and technical parameters include the following:

To achieve global carbon reduction targets of 50% by 2050, the European Union (EU) requires greenhouse gas emissions to be reduced by 30% by 2020. Reduction targets increase between 2020 and 2050. EU legislation currently under consideration calls for capture-ready design of coal-fired power plants in 2015 and mandatory capture in 2020.

Norway is not currently a member of the EU. However, the Scandinavian country still has a strong relationship with the EU and its member states that enables it to maintain a high level of economic integration and political cooperation with EU nations. Norway is a signatory to the European Economic Area European Free Trade Association (EEA EFTA), which enlarges the EU market to include all nations that have entered into the agreement.

The EUâ€™s â€œProposal for a Directive of the European Parliament and of the Council on the Geological Storage of CO2,â€ made in January 2008, calls for capture-ready designs for all power plants larger than 300 MW. This could have a significant impact on how future European power plants will be planned.

To prepare for possible carbon legislation, Siemens is developing capture-ready concepts that strike a balance between low additional upfront investment and minor changes for later conversion to carbon capture.

â€œCapture-readyâ€ is defined as having the following requirements:

This definition results mainly in space and access requirements for additional equipment and auxiliaries, necessary energy supplies, and provisions for cooling requirements.
Power plant areas that are affected to varying degrees by capture-ready measures are:

Steam turbines must be able to be rebuilt to accommodate a number of future carbon capture plant necessities:

To further reduce the emissions from KÃ¥rstÃ¸, the Norwegian government intends to build a CO2-capture plant in connection with Naturkraft. Until a formal investment decision for building such a plant is made by the Parliament, an ongoing governmental initiative is being conducted to study different possible solutions. At the time this article was written in July, the projection was that Parliament would make the decision some time in September 2009. For the moment, the four qualified vendors are starting their front-end engineering and design studies. In parallel, Naturkraft is studying possible tie-in solutions.

The future addition of a CO2-capture plant will further prove KÃ¥rstÃ¸â€™s leadership in using innovative technology to protect the environment.