China has one of the largest reserves of anthracite coal in the world. Anthracite is a dense, hard, brittle, and homogenous type of coal that has relatively higher heating value (HHV) than lower rank coals. It has the highest fixed carbon (FC) and the lowest volatile matter of any coal type. The low–volatile matter content makes anthracite difficult to ignite and slow burning. The ratio of FC to volatile matter (VM) is known as the fuel ratio and is often used to compare the relative combustion characteristics of different coals. A coal with a high fuel ratio is typically more difficult to burn. The fuel ratio for anthracite coal is typically 10:1, whereas this ratio for typical bituminous or lignite coals is in the range of 1:1 to 2:1.

The B&W Power Generation Group (B&W PGG) determined that FC and VM alone are not good indicators of whether a fuel is difficult to burn. Even reactive (low fuel ratio) coals have proven to be difficult to burn if there is excessive moisture and/or ash. This is because high inorganic content can inhibit carbon utilization by providing a heat sink and interfering with the opportunity for combustible portions of the fuel to come in contact with the oxygen. B&W PGG has developed an empirical ignition factor derived from full-scale experience with difficult coals. This factor relates variations in fuel ratio, moisture content, ash content, and coal heating value to ignition behavior. This factor allows the accurate matching of the proper burner to the fuel. 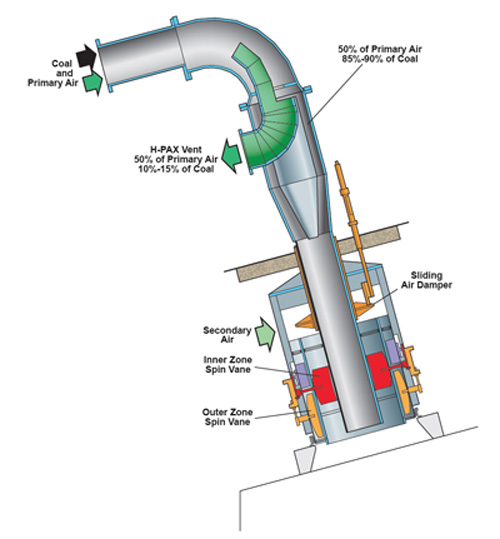 First, the fuel-air temperature in the ignition zone is increased by directing a portion of the low-temperature primary air away from the coal at the burner nozzle and injecting it later in the combustion process. This diverted portion of primary air is referred to as vent air. Extracting the vent air reduces the amount of heat needed to support ignition of the fuel-air mixture, improving the effectiveness of the ignition process. The velocity of the pulverized coal stream through the burner nozzle is determined empirically to optimize the ignition of the fuel while providing long residence time of the fuel in the ignition zone. The pulverizers supply the coal with high particle fineness, which increases the heating rate of the coal particles.

The H-PAX burner is equipped with B&W PGG’s enhanced ignition dual register system, which recirculates gases from the char reaction zone back to the ignition zone of the flame.

Finally, the H-PAX burner develops a fuel-rich zone near the high-temperature secondary air layer that provides more efficient heating of the coal particles. Staging air is injected below (downstream of) the vent air to minimize nitrogen oxides (NOx) formation.

Babcock & Wilcox’s (B&W) research in once-through boilers began at the company’s Bayonne, New Jersey, laboratory in 1916. B&W increased its research work, and in 1951 it established another heat transfer test facility in Alliance, Ohio, capable of operating at 34.5 MPa (5,000 psi).

During the 1960s there was rapid growth in power plant size, with most of the large units using the supercritical steam cycle. During this period, B&W’s once-through boiler design capability grew from 125 MW to more than 1,100 MW. The year 1972 marked the startup of the world’s largest supercritical boiler, the B&W 1,300-MW unit at Tennessee Valley Authority’s Cumberland Fossil Plant. During the next 18 years, B&W supplied and started up eight additional 1,300-MW units, including the AEP Mountaineer unit, which holds the world record of 607 days of continuous operation without an outage.

The U.S. utility market originally used supercritical units for baseload duty only, so constant furnace pressure operation was not a concern. However, today’s market in the U.S. and worldwide favors units capable of full variable pressure furnace operation, which allows the flexibility to operate the units either as baseloaded or with on/off or load cycling.

In addition to the Jinzhushan Unit 3 project, BWBC has four other downshot-type VTUP boilers under contract. China Guodian Corporation Xingyang Units 1 and 2 entered commercial service in 2012, and Guizhou Xingyi Power Development Xingyi Units 1 and 2 are scheduled to start up in 2012. All are 600-MW downshot units with steam conditions of 571C /569C (1,060F/1,056F). In addition to the downshot contracts, the technology is ready to be applied to a wall-fired design project.

Evolution of the Downshot Circulation Design

B&W PGG’s development of the downshot boiler in China started in 1986 with the sale of 2 x 350-MW subcritical natural circulation–type boilers to Huenang International Power Development Corp. for the Shang-an power plant. In 2003, the product was scaled up to 600 MW when BWBC sold four subcritical downshot boilers to Guohua Diandong Power Co. for its Diandong power plant located in Yunnan Province. B&W PGG and BWBC have sold a total of 37 anthracite-fired downshot units (16,800 MW) to customers in Canada, China, and Vietnam.

With the central utility planning for China requiring the use of the more efficient supercritical steam cycle technology for new coal-fired power plants, B&W PGG and BWBC developed an enhanced version of its 600-MW downshot boiler by adapting B&W PGG’s VTUP boiler technology.

B&W PGG has developed several types of furnace designs for once-through fossil fuel boiler applications. Figure 3 provides a comparison of the three basic types of B&W PGG once-through boiler furnaces. B&W PGG has experience with both vertical tube and spiral wound furnace designs. The multi-pass vertical tube design was developed in the late 1950s and has been proven by more than 600 designed and operating worldwide. B&W PGG’s multi-pass design, known as the UP boiler, utilizes multiple flow passes in the furnace with a constant pressure high mass flux furnace design. The multi-pass UP uses variable pressure operation in the superheater to match the variable pressure requirements of the steam turbine over the operating load range. 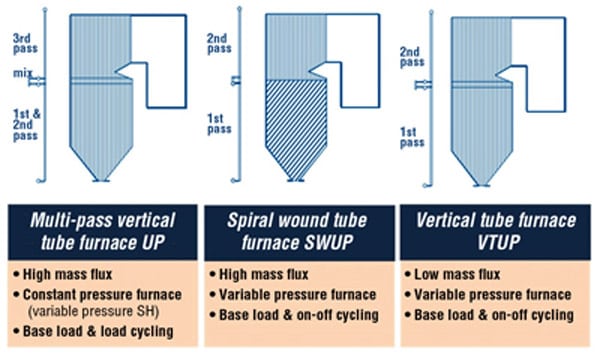 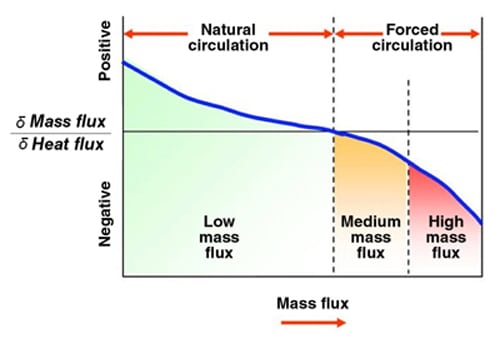 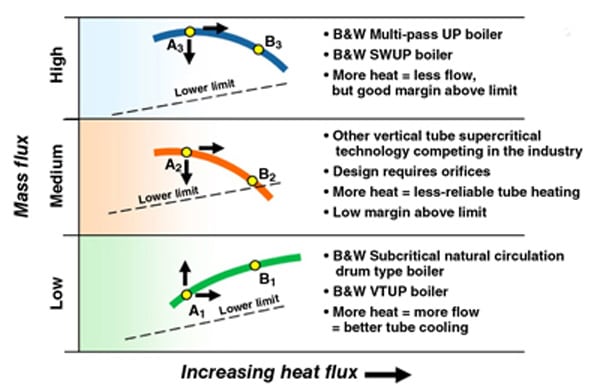 By contrast, the B&W PGG VTUP design has natural circulation characteristics, where the mass flux of the fluid in the tube increases with increasing heat flux to provide an increased cooling effect for tubes that are exposed to heat flux surges. This effect provides a natural self-adjustment characteristic that is more resistant to the inherent variations in combustion within the furnace from unexpected turbulence as well as different burner and pulverizer firing combinations and when changing from one fuel to another. The low mass flux design will also result in more even enthalpy leaving the tubes around the furnace perimeter, and tube metal temperatures will be more balanced than with other vertical tube type variable pressure furnaces. That is why the B&W PGG VTUP furnace design was chosen for Jinzhushan 3. The low mass flux and the vertical tube geometry provided a combination of features that best fit the needs of the supercritical downshot application.

The low mass flux feature provided lower overall furnace pressure drop and natural circulation characteristics across all boiler operating loads. The natural circulation characteristics allow for the fluid flow to distribute itself to the furnace circuits based upon each circuit’s heat absorption. Circuits with more heat absorption draw more flow.

One of the disadvantages of the multi-pass, spiral and medium mass flux designs is a higher furnace pressure drop, which requires greater feed pump power, reducing the net generating efficiency of the supercritical steam cycle. Other drawbacks of the multi-pass vertical tube furnace design are that it is not capable of full variable furnace pressure operation, reducing the cycle efficiency at partial loads. The multiple pass and spiral furnace configurations are also not easily adaptable to the unusual furnace geometry of the downshot boiler. The VTUP furnace design proved to be the most advantageous fit for the Jinzhushan downshot boiler.

Advantages of the B&W PGG VTUP furnace design include:

The Jinzhushan 3 downshot furnace design has an arrangement with 35 mm OD OMLR SA213T12 tubes in the lower furnace and 28 mm OD smooth 15 CrMo tubes in the upper furnace. The fluid leaving the lower furnace tubes is fully mixed before entering the upper furnace tube circuits. The tubes in the burner zone region of the lower furnace are covered by refractory. Because the furnace cross-section is rectangular and the corners are mitered, the heat flux around the furnace perimeter was carefully assessed and applicable adjustments were made in evaluation of the circulation design. Heat flux variations due to potential upset conditions were also evaluated to achieve acceptable metal temperatures at all loads. Computational combustion models of the furnace design were developed to obtain vertical and horizontal heat flux distributions. Figure 6 shows the heat flux distribution in the Jinzhushan 3 furnace for full-load firing conditions with all burners in service. 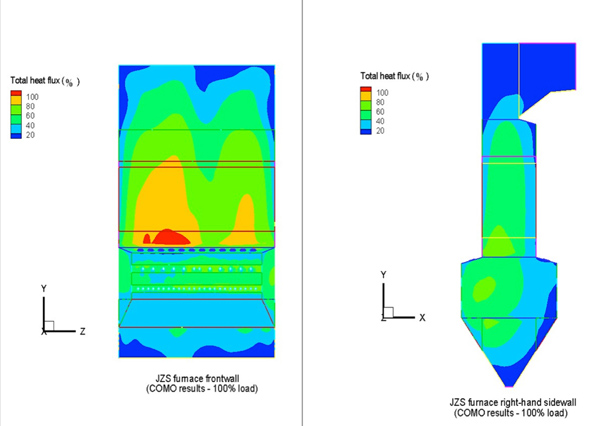 The circulation design was evaluated for loads from 30% to 100% of the maximum rated load for the boiler. Balanced and unbalanced firing schemes were evaluated and used for checking the maximum expected tube metal temperatures for the operating range of loads. Stability evaluations were performed on the unit for the most severe circuits in the lower furnace. Tube stability goals within the panels as well as the panel to panel stability were met. Figure 7 shows typical stability plots for two different front wall circuits in the Jinzhushan furnace at the 40% load case. The stability graphs show that flow variations caused by a heat disturbance to the circuit diminish relatively quickly without the need for additional equalization/stabilization measures such as the use of tube inlet orifices or an equalization/stabilization header. 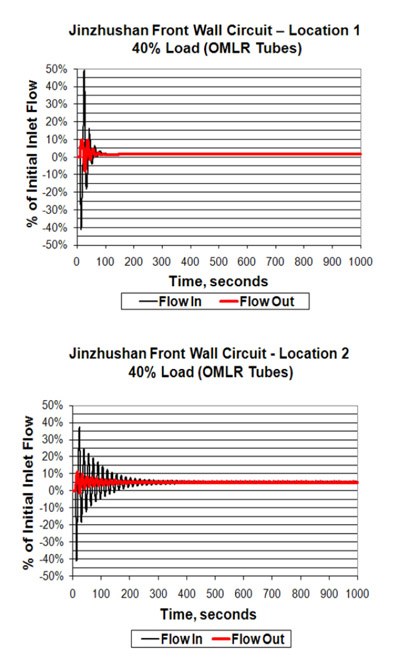