Japan began operating a nuclear power reactor using plutonium-uranium mixed oxide (MOX) as fuel for the first time last October. About 16 MOX-containing fuel assemblies were loaded during a scheduled outage to replace a portion of the 193 fuel assemblies at the No. 3 reactor at Kyushu Electric Power Co.’s Genkai nuclear power plant. The utility eventually plans to triple the number of fuel assemblies at the 1,180-MW reactor in Saga Prefecture to 48. The Ministry of Economy, Trade and Industry conducted its final inspection of the reactor and issued its certification on Dec. 2.

Kyushu’s move marks a major milestone for the country, whose 53 reactors currently provide some 30% of its electricity. While Japan’s long-term nuclear policies call for this capacity to increase to at least 40% by 2017, it relies on the establishment of a closed nuclear fuel cycle with the irradiation of MOX — nuclear fuel made of reprocessed plutonium and uranium — in conventional light water reactors, including pressurized and boiling water types. In Japan, this process is referred to as "pluthermal" — a portmanteau of the words "plutonium" and "thermal."

Nuclear policies call for at least 16 to 18 plutonium-based thermal power generating facilities to be set up by 2015. Plans appear to be on track: Kyushu’s Genkai Plant will be followed by Electric Power Co.’s Ikata plant this January, and the Hamaoka plant run by the Chubu Electric Power Co. is expected to be ready by summer 2010. The challenges the industry will likely face are related to a lack of wide public support for the fuel source, the Federation of Electric Power Companies (FEPC) warns. "Nevertheless, as mentioned at the outset, Japan, scarce in energy resources, is continuing its policy of establishing a nuclear fuel cycle," it says on its website. "MOX utilization, therefore, remains a crucial part of completing the fuel cycle."

Japan’s planned reliance on MOX follows decades of shipping used fuel to plants in France and the UK for reprocessing. Now the country is looking to put its domestic nuclear fuel cycle on a "firmer footing," says FEPC, which points out that the 130 metric tons/year Iyasakatai reprocessing plant in Rokkasho-mura (in northern Aomori Prefecture) is due to start commercial operation. Japan Nuclear Fuel Ltd., which owns that plant, also has plans to build and begin operation of a MOX reprocessing plant by 2012.

MOX will be such an important component of the country’s nuclear future that regulators last year permitted Electric Power Development Co. Ltd. to construct Ohma Nuclear Power Plant — the world’s first full-MOX nuclear power plant. When operational, as is expected in November 2014, that 1,383-MW advanced boiling water reactor in Aomori Prefecture will use MOX fuel in the entire core.

According to the World Nuclear Association, MOX fuel use around the world is expected to increase. After 2010, MOX is expected to supply about 5% of global reactor fuel requirements. France and Russia currently use the most MOX in fast neuron reactors, and Russia is leading fast reactor development, pursuing long-term plans to build a new generation of fast reactors fueled by MOX. That country could start up the world’s largest fast reactor — the 800-MW BN-800 by 2010, the organization said.

Meanwhile, only two plants globally currently produce commercial MOX fuel quantities: AREVA’s 195-metric tons/year Melox plant and the 40-metric tons/year Sellafield MOX (Figure 2) plant in the UK. Construction of a MOX facility at the Savannah River site in the U.S. is also under way by a Shaw Group/AREVA consortium. Expected to begin operations in 2016, that plant is designed to turn 3.5 metric tons/year of weapons-grade plutonium into MOX fuel assemblies. 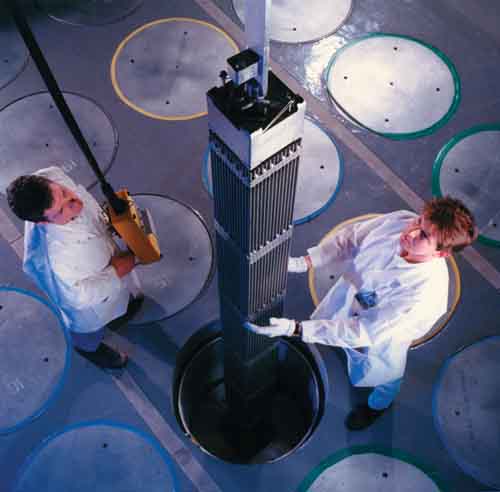 2. A MOX box. Workers at the Sellafield MOX plant in the UK load a mixed-oxide (MOX) fuel assembly. According to the World Nuclear Association, MOX is expected to supply about 5% of global reactor fuel requirements by 2010. Japan recently began using MOX fuel for the first time—at the Kyushu Electric Power Co.’s Genkai nuclear power plant. Several nuclear companies in that country are expected to follow suit. Courtesy: Nuclear Decommissioning Authority