In large part because of swelling supplies of natural gas, and failing crude oil prices that have helped depress gas prices around the world, as well as because of its environmental advantage over fuel oil, liquefied natural gas (LNG) is garnering growing interest as a generation fuel.

While huge, multi-billion-dollar LNG import and export terminals have grabbed much of the attention, one option a number of companies are looking at is the use of small-scale LNG to meet small generation needs, such as island grids and distributed generation (DG). There is a substantial amount of small-scale LNG infrastructure in existence around the world, and a robust market for small-scale liquefaction, with plants available at capacities down to a few thousand gallons per day.

Whether the LNG comes from a terminal or is liquefied from existing supplies in a smaller plant, LNG offers the advantage of being able to supply remote gas-fired generation that is too far from gas pipelines to justify a connection.

So far, however, small scale LNG–based power generation remains a more possibility than a reality, but it’s one some people are working to make happen.

Several manufacturers, such as Wärtsilä, have floated designs for LNG-powered plants that would incorporate a small import terminal. That added expense means the economics are dependent on gas prices and the ability to supply LNG or vaporized gas to other customers. Wärtsilä is also promoting a barge-based regasification concept that could be combined with a barge-mounted power plant (the company has delivered a number of such plants in the past).

How the LNG gets from the import terminal or liquefaction plant is an element in the feasibility of such power plants, but there advances in transportation infrastructure offer means of greater efficiency and lower costs.

LNG has traditionally been shipped in tanker trucks of around 10,000-gallon capacity, but these come with certain challenges, mainly in that the LNG must be offloaded and stored on-site in an existing storage facility. A new option that has emerged in recent years is the containerized LNG tank, which is shipped and handled the same as a standard shipping container (Figure 1). Another advantage is that such tanks can be used as on-site storage—they can be unloaded and connected directly to the end-user’s facility without requiring the LNG to be pumped out as with a tanker truck. Korean firm KOGAS has been looking at supplying island generators with LNG through this method. 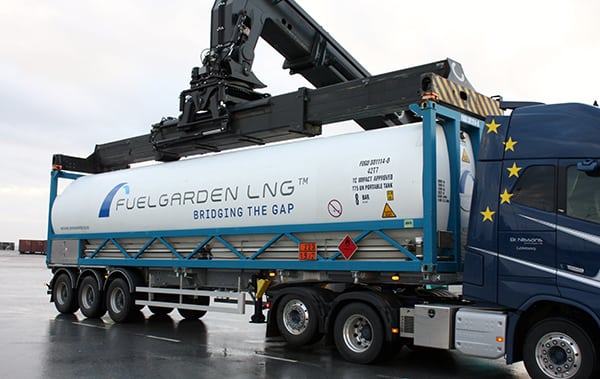 Other generators, particularly in the U.S. Northeast, which has suffered gas shortages in recent winters, are looking at LNG as a means of firming fuel supplies when pipeline capacity is constrained.

Speaking at the EUEC 2016 conference in San Diego in February, Joan Fontaine, vice president with Sanborn, Head & Associates, described a 45-MW gas-fired DG project that her firm is developing for a client. It would have a 100,000-gallon LNG storage facility on site, roughly enough for 20 hours at 100% capacity. The storage facility would be refilled by standard 10,000-gallon tanker trucks.

“As pipeline pressure is decreasing in the event of a curtailment, the gas from the LNG facility will overcome that pressure,” she said.

Fontaine stressed that such projects obviously carry with them challenges that don’t exist with standalone power plants, but none of them are game-changers. Whether the generation sector will take up the opportunity remains to be seen.