In recent years, the potential popularity of electric vehicles (EVs) and plug-in hybrid-electric vehicles has had utility executives up nights worrying about spikes in demand at the end of every workday as EV owners all began charging their cars upon returning home.

Now, a new study from Austin, Texas–based Pecan Street Research (PSR) suggests that assumptions about EV charging habits may be seriously flawed. Previous researchers had modeled all or nearly all EV charging as beginning in the early evening and ending a few hours later as the vehicles were fully charged. This possibility has created significant concern for utilities, since it would coincide with peak late-afternoon demand, especially during the summer.

The PSR study tracked the charging habits of 30 EV-owning homes (comprising 31 EVs) in Austin, half of whom are also participating in a time-of-use pricing trial. The EVs included Chevy Volts (21), Nissan Leafs (8), and a Tesla Model S.

The findings were eye opening: Far from being concentrated during peak demand periods, 78% of EV charging took place outside the 3 p.m.-to-7 p.m. window. For participants in the pricing trial, the deviation from expected models was even greater. Only 12% of their charging took place during peak periods, which suggests that EV owners are highly receptive to pricing signals that incentivize off-peak charging. The peak charging time for both groups was around 10 p.m. to 12 p.m. 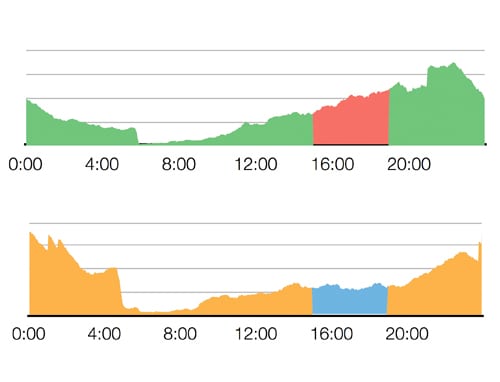 1. No peaks. Contrary to previous models, EV charging was distributed across the day, with most charging coming late at night. For customers participating in a time-of-use pricing trial (bottom), only a small portion of EV charging took place during peak afternoon demand. (The top graph represents customers not in the trial.) Source: Pecan Street Research Institute.

Another interesting finding emerged: Most charging was of shorter duration than previously modeled, as EV owners typically began charging their vehicles well before they were completely drained. The average charge duration was around 114 minutes, compared to the estimated 200 minutes necessary for a full charge for a Chevy Volt. The average monthly use for Volt and Leaf owners was between 181 kWh and 192 kWh (the Model S, with its much larger battery, had 354 kWh average use).

Though admittedly small, other evidence from the study suggests the findings may be representative of the EV market, as usage patterns of the EV owners were consistent with larger studies of EV use. The findings suggest that existing grids may be able to accommodate substantially more EV demand that previously thought.