Germany’s E.ON laid the foundation stone in late March for a 433-MW combined-cycle power plant in Gönyü (Figure 6), a power-stricken region in northwestern Hungary. The power plant, expected to begin operation in 2011, will operate with a net efficiency of more than 58% — making it one of the most efficient power plants in the world. 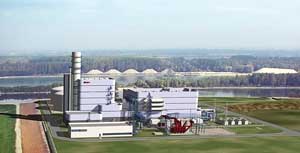 6. Hungary’s newest gas plant. E.ON began construction of a 433-MW combined-cycle power plant in GönyÅ±, in northwestern Hungary. The plant is expected to begin producing power for the power-deficient region in 2011, operating with a net efficiency of more than 58%. Courtesy: E.ON

The high efficiency will be achieved using a "state-of-the-art combined cycle process," comprising one gas turbine and a steam turbine with a heat-recovery steam generator in a single-shaft design with SSS-Clutch, E.ON spokesperson Dr. Gyöngyi Kiss told POWER. "The high efficiency is based on that well-established process and the fact that we are able to use the water of the [River] Danube for cooling purposes on an open circuit."

E.ON said that power station output could be doubled to about 800 MW because the plant is expected to play a critical role in the country’s energy security. The nation of almost 10 million is looking at a capacity deficit of nearly 3,500 MW by the year 2020 caused by its surging economic growth and retirements of old power plants. As a result, the Hungarian government is encouraging new builds at a quick rate. Many of the new plants will be gas-fired, though coal and renewable plants will also be built.

The nation — like many countries in Eastern Europe — was hard hit during the gas crisis earlier this year, when Russia’s Gazprom turned off supply following a pricing spat with Ukraine. Kiss said, however, that gas supply disruption was not a major a concern for E.ON. "In case of disruption, according to the Hungarian Electricity Act, the Gönyü Power Plant will have fuel oil reserves for 16 days." The plant can burn both gas and diesel oil.