High-temperature superconducting cables deliver up to 10 times as much power as conventional electric power transmission cables. They are poised to help to reduce grid congestion as well as installation and operating costs.

All over the world, electric utilities are dealing with the challenge of trying to move more electricity through urban grids to meet the growing power demands of 21st-century customers. In addition, they must protect end users from increasingly larger power surges, known as fault currents.

A technological breakthrough in cable technology promises to assist utilities in overcoming both of these problems. The new cable is manufactured using hair-thin high-temperature superconductor (HTS) wires that conduct 150 times the electricity of similar-sized copper wires (Figure 1). When placed in a cable, these superconductor wires act as almost perfect conductors of electricity as long as a few conditions are met, the most notable one being that the temperature of the cable must be maintained below a certain critical temperature. This requires the cable system to be continuously cooled with liquid nitrogen, which is inexpensive and environmentally safe. This also eliminates the oil used in many conventional high-power cables in cities across the U.S. 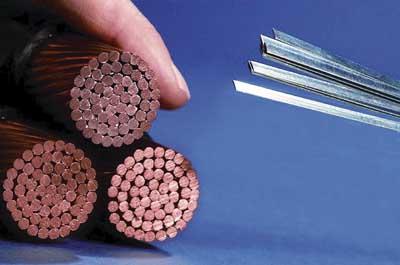 Overview of the New Technology

In November, POWER interviewed Jack McCall, director of business development of transmission and distributions systems for American Superconductor, which is the company that developed [correction: co-developed] the HTS electric power cables

"An understanding of the basics of HTS cables sets a good point of reference in discussing their application," he said. "There are four primary characteristics of HTS cables that differentiate them from traditional copper cables: higher power transfer capability, very low impedance, simplified placement considerations, and optional fault current limiting capability."

McCall explained that the power density advantage enables an HTS cable of any voltage to conduct up to 150 [correction: 10 times for the cable] times more power than traditional copper-based cables. Conversely, it is possible to carry a given amount of power at a much lower voltage level than is typically used. For example, a single 15-kV class HTS cable can carry 100 MVA, a level usually associated with 69-kV copper cables.

The very low impedance of HTS cables results in much lower power losses compared with equivalent cables, he pointed out. When placed in a network application, the cable’s lower impedance attracts current flow from parallel circuits, reducing the power losses in those lines as well, although the refrigeration system required by the cable system does offset some of the efficiency gains.

According to McCall, two characteristics of HTS cables combine to produce simplified siting requirements. The first of these is that HTS cables generate little to no magnetic field. This both dramatically reduces the required right of way and eliminates the need to derate the cables when they are placed near other cables or underground infrastructure. The environmental and public relations benefits due to the absence of magnetic fields are also apparent (there is no electric field either, but that is true of all cables). Secondly, as the cables are in a self-contained thermal envelope due to the refrigeration system, there is no need to consider derating of the cables due to cable burial method, depth, or soil type. Therefore, HTS cables are ideal for placement in constrained right-of-way locations, especially when large amounts of power transfer are desired.

McCall pointed out that another important innovation in the [American Superconductor] HTS cable’s design is its built-in fault current limiting capabilities. The cable will act as a very low impedance, high-ampacity conductor under normal operating condition, and then become highly resistive during faults, limiting high-magnitude fault currents.

One of the most unusual features of the HTS cables is that their cores have to be maintained at cryogenic temperatures. As a result of this requirement, the HTS cable’s design had to be specially adapted to include a cryogenic refrigeration system.

HTS cables consist of concentric layers of HTS wire and a dielectric material providing electrical insulation compatible with cryogenic temperatures, he explained. This is referred to as a coaxial "cold-dielectric" design. The cable system was designed, manufactured, and installed by Nexans, a worldwide leader in the cable industry. Figure 2 illustrates Nexans’ HTS cable design used at Long Island Power Authority (LIPA). 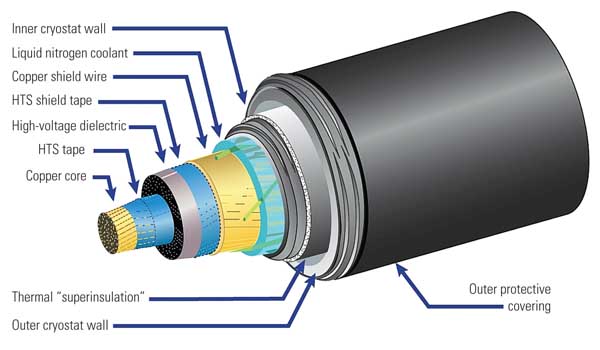 2. The big chill. Flowing between the layers of HTS wires in the cable, the liquid nitrogen coolant cools them to about –200C. The cables use a liquid nitrogen refrigeration system provided by Air Liquide. Courtesy: Nexans

From the Lab to the Real World

In April 2008, LIPA installed and energized the world’s first HTS power transmission cable system in a commercial power grid, he added. The Nexans 138-kV cable system installed in LIPA’s grid runs nearly a half mile in length and is the longest and most powerful HTS cable system to date (Figure 3). 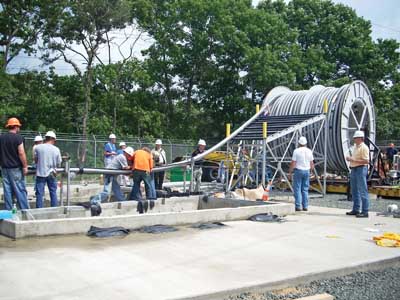 At 574 MW, the LIPA cable system is able to serve 300,000 residents and businesses in New York’s Nassau and Suffolk Counties. The 138-kV system, which consists of three individual HTS power cable phases running in parallel, was commissioned in April 2008 and is operating successfully in LIPA’s Holbrook transmission right of way (Figure 4). 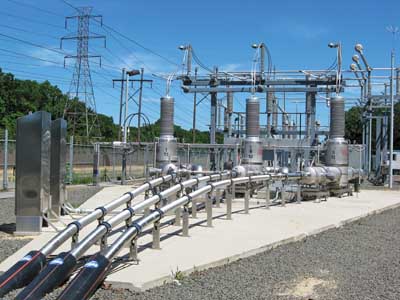 4. Power pioneer. The world’s first HTS power transmission cable system energizes the Long Island Power Authority’s Holbrook transmission right of way. This system, which consists of three cables running in parallel in a 4-foot-wide underground right of way, is capable of carrying 574 MW. The three cables shown entering the ground can carry as much power as all of the overhead lines on the far left. Courtesy: American Superconductor Corp.

McCall noted that HTS cable requires certain operational considerations that aren’t necessary with conventional cables. A utility will need to provide regular substation access to the cryo-cooling system supplier for periodic maintenance of the system. If fault current limiting HTS cable is used, the resulting alternate low-impedance/high-impedance characteristics of the cable may require more careful attention when setting up protective relay schemes. Conversely, an HTS cable requires no derating based on load levels, placement, or ambient temperature.

He emphasized that HTS cables can be used anywhere in the transmission grid. HTS cable systems consist of the cables, their terminations, and the cryo-cooling (refrigeration) system and its associated controls. In general, the cables should terminate in substations, as the cable terminations are larger than conventional terminations. The substation environment also needs to provide space for the required cryo-cooling equipment.

"The production cost of HTS wire is presently more expensive than that of copper, primarily due to the relatively small quantity of HTS wire currently being produced," McCall said. "The industry projects the latest HTS wire technology, referred to as 2G, will be no more expensive, and should ultimately be less expensive, than copper on a cost per kilo-amp-meter basis (price/performance ratio) once it enters large-scale production."

The cost of HTS cable systems must be considered in light of the overall solution they provide, he pointed out. For example, if a single cable can replace a bank of eight conventional cables, avoid extensive street work, and eliminate the need to upgrade dozens of circuit breakers, then that total benefit must be considered. As more HTS cables are installed and manufacturing capacity is scaled up, the cost of HTS wire, cooling systems, and so on will also drop, increasing the system’s economic value.

"Initial applications for HTS cables will be very high-value ones," he said. "HTS cables will initially be most cost competitive in urban, high-power, limited right-of-way applications. As manufacturing costs decrease, their financial competitiveness in a much wider variety of applications will grow as well, including the short- to medium-distance transmission applications where higher-voltage underground cables are currently deployed."

Looking Down the Road

The U.S. power grid will undergo a significant period of investment and redesign over the next few decades. The need for extensive additions to the transmission grid to connect renewables to the power grid is well established. Whether from simple increases in population, or from industry-changing events such as large-scale adoption of plug-in hybrid electric vehicles, significant load growth will continue within high-population-density urban areas, requiring extensive additions to the load side of the network as well.

"The greatest challenge to the widespread use of HTS cable systems is actually education and industry awareness," McCall said. "Most utility personnel who are involved in the day-to-day planning and project engineering process are not aware of HTS cable’s unique characteristics or its availability. There is likely at least one project or problem at most utilities where an HTS cable could be considered a viable, if not preferred, solution. Widespread application will not occur until the time that HTS cables become an active part of the set of technologies that a utility considers during its day-to-day problem-solving and planning activities."

HTS cables will likely first be adopted to strengthen urban networks, increasing reliability and enhancing utilities’ ability to supply increased load without building new substations, he predicted. This first use of the new technology may be followed by applications where HTS cables are used to inject large amounts of power from nearby regional transmission grids into load centers. Eliminating grid congestion or line siting issues on these regional networks would be a logical next step. Further out, the Electric Power Research Institute is already studying the development and use of very long inter-regional HTS high-voltage direct current cables capable of transmitting 10 GW over distances of up to 600 miles.

"The industry will continue to make improvements in wire manufacture methods, as well as in the amount of current an individual HTS wire can carry," he said. "Work also continues in developing more cost-effective cryo-cooling systems that are optimized for HTS cable applications. These innovations and developments will continue to roll out as the demand for HTS cables increases and the industry grows."