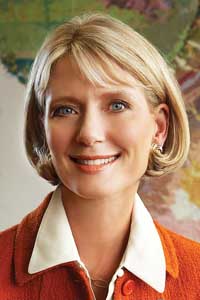 In the 1980s, Houston wildcatter George Mitchell drilled the first well into the Barnett Shale formation that stretches through north and central Texas. He tapped into what would turn out to be one of the most prolific and valuable onshore natural gas reserves in the United States.

It would take nearly two decades and millions of dollars to develop the horizontal, hydraulic technology necessary to bring the Barnett’s natural gas to the surface. Today, natural gas wells in the Barnett Shale are located within the city limits of Fort Worth and surrounding communities, and are a stone’s throw from suburban homes and schools.

The implications of this discovery and the technology that makes extraction of natural gas from the Barnett Shale possible are far-reaching for Texas, our electricity market, and our nation.

Because natural gas is often coproduced with crude oil, its pricing is often linked with oil production. That makes it vulnerable to the same geopolitical and economic pressures that affect crude oil, albeit on a less dramatic scale.

Add to the geopolitical reality of fluctuating, often volatile crude oil and natural gas prices, the fact that the natural gas industry is also affected by weather. The U.S. Department of Energy reported that 7% of natural gas output and 26 major natural gas pipelines in the Gulf of Mexico remained down or at reduced production levels a full two weeks after Hurricane Ike rolled ashore near Galveston in mid-September.

In late September, the price of natural gas was about $7 per mmBtu, up from $3 per mmBtu in 2000. The good news is that supply disruptions along the Texas Gulf Coast are temporary, and increased production from unconventional fields like the Barnett Shale area is helping us meet our current and future natural gas demands domestically.

More than 9,000 wells are producing today in the Barnett Shale. That’s more than 10 times the total in 2000. Less than eight years ago, the Texas Railroad Commission, the primary Texas agency that regulates the oil and gas industry, issued 273 permits for the Barnett Shale; this past year we issued 3,140 permits. The Barnett Shale alone produced 1.2 trillion cubic feet of natural gas last year.

The price of electricity generated by natural gas in the wholesale market within the Electric Reliability Council of Texas closely correlates with natural gas prices. Those Texans who shopped for a competitive retail provider during price dips in late 2005 and early 2006, for example, found lower prices.

Deregulation of the Texas residential electric market has provided consumers with the power of choice and competition. We would be wise to turn our attention now to addressing our dangerous dependence on imports from unstable countries.

More gas on the way

For nearly a century, Texas’ regulatory and tax structure has worked the way it is supposed to. It didn’t lock up oil and gas fields that seemed to be unprofitable. Instead, because of state policies that have allowed local governments, schools, and property owners to benefit through property taxes and royalties, energy companies have been able to lease mineral rights and to prepare to tap into the fields once they became profitable.

The Texas approach to encouraging the development of unconventional fields has generated a benefit to America. Techniques developed for the Barnett Shale are helping to tap into new reserves elsewhere around the country.

One such new field, the Haynesville Shale formation, sits under Shreveport, La., and stretches into Arkansas and Texas. Right now, energy companies are poised to tap into what may be the largest natural gas find in the continental U.S. As the drilling starts up, they will be using techniques pioneered by Mr. Mitchell and perfected in the Barnett Shale.

In Texas, we have an energy policy that works because it relies on the ingenuity of the people to provide safe, reliable energy. What we need is for Washington to take a similar approach — a "Made in America" plan to help ensure our country’s energy security.

–Elizabeth Ames Jones is a member of the Texas Railroad Commission.