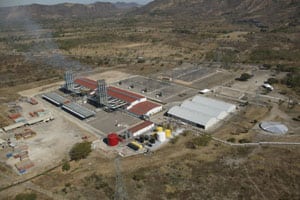 "Lufussa’s $190 million investment in the Pavana III project is the largest private investment in the history of Honduras," President Maduro said in his speech at the inauguration ceremony. He also reminded the audience that the project was completed "an impressive 12 months ahead of schedule."

Lufussa awarded the engineering, procurement, and construction (EPC) contract for Pavana III to Wärtsilä in August 2003. The plant entered commercial operation in two phases: the first (133 MW) went on-line last August, and the second brought the plant to its full capacity of 267 MW this past November.

The Pavana III plant is powered by sixteen 18-cylinder Wärtsilä V46 engines firing heavy fuel oil. The engines are in two separate halls on either side of the control room. This layout, chosen for safety reasons, allows the operator to see all of the engines while at his post.

Also included in the Lufussa project were: construction of a new, on-site substation and a 65-mile-long, 230-kV transmission line; the addition of storage tanks at the company’s fuel depot in Puerto El Henecan on the Caribbean coast; and the building of a 7-mile pipeline from the depot to Pavana. The transmission line from Pavana III delivers power to the Amarateca substation on the outskirts of Tegucigalpa, where it is urgently needed.

Pavana III is one of the first Wärtsilä plants to be equipped with the company’s condition-based maintenance (CBM) system, which connects the plant via the Internet to Wärtsilä’s CBM center in Vaasa, Finland. After analyzing the engines’ operating and condition data, Wärtsilä provides feedback to Lufussa that helps the IPP reduce its O&M costs.

Pavana III complies with the latest World Bank guidelines for emissions of NOx, SO2, and particulate matter (PM). It also does as little harm as possible to the local environment. For example, because Pavana is in an arid region, the engines are air-cooled.

Honduras has an installed generating capacity of 840 MW—404 MW at thermal plants and 436 MW at hydro stations. Now that the Pavana III power plant has come on-line, Wärtsilä plants account for 41% of the country’s total capacity and an even higher share of its electricity production.

Power projects totaling 2,300 MW of capacity have been installed in Central America since 1990, mostly by IPPs. Almost 1,500 MW (64%) of them are powered by reciprocating engines burning low-cost heavy fuel oil. Reciprocating engines continue to be the generation technology of choice in the region because they are efficient and economical and can be deployed in 12 months or less.