Hitachi announced on Tuesday that it had acquired Horizon Nuclear Power in a deal expected to be completed by the end of November. In another example of the global nature of the nuclear business, the Japanese firm purchased Horizon, which was developed by the UK to build new nuclear plants, from German companies RWE and E.ON.

Bloomberg Businessweek reported that the deal is worth $1.1 billion. As soon as it is complete, Hitachi plans to work on achieving license acceptance for its Advanced Boiling Water Reactor (ABWR) technology under the Generic Design Assessment process, governed by the Office for Nuclear Regulation. The Generation III+ ABWR has already been licensed in other countries and four are in operation in Japan.

Hitachi announced that two other British companies, Babcock International and Rolls-Royce, have signed memoranda of understanding to join Hitachi in the plan to build two to three new nuclear plants in the UK. Those plants are expected to be of about 1,300 MW capacity at Horizon sites at Wylfa, Anglesey and Oldbury, Gloucestershire. The first unit is expected to be operational in the first half of the 2020s, Hitachi said.

As the UK looks to new nuclear units as a way to meet its low-carbon generation goals, Germany is shuttering its nuclear reactors, which made the sell-off of German-owned nuclear projects an expected move. E.ON and RWE announced earlier this year that they would not proceed with developing new reactors in the UK. Among the reasons they gave for their decision at that time was that the global economic crisis had tamped down capital for major projects.

Tatsuro Ishizuka, vice president and chief executive officer of Hitachi Power Systems Co., was quoted by Bloomberg Businessweek as saying at a news conference in London on Tuesday: “Today’s investment furthers our investment links in the U.K. with the start of what is likely to be approximately 20 billion-pounds investment program in the U.K.’s energy infrastructure.”

The Wall Street Journal reported that although Hitachi’s nuclear business currently accounts for less than 2% of its revenue, “the Japanese industrial-electronics giant aims to more than double revenue from its nuclear-power business within 10 years.”

The UK gets nearly a quarter of its power from nuclear generation (see map), and overall, it plans to replace nearly a fifth of the country’s total capacity over the next decade. 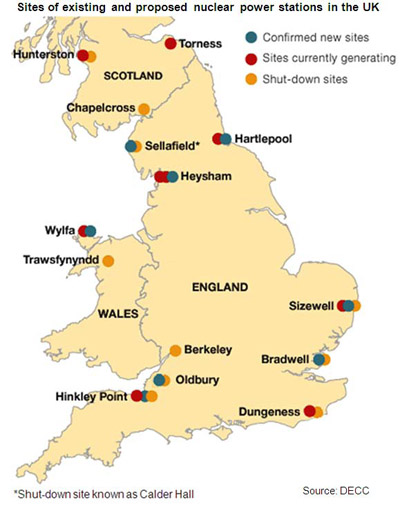 Horizon Nuclear Power was established in 2009 with the goal of developing “up to 6,600 MW of new nuclear power station capacity to help meet the UK’s need for stable and sustainable low carbon energy.”