Researchers from the Idaho National Laboratory (INL) say they have developed a new type of nuclear fuel for use in next-generation high-temperature gas reactors that produces less waste — a major step forward for the Next Generation Nuclear Plant (NGNP).

The NGNP project team, under the auspices of the U.S. Department of Energy, is developing a high-temperature gas-cooled reactor (HTGR) to produce the heat and hydrogen that many industrial facilities use in daily operations. The heat generated by a HTGR, for example, can be used to run more efficient turbines for power production, while residual steam from that process could be used to manufacture plastic components from raw materials or generate ammonia for fertilizer.

INL has been working with Babcock and Wilcox Inc., General Atomics, and Oak Ridge National Laboratory (ORNL) to establish standards and procedures for the manufacture of commercial-scale HTGR fuel. The team has been working to achieve "excellent fuel irradiation performance," which they say must be demonstrated before HTGRs can be licensed and colocated with complementary industrial facilities.

According to INL researchers, it was a great achievement when the advanced nuclear fuel recently set a particle fuel record by consuming about 19% of its low-enriched uranium — more than double the previous record set by German scientists in the 1980s, and more than three times that achieved by current commercial light water reactor fuel (Figure 5). Such high "burnup" levels — a measurement of the percentage of uranium fuel that has undergone fission reactions — can reduce the amount of unused fuel coming out of next-generation reactors, they said. 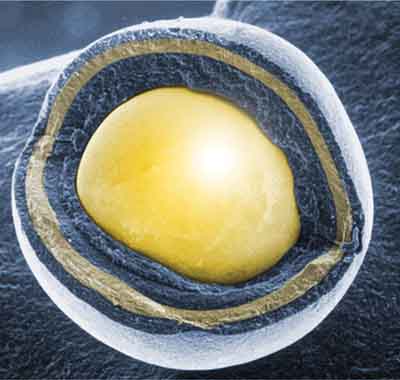 5. A speck on the horizon. Researchers at the Idaho National Laboratory announced last November that low-enriched uranium fuel developed for use in next-generation high-temperature gas-cooled reactors showed “burnup” levels of 19%. That is more than double the previous record set by German scientists in the 1980s and more than three times that achieved by current commercial light water reactor fuel. As the artist’s rendering shows here, each fuel particle contains a kernel of enriched uranium surrounded by carbon and carbide layers that act as containment boundaries for the radioactive material. The tiny kernels can range from 350 to 500 microns, and total particle diameters can range from 780 to 920 microns. Source: Idaho National Laboratory

Added to that, none of the new fuel particles has experienced material failure since entering, in December 2006, the extreme neutron irradiation test environment of the Advanced Test Reactor (ATR).

The test was conducted as part of the Advanced Gas Reactor (AGR) Fuel Program. That program was initiated in 2002 mainly to qualify coated nuclear fuel particles for high-temperature gas reactors such as the NGNP. "AGR-1" is the first of eight similar experiments that are seeking to confirm designs, fabrication processes, and performance characteristics for advanced reactor fuel. It used INL’s unique ATR in a nearly three-year experiment to subject more than 300,000 nuclear fuel particles to an intense neutron field and temperatures around 1,250C.

The 18-foot-long AGR-1 experiment was inserted in INL’s ATR core, which lets researchers separately monitor and control each of six capsules containing the particle fuel specimens. Inside the ATR core, the fuel samples were subjected to neutron irradiation many times higher than what they would experience inside a high-temperature gas reactor or a current light water reactor. These conditions reduced the amount of time researchers needed to get data about how irradiation affected the performance of fuel and materials.

Post-irradiation examination at INL and ORNL facilities will allow scientists to examine the samples up close for degradation patterns and other characteristics. Controlled higher temperature testing in furnaces is planned to determine the safety performance of the fuel under postulated accident conditions. These activities will last another two years.