It has been exactly five years since Ontario opened up its wholesale and retail electricity markets to competition. That long, hot summer saw many power projects cancelled—the victims of uncertainties about profitability, despite rising provincial load. The results of the pullback were predictable: less reliability of supply and less-stable power costs. Regulators responded just as predictably: by quickly freezing rates for about half of Ontario’s electricity consumers.

Five years later, little new capacity has been installed in the province, which remains dominated by publicly owned Ontario Power Generation. As a result, only 25% of Ontario’s power consumers are reaping the putative cost benefits of competition. Making matters worse, demand growth has continued to outstrip supply, shrinking reserve margins. Over the past two years, Ontario’s Independent Electrical System Operator (IESO) has asked citizens 17 times to curb their electricity consumption. The most recent appeal was issued on August 2, as this article was being written.

According to the IESO, “By 2014, close to 13,000 MW of Ontario’s electricity requirements will need to be met with new supply or demand-side resources.” The good news on the supply side is that power projects totaling 7,000 MW of capacity (most of them gas-fired combined-cycle plants) are projected to enter service by 2011. The bad news is the provincial government’s stated goal to wean Ontario off of coal completely by 2014. If that plan is implemented, many of Ontario’s 6,500 MW of coal-fired plants will be shut down in phases, making maintenance of system reliability problematic.

The Greater Toronto Airports Authority (GTAA) made power reliability and security a priority after the widespread northeast U.S. blackout of August 2003, which also affected parts of Ontario. GTAA had first considered building its own cogeneration plant back in 1998, but the project was deemed to lack a raison d’etre because Ontario’s regulated markets were keeping power prices low.

After deregulation in the summer of 2002, and especially after the blackout a year later, GTAA wasted no time reviving its plan to build a cogen plant. Executives envisioned the benefits of such a plant going beyond making the airport self-sufficient in energy. Any excess production could be sold on the open wholesale market, increasing the supply on the provincial grid and helping the IESO cope with rising demand. The twin rationales made economic sense, so this time the cogen project went forward and was completed. Named the GTAA Cogeneration Complex (Figure 1), it was the first of the aforementioned wave of gas-powered power projects to come on-line following Ontario’s adoption of its “off-coal transition plan.” 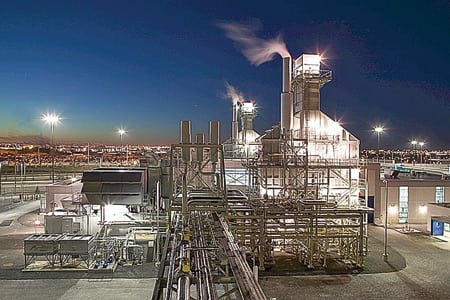 In March 2004, a design, build, operate, and maintain contract for the facility was awarded to SNC-Lavalin Engineers & Constructors Inc. GTAA’s unique approach to the project was to hire a firm capable of doing more than just designing and building it. The contract called for an SNC-Lavalin subsidiary—SNC-Lavalin ProFac (www.snclavalinprofac.com)—to operate and maintain the cogeneration complex after construction. Now an established leader in operations and maintenance, SNC-Lavalin ProFac was founded in 1993 to offer facilities management services to companies in a wide range of industries.

Construction of the facility started in July 2004, and by February 2006 its 117-MW gas-fired combined-cycle was putting electrons on the Ontario grid. Steam from the cogen plant feeds the adjacent Central Utilities Plant (CUP) built to produce heated and chilled water. (More on it later.) As a result, Toronto Pearson International Airport now has the ability to get all of its electricity and its energy for heating and cooling from this off-site source. Surplus electricity is sold into the Ontario electricity market and routed through the local distribution system of Enersource Hydro Mississauga. The airport’s peak electrical demand is currently about 38 MW, but it is expected to grow to nearly 60 MW by 2015.

“Our first responsibility as managers and operators of the airport is to ensure the safety of our tenants and passengers,” said John Kaldeway, president and CEO of GTAA at the time of the plant’s opening. “[Being] able to guarantee a stable supply of power to Toronto Pearson was the driving force behind our decision to build the cogeneration plant.” 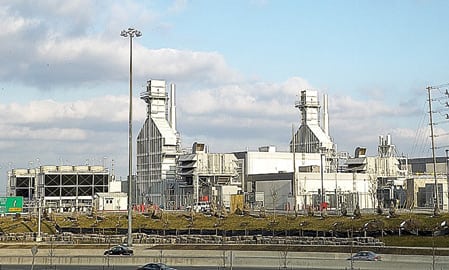 The CUP is outfitted with five 1,500-ton/hr electrically powered water chillers and two 2,000-ton/hr steam turbineï¿½driven centrifugal chillers. If the steam supply from the cogen plant is curtailed, the CUP can make its own in four 65,760-lb/hr package boilers normally fueled by natural gas, with number two fuel oil as backup. The cogeneration complex also has a “black start” diesel generator that can be activated upon a total loss of power.

IST’s OTSGs (Figure 3) give the cogen plant several operating options not available to more conventional combined-cycle facilities. Naturally, they can send surplus steam over to the CUP, which can use it to produce hot water to heat the airport’s terminals (two miles away) in the winter, or to help drive the centrifugal chillers in the summer. 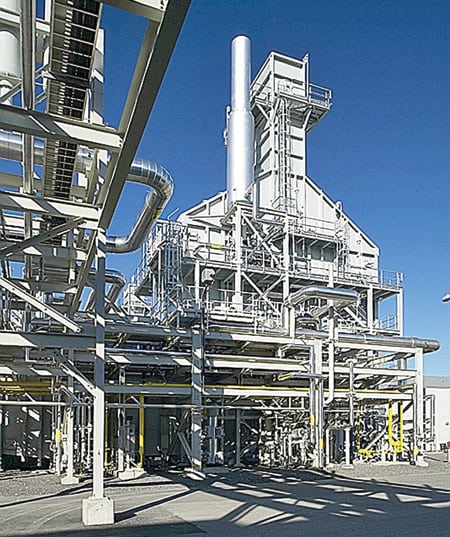 3. Dry as a bone. The once-through heat-recovery boilers can be operated dry indefinitely. They also can be started and ramped up to design output levels within one hour, if need be. Courtesy: GTAA

The other option is to run the cogen plant in simple-cycle mode and not produce steam—just run the OTSGs dry, which is allowable. The plant’s design and the materials used in its steam system give operators that choice; this is a key to redundancy in the event that a regional power failure eventually curtails municipal water supply. When cogeneration or combined-cycle operation is needed, an operator can initiate the steam generation process by introducing feedwater to the OTSGs. Their combined output is desuperheated and bypassed to the steam turbine’s condenser until it meets prescribed temperature and pressure specs. At that point, the steam turbine can be started up.

This operating flexibility of the cogen plant is tested virtually every day. During summer months, it is started up daily, usually in the morning, and runs until after evening peak demand has passed. In the winter, the plant isn’t started up until just before the afternoon peak. Although operating economics are the key driver of its scheduling, the cogen plant and the CUP could supply all of the airport’s energy needs if there were a regional power outage.

The GTAA Cogeneration Complex has several other operating characteristics that larger facilities powered by frame gas turbines can only dream of. For example, all it takes is a push of the start button to bring the two gas turbines to life and synchronize them to the grid within 25 minutes.

Some of this flexibility must be attributed to the once-through heat-recovery units. As mentioned earlier, they can be started with no water in their tubes because they are certified for dry operation at up to 1,000F. Because the exhaust of the LM6000PDs is at a relatively cool 820F, the OTSGs can be run dry for an extended period of time. They can be ramped up to design steam conditions within 60 minutes of a gas turbine start—much quicker than traditional drum heat-recovery steam generators.

The most interesting OTSG start-up permissive is the unit’s stack gas temperature. Until this temperature reaches a certain level, warm water, rather than steam, will be flowing through the OTSG tubes. Because experience has shown that this transition temperature is reached 15 minutes after gas turbine synchronization, that’s where the permissive is set. After the OTSG starts up, the plant’s distributed control system ensures that feedwater is added to the unit’s high- and low-pressure sections at the proper rate, determined by a “feedwater forwarding curve.” During winter months, the low-pressure steam generated by the OTSGs is sent to the CUP to replace the steam generated by the CUP’s existing package boilers. This heat is used to provide space heating and energy savings with the reduction of natural gas consumption (Figure 4). During the summer, the low-pressure steam is sent to the CUP to power the steam turbineï¿½driven centrifugal chillers, thereby reducing electrical consumption by up to 3 MW while still meeting the cooling requirements of the airport. 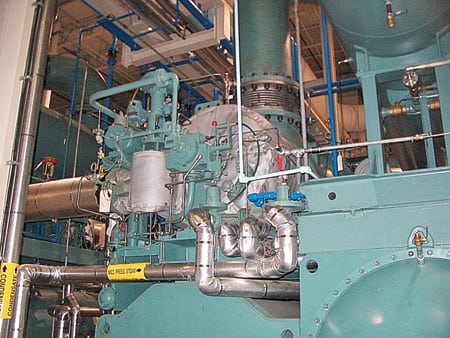 4. Steam in, cold water out. The Central Utilities Plant adjacent to the GTAA Cogeneration Complex has two 2,000-ton/hr steam turbine-driven chillers. They can be powered by steam extracted from the combined-cycle cogen plant or by steam from four dual-fuel-capable package boilers within the CUP. Courtesy: GTAA

The main steam supply to the CUP is managed at a 150-psig extraction port. The steam extracted from the GTAA’s steam turbine is given a few degrees of superheat to minimize moisture formation. The turbine’s throttle conditions are 750 psi and 150 to 170 degrees F of superheat. Activating the OTSGs’ duct burners will double each unit’s steam generation rate from the typical 100,000 lb/hr to 225,000 lb/hr. This design feature makes operation of the CUP as flexible as that of the cogen plant.

As you might expect, the treatment requirements for the feedwater used by the once-through heat-recovery units are strict, because any impurities can be scaled directly onto the inner-tube surfaces. To avoid this situation, makeup water (from Toronto’s public water system) is treated by mixed-bed polishers until it reaches a purity of 0.18 microSiemens.

The two GE LM6000PD gas turbine-generators have operated extremely well since coming on-line in February 2006. Since then, each has accumulated approximately 4,300 operating hours and more than 500 starts.