U.S. nuclear power plants kept operating at high levels of safety and efficiency in 2005, according to performance indicators compiled by the World Association of Nuclear Operators (WANO). Nuclear power accounts for 19.4% of American electricity production.

Last year, U.S. nuclear plants produced 783 billion kWh, nearly equaling 2004’s all-time record of 789 billion kWh. That was remarkable performance, considering that more than 40% of the nation’s 103 nuclear reactors were shut down for refueling last spring, compared with 25% in the spring of 2004.

The U.S. nuclear power sector also sustained near-record safety performance in areas such as safety system reliability, worker safety, unplanned automatic reactor shutdowns, and protection of workers from radiation exposure. “The stellar 2005 performance indicators exemplify the nuclear industry’s ability to achieve excellence over a period of many years,” said Frank L. “Skip” Bowman, president and CEO of the Nuclear Energy Institute. “The performance measures clearly demonstrate that the U.S. continues to be a world leader in safe and secure nuclear plant operation.”

The performance data compiled by WANO are analyzed by the Atlanta-based Institute of Nuclear Power Operations (INPO), which promotes excellence in U.S. nuclear power plant safety and operations. INPO uses the data to set challenging benchmarks against which plant safety and operation can be measured. Other highlights of the U.S. nuclear power industry’s performance in 2005 include:

The American Wind Energy Association (AWEA) recently released its annual snapshot of wind power development in the U.S. Each year, the AWEA ranks purchases and sales of wind energy and turbines by state, supplier, owner, and buyer. Together, the rankings provide a useful measure of the size, breadth, and growth of the American wind power sector.

The roller-coaster pattern of wind power development between 1999 and 2004 reflected the uncertainties caused by expirations and after-the-fact extensions of the federal wind energy production tax credit (PTC). In 2005, for the first time in its history, Congress extended the PTC—now at 1.9 cents/kWh—for two years before it expired. The early action boosted investors’ confidence in the wind power sector, restoring positive momentum to project development.

AWEA rankings tell the rest of the story and provide a reference point for the recently accelerated growth of U.S. wind power, which has long lagged that of European nations. “Wind energy’s continuing expansion, as reflected in the rankings, provides fresh evidence that it is becoming more competitive with conventional power sources,” said AWEA Executive Director Randall Swisher. “Wind is a clean, safe, domestically abundant, and affordable energy source, and one of our best options going forward.”

Top states, by installed capacity. At the end of last year, California was still the leader in installed wind power capacity—as it has been since 1981, when its first turbines arrived (Table 3). But Texas gained fast last year and is expected to become No. 1 this year.

Two large projects came to fruition in Oklahoma last year—the 147-MW Weatherford Wind Energy Center and the 151-MW Blue Canyon II project. Wyoming, which was fifth in last year’s ranking, was overtaken not only by Oklahoma but also by New Mexico (which added 140 MW of wind power in 2005), Washington (which added 149 MW), and Oregon (75 MW).

Largest U.S. wind farms. Wind farms have been getting bigger to maximize economies of scale. The Horse Hollow Wind Energy Center in Taylor County, Texas, joined the ranks of the top five “single” facilities in 2005 (Table 4). AWEA considers a wind farm “single” if its owner(s)/builder(s) are the same and it is geographically contiguous.

Largest U.S. holdings. FPL Energy still dominates the ownership ranking (Table 5). Its fleet also grew fastest in 2005, adding another 500 MW. PPM Energy jumped from fifth in the previous year’s ranking to second by adding nearly 400 MW last year. The company has stated that its goal is to have 2,300 MW of wind generation in operation by 2010. MidAmerican Energy, in third place, leads the ranks of utilities building and owning wind power for their customers’ use. Caithness Energy and Edison Mission Group were newcomers to the top five this year.

Largest wind turbine suppliers, by installed capacity. Turbines from GE Energy dominated the U.S. market in 2005 (Table 6), accounting for nearly 60% of the new capacity added. Vestas was a distant second with a 30% market share. Rounding out last year’s top five are Mitsubishi, Suzlon, and Gamesa; each now has a factory in the U.S.

Largest wind power buyers, by capacity. With commitments to purchase 1,048 MW on its books on December 31, 2005, Xcel Energy nosed out Southern California Edison (SCE)—the traditional leader—at the top of the list of purchasers of U.S. wind power capacity (Table 7). The competition between the utilities looks set to intensify: Xcel has announced its intent to buy 775 MW of new wind power capacity for its Colorado system by 2007; SCE has contracts to purchase 393 MW from facilities still under construction.

For more information on wind energy growth in the U.S., visit www.awea.org.

Canadian wind picking up, too

Edmonton-based EPCOR Utilities Inc. celebrated the start-up of its Kingsbridge I Wind Power Project in Ontario on April 6, nearly three months ahead of schedule. All 22 turbines of the 40-MW wind farm (Figure 3) now are putting kilowatt-hours onto Ontario’s electrical grid. The facility is expected to produce 109,000 MWh annually. 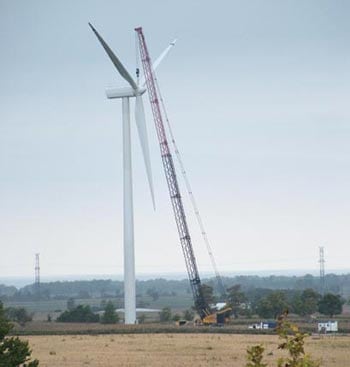 “We’re pleased to be helping the province meet the energy needs of Ontarians,” said EPCOR Senior VP Paul McMillan. “We thank the community for their support in getting Kingsbridge I completed ahead of schedule and for helping us get the next phase of the project—Kingsbridge II—started.”

In November 2005, EPCOR signed a power-purchase agreement with the Ontario Power Authority for the entire capacity of Kingsbridge II, now under construction to the north. Kingsbridge II will have 69 wind turbines and a nameplate capacity of 160 MW.

As of January 2006, Canada had a total installed wind power capacity of 683 MW.

As one of the largest container ports in Brazil, the Port of Pecém (Figure 4) ships out 60% of the products exported from the State of Ceará. To ensure that its electrical infrastructure remains reliable as traffic increases, two years ago the port began augmenting kilowatt-hours from the local utility with natural gas–fired peaking and standby engine-generators from Cummins Power Generation.

“In Brazil, power isn’t always very reliable. There are often random outages that can wreak havoc with tight international shipping schedules,” explained Marcilio Rocha, coordinator of the secretary of infrastructure of the State of Ceará. 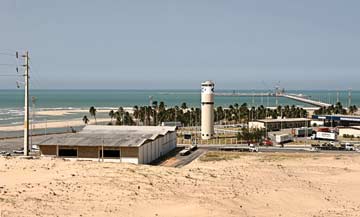 4. Power for port protection. The Port of Pecém, one of the largest in Brazil, uses on-site engine-generators to power equipment and machinery during peak demand periods. Courtesy: Cummins Power Generation

The port’s on-site system consists of three 1750GQPB lean-burn engine-generators (Figure 5) with a total capacity of 5.25 MW and a diesel genset with “black-start” capability. The load on the units varies with the port’s activity level but rarely exceeds 2 MW. “By far the largest load is refrigeration for fruit, said Rocha. “But the Cummins gas generators can handle the port’s entire demand should the situation arise.” 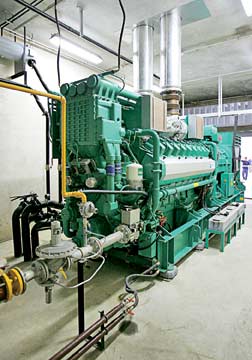 Since their installation two years ago, the gas engine-generators have not only made port operations more reliable, but more economical as well. Running weekdays during the peak demand period of 5:30 to 8:30 p.m., the gensets produce power at one-third the cost of supply from the local utility, according to Rocha.

Compliance with a new international standard for port security has been yet another benefit of the backup gensets. The International Code for Protection of Ships and Port Installations (ISPS Code) now requires all major ports worldwide to be capable of powering their loading equipment and other machinery in the event of a local utility outage. To date, 162 countries have signed the ISPS Code. On June 17 of last year, the Port of Pecém was certified as the first Brazilian port compliant with the new standard. 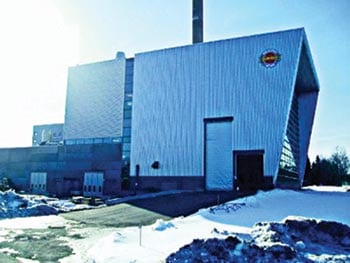 According to Mats Johansson, managing director of Trollhättan Energi, “We’re a growing community, and we’d like to power that growth with something other than traditional fossil fuels. About 95% of Trollhättan’s district-heating needs now come from wood chips, a renewable energy resource. We consider the investment we’ve made economically sound, both for us and our customers.”

At the heart of the Lextrorp plant is a Wärtsilä BioPower 5 DH boiler/turbine/generator that burns by-products from the local forestry industry. It has a thermal output of 17 MW and an electrical output of 3.5 MW.

The BioPower plant (Figure 7) operates on a closed steam/feedwater system separate from the district heating water system. Steam generated in a watertube boiler is supplied to a backpressure steam turbine that drives an alternator. Turbine exhaust steam then heats water for district heating, with condensate used as feedwater for the boiler. Patented Wärtsilä BioGrate combustion technology ensures that biofuels are burned efficiently, with low emissions of NOx and CO.

Power surfing from Scotland to Germany

Voith Siemens Hydro Power Generation GmbH has announced that it will supply the technology for the first wave power station in Germany. The nominal capacity of Germany’s first near-shore power plant will be 250 kW, with estimated annual electricity production of 400 MWh. 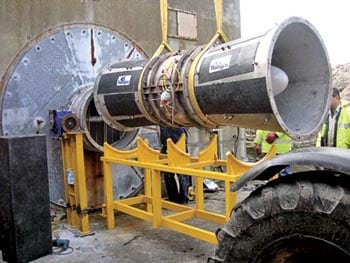 8. Marine megawatts. The Limpet wave power system on a test stand prior to installation. Courtesy: Wavegen

9. A shore thing. A complete 500-kW Limpet at home on Scotland’s Isle of Islay. Courtesy: Wavegen

“The project planned for Germany is a milestone on the road to the commercial use of marine energy, and we’re proud to contribute with our technology,” said Dr. Hubert Lienhard, president and CEO of Voith Siemens Hydro. “The trust that our partners EnBW and the government of Lower Saxony have placed in Wavegen oscillating water column [OWC] technology confirms that we are leaders in this field.”

OWC-based plants generate electricity by exploiting the compression and decompression of air within a chamber as a column of water inside it rises and falls due to wave motion. In the case of the Limpet plant (which has been optimized for annual average wave intensities of 5 to 8 kW/ft), the water column is connected to a pair of counter-rotating Wells turbines that are in turn connected to 250-kW generators.