Look out Tesla, the Germans are coming.

The U.S. residential energy storage market took another step forward on January 29 when German firm sonnen announced that it was partnering with solar manufacturer SolarWorld to offer residential solar-plus-storage systems in the U.S., much like the systems announced by Tesla and Solar City last April.

Unlike Tesla, however, sonnen has a significant track record with residential storage. The company is the leading supplier in Europe, where it says it has installed more than 10,000 systems since 2011. Part of this is because the German residential electricity market provides rate incentives for home storage that are much less common in the U.S., though some markets such as California are shifting in that direction.

Sonnen is introducing what it calls the sonnenBatterie eco, a battery unit about the size and dimensions of a small refrigerator (Figure 1). The eco is available in capacities of 4 kWh up to 16 kWh, and has an integrated smart inverter and control system allowing it to function as a home microgrid. Within that range, the eco units can be sized in 2-kWh steps. 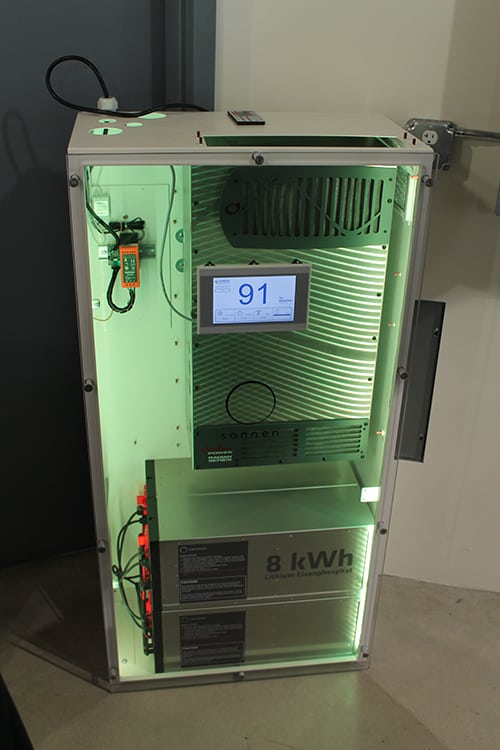 Sonnen says they are guaranteed for 10,000 cycles or 10 years of use. The batteries are priced at $10,000 for the 4 kWh model up to $24,000 for the 16 kWh model. That’s more than Tesla’s PowerWall home battery, but Greg Smith, sonnen’s senior technical trainer, sought to contrast the eco against the PowerWall by saying the eco is capable of deeper cycling and more total cycles over its lifetime.

A larger Pro version designed for commercial use is available in capacities of 18 kW/24 kWh up to 90 kW/240 kWh, and is intended mainly for peak shaving.

Sonnen executives made the announcement at the opening of their U.S. headquarters in Burbank, Calif. The event was less lavish than Tesla’s live-streamed party, but sonnen’s ambitions are no less substantial. The company also announced a partnership with PetersenDean, the nation’s largest residential roofing company, and another with financing firm Spruce aimed at developing new financing approaches for energy storage.

Boris von Bormann, CEO of sonnen’s U.S. operations, told POWER the eco battery is not merely a version of their German product but has been “completely redesigned” for the U.S. market. “The German electricity market is very different from the U.S. market, we don’t have time-of-use, we don’t have demand charges, so the software platform had to be rebuilt.”

Sonnen Global CEO Christoph Ostermann told POWER sonnen is aiming to build a community of battery owners who can use networked systems to maximize the value of their batteries, which are capable of communicating in a peer-to-peer network that can aggregate the capacity of the individual systems in the market as a sort of virtual power plant.

“It’s a revolutionary power product,” he said. “The energy industry has to become more decentralized.”

Smith said, “When you have a whole network of these integrated smart systems, it’s easier on the grid operators. It’s not like having a lot of dumb PV-connected inverters overstressing the grid like you’ve seen in Hawaii.” But getting there will require a lot of education for utilities and other regulators, he noted. “We still have building inspectors who don’t know how to inspect PV systems.”

Von Bormann said the integrated solar-storage system would potentially be able to meet 100% of a homeowner’s electricity needs in addition to providing emergency backup power and the ability to take advantage of time-of-use electricity pricing where available. The system can control certain connected devices such as appliances and turn them off as necessary to conserve power.

Though changing regulations mean certain challenges, von Bormann was confident the system could find a place in the market because of the benefits it offers.

“At the end of the day, that will remove a lot of stress from the grid,” he said.

Sonnen said the financing products would be available in the first quarter of 2016. Since its entry into the U.S. market, sonnen has established a research and development facility in Atlanta and its U.S. factory in San Jose, Calif.