General Electric’s (GE’s) H-Class power generation equipment technology will be used at a new natural gas-fired power plant in Louisiana. GE on Sept. 1 said it received an order from Kindle Energy for a 7HA.03 gas turbine to serve the 725-MW Magnolia Power Project that will be built in Plaquemine.

GE in a news release said the Magnolia plant “will be the most efficient plant in the MISO [Midcontinent Independent System Operator] South system and it will help support the ongoing energy transition in Louisiana.” The company said that while the plant will initially burn natural gas, it will have the ability to utilize as much as 50% hydrogen in its fuel mix in the future. Kindle officials have said the plant could burn hydrogen on its first day of operation.

Kindle Energy began talking with Louisiana officials a few years ago about building a plant in that state. The New Jersey-based group manages and operates more than 11 GW of power generation assets, including 12 gas-fired and two coal-fired facilities, in Maryland, New Jersey, Texas, Ohio, and Indiana. Those include the massive 2.6-GW Gavin coal-fired plant in Ohio.

The Magnolia project is expected to provide power for at least five electric co-operatives in Louisiana. Those co-ops also have agreements in place to receive power from three solar projects.

GE touts that its H-class equipment has achieved two world records for plant efficiency in a combined cycle application. The HA turbine can operate on varied fuels, including blends of natural gas and hydrogen.

“A mix of flexible and efficient energy sources will be necessary to achieve the carbon emissions goals of Louisiana,” said Lee Davis, CEO of Kindle Energy. “By utilizing GE’s flexible and highly efficient 7HA.03 gas turbine, we will support the growth of renewable energy sources which will ultimately play a critical role in facilitating the transition to a lower carbon future in the state. In addition, we selected GE’s turbine because it is capable of using up to 50% by volume of hydrogen for fuel.  When compared to other gas-fired power generation technologies, GE H-class power plant offers the lowest capital cost per megawatt, with tremendous benefits to the residents of Louisiana.”

Louisiana regulators approved the Kindle Energy-Magnolia Power Project earlier this year. The plant is sited in Iberville Parish. Officials have a few hundred jobs will be created for the plant’s construction, with 20 to 25 full-time positions once the plant is operational.

The plant, in addition to its 7HA.03 gas turbine, will feature other GE equipment, including an STF-A650 steam turbine, a triple pressure with reheat Heat Recovery Steam Generator (HRSG), and the Mark* VIe Distributed Control System (DCS) software solution. The STF-A650 is a two-casing steam turbine featuring a separate high pressure (HP) and combined intermediate pressure (IP) and low pressure (LP), or IPLP, section. The Magnolia unit will use GE’s ST modularized approach utilizing shared HP, IPLP, and LP modules across the entire combined cycle ST portfolio to ensure high level of availability and reliability, according to GE, which also will provide what it called a “full spectrum” of services for the plant. 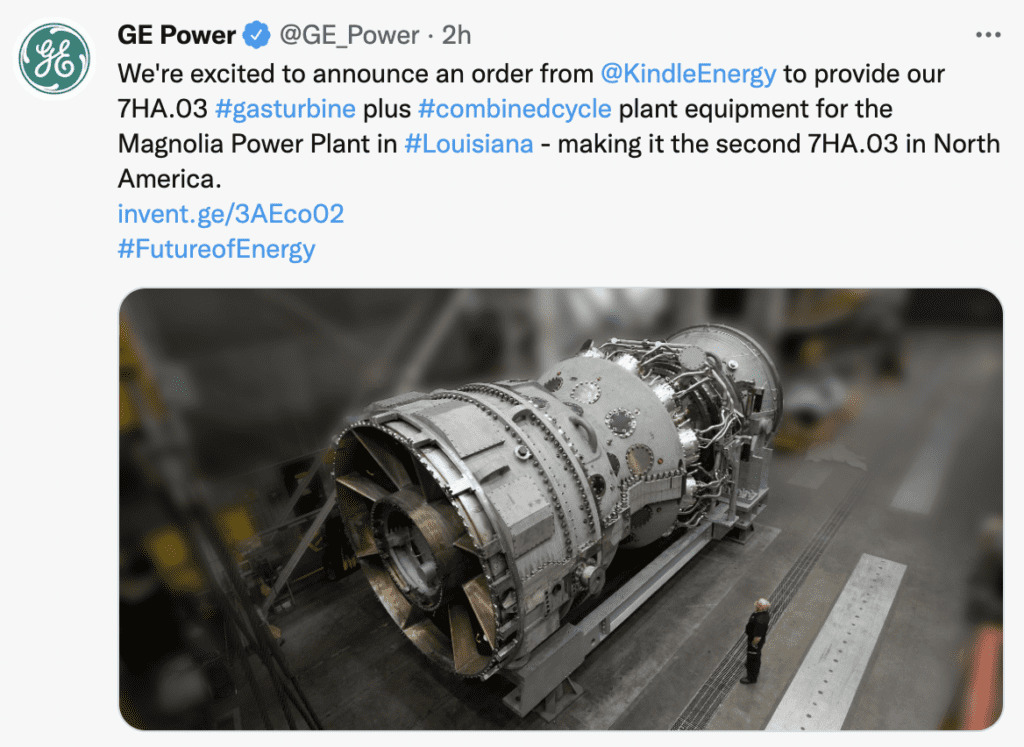 “In a region with an increasing power demand due to planned coal-fired plants retirements, Magnolia will be first new GE combined cycle plant to be installed in the MISO South RTO in about 20 years, and is expected to be the most efficient once it begins operation,” said Eric Gray, CEO of GE Gas Power. “We are tremendously proud to continue our ongoing relationship with Kindle Energy—sealed through more than 11 GW of electricity projects including a 7HA.02 and 15 F-Class gas turbines—as we work together toward supporting a lower-carbon future in Louisiana.”