A few years ago, skyrocketing energy costs and tighter emissions limits prompted officials at the Wastewater Treatment Division of King County’s Department of Natural Resources and Parks in Washington State to explore innovative ways to provide electricity for its facilities. The end result? Locals are breathing easier and the county is spending less on energy since the world’s largest high-temperature fuel cell power plant went on-line at the South Wastewater Treatment Plant in Renton, a Seattle suburb.

All fuel cells generate electricity without combustion, and as a result they generate virtually no air pollution. But high-temperature fuel cells (see box)—such as the 1-MW Direct FuelCell (DFC) unit from FuelCell Energy Inc. (Danbury, Conn.) now operating at King County’s treatment plant (Figures 1 and 2)—also deliver a useful heat byproduct that can be used to power a district heating system or air-conditioning system’s absorption chiller, or to provide hot water or process steam. In Renton the heat is used by the wastewater treatment plant to anaerobically convert sludge into a gas, which is then used to fuel a DFC1500-based power plant in a virtuous cycle. The synergistic relationship between the power plant and the wastewater treatment process, which squeezes the last Btu from the system, is truly a process engineer’s delight. 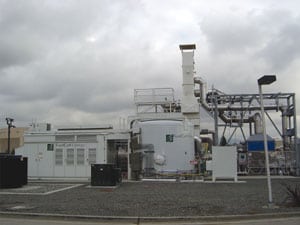 1. Sludge power. This wastewater treatment plant in King County, Wash., is home to one of FuelCell Energy’s 1-MW Direct FuelCells, which produces heat as well as electricity. 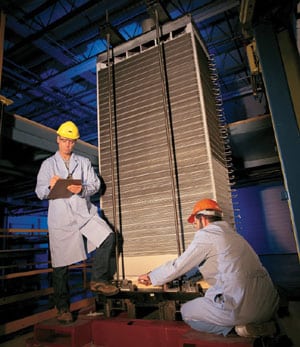 2. Checking it out. Technicians at FuelCell Energy’s factory in Connecticut inspect a fuel cell module before it is shipped off to King County. Several modules are piggybacked to form a fuel cell stack—in this case, one with a generating capacity of 1 MW.

Your tax dollars at work

Federal funds are helping to make this project economically attractive. The U.S. EPA is subsidizing it via a $12.5 million grant, and the agency is on the peer review team. Meanwhile, King County and FuelCell Energy are splitting the rest of the project’s $19 million cost. However, the key goals of the project are to prove the operation of FuelCell Energy’s first megawatt-class product in the field and to demonstrate that anaerobic digester gas can fuel DFC1500 power plants.

"As a national demonstration site for the EPA, our facility is demonstrating both the compatibility of fuel cells with renewable gas resources and fuel cells’ potential to significantly reduce greenhouse gas emissions," says Greg Bush, manager of wastewater planning and compliance for King County.

Although it’s early in the two-year demonstration, results to date have exceeded expectations. The project’s electrical efficiency of 45% is unparalleled for any power generation technology of similar size, and its overall thermal efficiency—including the heat output—exceeds 65%. "We’re very pleased with the preliminary results," Bush says. "Among them are reliability metrics; the power plant has already operated for more than 2,000 hours with 93% availability."

Another goal that has been achieved—although it wasn’t in the original plan—was to first operate the plant on natural gas and submit the requisite operating data to certify its compliance with the strict air emissions requirement of the California Air Resources Board 2007 standard. The power plant received this certification in September 2004. Shortly thereafter, FuelCell Energy announced the sale of its first commercial DFC1500 to Alameda County’s Santa Rita Correctional Facility.

FuelCell Energy has been quite successful at deploying its Direct FuelCells, which are available in sizes ranging from 250 kW to 2 MW. According to Jerry Leitman, the company’s president and CEO, "Through mid-December 2004, nearly 40 DFC installations have generated over 53 million kWh at customer sites, and another 40 units are expected to be installed over the next 12 to 24 months."

That’s good news for FuelCell Energy. But for residents of greater Seattle and other communities where the fuel cells are operating, the even better news is cleaner air. Compared with combustion-based generators, the DFC units put out 99.96% less NOx, 99.99% less SO2, and 59% less CO2.

All fuel cells have three key components: an anode, a cathode, and an electrolyte. The several different types of fuel cells are distinguished by the composition of their electrolyte, supporting structure, and the electrochemical process involved.

Molten carbonate salts serve as the electrolyte in FuelCell Energy&apos;s Direct Fuel Cell (DFC) technology, which is the most efficient on the market today. The name refers to the cells&apos; operation at a temperature of about 1,200F, an environment that enables a catalyst to extract hydrogen from a hydrocarbon fuel internally, within the fuel cell module itself. Another consequence of high-temperature operation is that FuelCell Energy&apos;s products do not need pure hydrogen. They have demonstrated their ability to be powered by a variety of fuels, including anaerobic digester gas (such as in King County), natural gas, propane, coal gases, and even diesel fuel.

Few permits were required for the project. For example, because its emissions are so low, the project was exempted from air permit requirements of the Puget Sound Clean Air Agency. However, although all of its power output is used by King County, the DFC1500 is connected to the local grid and thus is dispatched by Puget Sound Energy.

The ability to use waste gas as fuel could be a boon for fuel cell manufacturers. King County recently identified more than 400 wastewater facilities in the U.S. that generate enough digester gas to fuel a 1-MW power plant. And a few years earlier, FuelCell Energy sponsored a study that concluded that more than 550 municipal wastewater treatment facilities in the U.S. generate enough gas to keep a 250-kW fuel cell power plant running. In Japan the potential is estimated as approximately 2,000 MW.

One niche at a time

Based on early positive results at the first megawatt-scale DFC power plant (Figure 3), as well as the cumulative operating experience at nearly three dozen sub-megawatt units, fuel cells seem to have broken the code on how to integrate themselves with industrial applications. But other market segments are also getting traction. As an example, FuelCell Energy and its distribution partner, Caterpillar Inc., recently dedicated the first DFC power plant designed for "utility grid support" in the city of Westerville, Ohio. 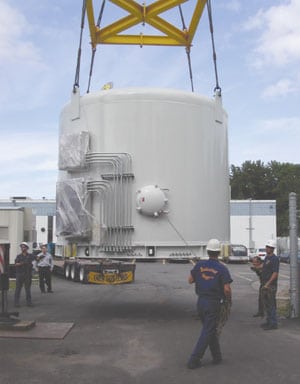 3. A little to the right. Construction workers at the King County treatment plant maneuver a fuel cell fuel tank into place. All of the components were manufactured in Connecticut and then transported to Washington, where they were assembled.