No other country has been as frequently cited as an example of exploiting the virtues of a nuclear-heavy energy policy as France. Deriving more than 75% of its electricity from 58 operational nuclear reactors with a total capacity of about 63 GW, France has one of the lowest costs of generation and is the world’s largest net exporter of power, earning €3 billion ($3.9 billion) a year from sales of surplus power to buyers beyond its borders. But that is all about to change.

Considering that nuclear energy is so important to France, it is no surprise that it has featured in blueprints of the country’s economic future. Spearheaded by former President Nicolas Sarkozy, the country in 2008 established the Agence France Nucléaire International (AFNI), a vehicle to help set up civil nuclear programs in other countries. Sarkozy’s government called for a massive resurgence of nuclear power, extolling its ability to combat climate change, provide an economic boost, and achieve energy independence.

But even before the devastating Fukushima crisis in Japan in March 2011, experts say some French citizens had been pushing back, contesting the almost “religious consensus” on the matter of the country’s reliance on nuclear power. As early as 2008, a few nuclear experts associated with Global Chance (whose members are academic and institutional scientists—a group comparable to the Union of Concerned Scientists in the U.S.) confronted what it called the “official narrative.”

They alleged that the image of France’s nuclear program as a highly successful industry was a “sham.” Development of nuclear power was marked by a “succession of technological blind alleys, planning errors and all kinds of difficulties, which are generally noted and corrected without any public discussion.” The economic justification of vending nuclear technology was also particularly suspicious, the group claimed, citing a lack of transparency on several crucial levels: Official projected investment costs for a number of projects were consistently lower than actual costs, and—as exemplified by the two EPR reactors under construction at sites in France and Finland—construction times and load factors often lagged behind projected figures.

When the Fukushima accident happened, as Germany and Taiwan vowed to phase out nuclear power entirely, cracks in France’s nuclear facade widened. Public concerns for safety mounted as anti-nuclear groups highlighted startling statistics that showed French nuclear plants saw 700 to 800 incidents a year, varying in seriousness. And when Socialist François Hollande ran on a platform proposing to reduce nuclear’s share of the country’s energy mix from 75% to 50% by 2025, and pledged to order the closure of the two-unit Fessenheim before the end of his first term in 2017, he won, albeit narrowly, over incumbent Sarkozy, who had called Hollande’s policies “economically disastrous.” 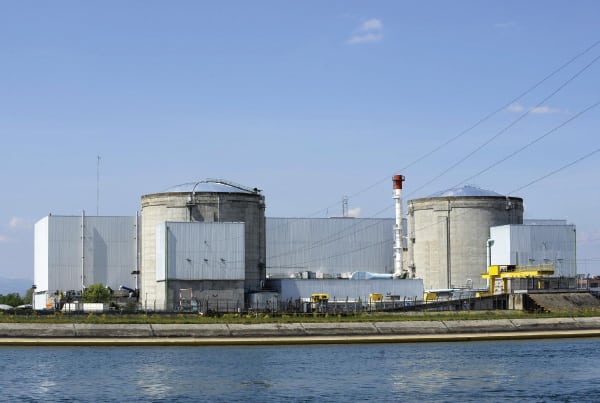 ï»¿1. The end of an era.ï»¿ Newly installed French President François Hollande defeated incumbent Nicolas Sarkozy in May by running on a platform that proposed to cut France’s share of nuclear energy from 75% to 50% by 2025 and to shut the 1978-built two-unit Fessenheim plant, shown here, before the end of his term in 2017. Fessenheim, located in the Alsace region of northeastern France, is the country’s oldest nuclear plant. French regulators in 2011 deemed the plant suitable to operate for another 10 years if it made some improvements. Courtesy: EDF

Hollande has, since the election, reiterated his pledge to cap nuclear’s share at 50%, promising a transition strategy based on energy efficiency and renewable energy. At a two-day conference in September, he said his government was pushing for closure of France’s oldest nuclear plant, the 1977-built Fessenheim plant in Alsace, near the German border, within four years, and that it would “make an example” of successful decommissioning (Figure 1). Meanwhile, he said new tenders for solar and offshore wind power would be launched before the end of 2012.

Even though France’s nuclear industry employs about 400,000 heavily unionized workers, the avowal has not been strongly politically contested—save by the Greens Party, which captured 17 parliamentary seats in May after coalescing with the center-right Socialists and having accepted the Socialists’ goal of a 50% nuclear cap (which is far higher than their own goal of zero).

Site directors of all nuclear plants operated by Fessenheim’s owner EDF have protested the closure of Fessenheim in an open letter, calling it a “profound injustice.” The decision would “create uncertainty about EDF’s plans for its nuclear plant fleet” and casts doubt on “employment and economic development” for the regions in which nuclear plants are sited, the letter said.

Some experts express skepticism about how France will carry out the transition. At the end of 2011, of France’s total generating capacity of 126 GW, 25 GW was hydro, 28 GW fossil fuel, 6.6 GW wind, and 2.2. GW solar PV. Counting hydro, renewables made up 13% of the country’s total generated electricity—but that is well below the 23% target set by Sarkozy for 2020. Experts point out that compared with its neighbors Germany and Spain, only 2% of generated power comes from wind, while solar power makes up less than 0.5%.

Most nuclear industry stakeholders in France concede that a fair debate on France’s energy future is warranted. A formal national discussion has been scheduled by Minister for Environment, Sustainable Development and Energy Delphine Batho. It includes an “information phase” that will take place between November and December this year, followed by a public participation phase (via webcast and regional conferences) from January through April 2013. Recommendations for the energy transition will be made in May 2013 following the discussion, and a new energy policy bill could emerge as early as June 2013. Batho has noted that the discussion will pay particular attention to “social issues and economic transitions as well as industrial and professional retraining authorities.”