After months of preparation, Norway’s StatoilHydro and Germany’s Siemens in June erected the world’s first large-scale floating deepwater wind turbine some 7 miles offshore Karmøy, southeast Norway, on the 720-feet-deep waters of the Amoy Fjord. The developers are now gearing up to connect the Hywind turbine to the local grid, and it could begin producing power as early as mid-July.

Siemens provided the SWT – 2.3-MW wind turbine, which has a rotor diameter of about 270 feet and a nacelle that towers 213 feet above the waves (Figure 4). The company said that the Hywind was designed to be suitable for installation in water depths of between 390 feet and 2,300 feet, opening up new possibilities for offshore wind technologies. Currently relying on turbines mounted firmly on the seabed, offshore wind turbines are limited to shallow waters because it is costly to install foundations at water depths of more than 100 feet to 165 feet. 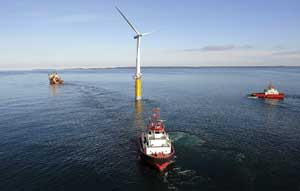 4.     Floating an idea. Siemens and Statoil Hydro in June erected the world’s first large-scale floating deepwater wind turbine 7 miles offshore Karmøy, southeast Norway, in waters that are 720 feet deep. The Siemens SWT–2.3-MW turbine has a rotor diameter of about 270 feet and a nacelle that towers 213 feet above the waves. To keep it afloat, the Hywind turbine sits atop a buoy—based on the design of oil production platforms and offshore loading buoys—that has been anchored to the seabed by three wires. The project could be connected to the local grid as early as mid-July. Courtesy: Siemens

The wind turbine sits atop a "Spar-buoy," which is based on the design of oil production platforms and offshore loading buoys. The steel floater — which extends more than 330 feet beneath the surface — is filled with ballast and fastened to the seabed by three anchor wires. The control system for the turbine, a joint development between StatoilHydro and Siemens, addresses operating conditions of a floating structure, allowing it, for instance, to dampen out part of the wave-induced motions of the floating system.

Offshore wind development has taken off around the world — especially in Europe, where Denmark and the UK have taken the reins, installing a combined nameplate capacity of 1,103 MW. Including the Hywind in Norway, offshore projects have also been installed by Belgium, Sweden, Finland, Germany, the Netherlands, and Ireland. France, Italy, Poland, and Spain, meanwhile, have plans to complete installations by 2015.

The U.S. — the country that leads the world in land-based installed wind capacity, with 28,200 MW (as of April 2009) — has yet to build its first offshore wind farm, though a number of projects are moving through the development process. Earlier this year, the industry received a boost when the Department of the Interior (DOI) and Federal Energy Regulatory Commission agreed to end a long-standing turf war that had hampered permitting and stalled renewable energy projects in offshore waters. This June, for the first time ever, the DOI issued five exploratory leases for wind energy development on the Outer Continental Shelf offshore New Jersey and Delaware. The leases will allow companies to construct weather towers 6 to 18 miles offshore to collect data on wind speed, intensity, and direction.

As some companies test new ways to make deepwater offshore wind power viable, several others are looking to pilot wind technologies that harness jet streams so high in the sky that cruising airliners would have to steer around them. According to Stanford environmental and climate scientists Cristina Archer and Ken Caldeira, winds in these high-altitude jet streams hold roughly 100 times "more energy than all the electricity being consumed on Earth."

"If you tapped into 1% of the power in high-altitude winds, that would be enough to continuously power all civilization," Caldeira said. In comparison, similar solar cells would cover roughly 100 times more area than a high-altitude wind turbine, he said.

The researchers’ findings, published in the May issue of the journal Energies, were reached from analysis of 27 years of data from the National Center for Environmental Prediction and the European Centre for Medium-Range Weather Forecasts. By studying the distribution of wind power in the atmosphere, by location and time, they found that winds at altitudes around 32,000 feet have the highest wind power density. Some regions — like Tokyo and Seoul, which are affected by the East Asian jet stream — had a higher power density. On the other hand, Mexico City and São Paolo, which are located at tropical latitudes, are rarely affected by polar and subtropical jet streams and therefore have lower wind power densities.

Archer and Caldera claim that tethered wind-turbine kites are the most cost-competitive technologies to harness the energy from jet streams — though these still have not overcome the challenge of fluctuating wind, they note. "While the winds at high altitude are much more consistent than the winds at the surface, they’re still not consistent enough," Caldeira said. Other hurdles include airliner interference, storage issues, and cost.

Even so, the scientists point to several designs with potential, such as Sky WindPower’s model, a single tethered kite of four connected turbines, each with spinning rotors (Figure 5). That kite transfers electricity back to a hub on the ground through its tether. 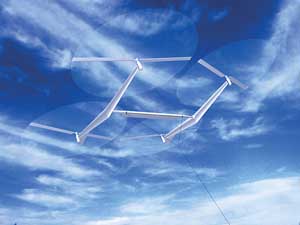 5.     Taking to the sky. A study by Stanford researchers concludes that sky-high winds at altitudes around 32,000 feet have the highest wind power density, and that tapping just 1% of the power of these winds would be enough to “power all civilization.” Several prototypes of turbines that seek to harness the energy in high-altitude winds have been proposed. An example is Sky WindPower’s model, a single tethered kite of four connected turbines, each with spinning rotors. Courtesy: Ben Shepard, Sky WindPower

Other models include the Kite Gen, an Italian project, which looks like an inverted carousel that pilots a kite or an array of kites over a predefined flight path. The kite is maneuvered by differentially unrolling and recovering the two lines on two winches controlled by engines. New York – based Magenn Power takes a different approach with its Magenn Air Rotor System (MARS), floating a helium balloon – like turbine that rotates around a horizontal axis in response to winds at altitudes between 600 feet and 1,000 feet. Rotation of the MARS device is kept stable by the "Magnus effect," which provides additional lift and keeps the MARS stabilized.