Deepwater Wind and project partners have commissioned and tested the 30-MW installation off the coast of Block Island, R.I., and it is now delivering power into New England’s grid via National Grid’s 20-mile-long sea2shore submarine transmission cable, the company said on December 12.

The project, which broke ground on April 27, 2015, was completed on time and on-budget, Deepwater said. It involved more than 300 workers and utilized four separate Rhode Island port facilities.

Construction of the turbine foundations took place from July through November last year. The project’s second round of construction began in late June, with turbine assembly beginning in late July and completing in August.

The wind farm comprises five 6-MW Haliade 150 turbines manufactured by GE Renewable Energy at its Saint-Nazaire plant in France. The direct-drive turbine design, developed by Alstom before the French company merged with General Electric, is specifically designed for a marine environment. The turbines are 170-meters (m) tall and have blades that are 150 m in diameter, covering a surface area of 17,860 square meters. 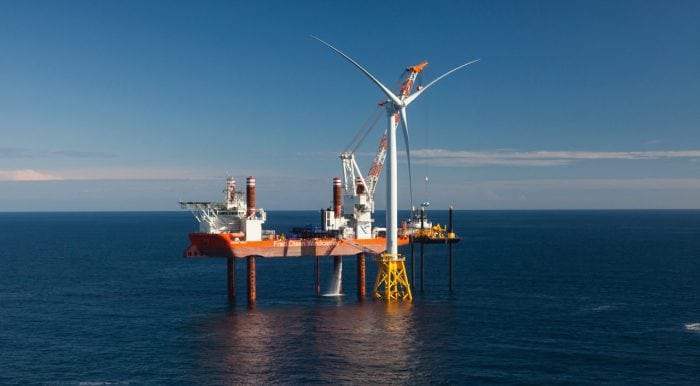 But several additional projects could be operating by 2020 in U.S. waters, the agency says, including three DOE-backed projects in New Jersey, Ohio, and Maine: Fishermen’s Energy Atlantic City Windfarm, Lake Erie Energy Development Corp.’s Icebreaker project, and the University of Maine’s New England Aqua Ventus I. As of August 2016, these projects were in the final design and planning phase. A total of nearly 16 GW have been proposed for development in U.S., the DOE said.

Meanwhile, Deepwater is now gearing up to build the proposed 1-GW Deepwater 1 wind farm in federal waters off Rhode Island and Massachusetts. The company has the financial backing of New York-based hedge fund DE Shaw and is looking to cement a power purchase agreement with the Long Island Power Authority for the first 90-MW South Fork phase.