A year after Exelon Nuclear ceremoniously announced the selection of General Electric-Hitachi’s Economic & Simplified Boiling Water Reactor (ESBWR) design (Figure 2) as its preferred technology for a proposed two-unit nuclear facility in Victoria County, Texas, the operator of the largest nuclear power fleet in the U.S. — and the third-largest in the world — said it had reconsidered its decision. The company said it is now negotiating separately with Toshiba and GE-Hitachi, both vendors of the Advanced Boiling Water Reactor (ABWR), and with Mitsubishi Heavy Industries for its U.S. Advanced Pressurized Water Reactor (US APWR). 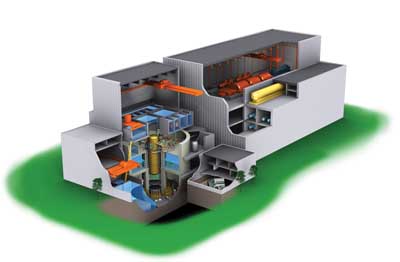 The company said it came to that decision after an "internal analysis conducted [last] summer showed that technologies other than the ESBWR provide the project greater commercial and schedule certainty." It wasn’t because the reactor had not yet received design certification from the U.S. Nuclear Regulatory Commission (NRC), said Exelon spokesperson Craig Nesbit.

"We still like the ESBWR design, but it remains very early in its development. We decided to switch technologies when it became clear that the ESBWR could not support our existing project schedules," he said. "Both the ABWR and APWR theoretically can."

Exelon had filed a combined construction and operating license (COL) application (prepared at a cost of $23 million) with the NRC only two months prior to its announcement this November. Though it said it would decide on an alternative technology by the first quarter of 2009 and revise that application accordingly, the company stressed that it had not committed to building the facility. That decision would be made in 2010.

Exelon’s 10 nuclear stations — with 17 reactors — represent approximately 20% of the U.S. nuclear industry’s power capacity, and nuclear energy currently makes up 19.4% of the company’s own generation portfolio. Exelon said recently that it filed the Victoria County COL application having considered a Department of Energy (DOE) projection that U.S. electricity demand would surge 25% by 2030, which meant the nation needed hundreds of new power plants. Based on DOE forecasts, maintaining nuclear energy’s share of the nation’s generation would require building three reactors every two years, starting in 2016.

But, in order to build new facilities, securing financing was imperative, Exelon said. Federal loan guarantees, which would pick up costs caused by regulatory delays, could help potential builders raise the necessary funds — but there aren’t nearly enough funds to go around. In late September 2008, 17 companies had responded by the close of a first-phase solicitation period for federal loan guarantees with proposals to build 19 new reactors at 14 proposed sites. Altogether, the companies had asked the Energy Department to provide $122 billion in loan guarantees — almost seven times the $18 billion originally allocated by the DOE.

Among the DOE’s selection criteria is the speed with which technologies can be commercialized. Only two of five reactor designs submitted for consideration to the DOE are currently certified by the NRC: GE-Hitachi’s ABWR and Westinghouse’s AP1000 pressurized water reactor. Design approval for the ESBWR is expected this year, with certification following next year. The NRC only received Mitsubishi’s US-APWR design certification application in December 2007, and it expects to issue its final decision in September 2011. A certification application for the final reactor design, AREVA’s US-EPR, was also received by the NRC in late 2007.

Exelon was one of four companies (along with Detroit Edison, Entergy, and Dominion) that had specified the ESBWR as the preferred technology for planned sites. It is not the only one to reconsider the design: In mid-January, reports surfaced that Entergy had asked the NRC to stop ESBWR-specific work on its COL applications, and Dominion was soliciting bids from other firms to lead the construction of another reactor technology. The three single-reactor COL applications in question were for Dominion’s North Anna plant, Entergy’s River Bend plant, and the Entergy-NuStart Grand Gulf plant.

Exelon confirmed to POWER that it was considering the ABWR — a design the NRC certified in 1997 — because 12 of its existing 17 reactors were Boiling Water Reactors. The US-APWR was also in the running because its other five existing reactors are Pressurized Water Reactors. Exelon is also taking into account that the 1,700-MW US-APWR design, which evolved from Westinghouse technology, was developed from a reactor that will soon be built in Japan.

Additionally, the company is considering the benefits of sharing scarce regional human and technical resources: ABWR is the same reactor design designated for the proposed South Texas Project’s Units 3 and 4 in nearby Matagorda County, while Luminant has chosen the US-APWR for its planned Comanche Peak Units 3 and 4 in north Texas’ Somerville County. "Ultimately, our technology selection will be the one that gives us the best opportunity for success," Nesbit told POWER.