The surge in natural gas production in the United States as a result of the shale boom has reversed long-standing assumptions about the nation’s energy future and the need for imports. Facilities such as Cove Point in Maryland and Sabine Pass in Louisiana that were built to import liquefied natural gas (LNG) over the past few decades have fallen idle, and their owners are now moving rapidly to convert them to export terminals. The possibility of large-scale LNG exports has seized the nation’s attention, leading to multiple congressional hearings and extended debate about their impact on the domestic energy market.

But there is one LNG facility that has held steadfastly onto its role as an importer, with little sign of relinquishing its importance: the Everett Marine Terminal in Massachusetts.

The Everett facility, located on the Mystic River in Boston Harbor, has been operating continuously since 1971, longer than any other import terminal in the U.S. Owned and operated by Distrigas of Massachusetts (DOMAC), a subsidiary of GDF Suez North America, the terminal currently supplies about 20% of New England’s annual natural gas demand.

The New England region has struggled with gas supply bottlenecks for decades, but until recently, the problems did not threaten reliability of the grid. Since 2000, however, the area has added a significant amount of gas-fired capacity as tightening environmental regulations have forced the shutdown of much of its coal capacity and skyrocketing oil prices have made oil-fired generation unprofitable except in situations of extreme demand. The result has been a shift from a balanced portfolio to one dominated by gas: The New England Independent System Operator (ISO-NE) region now gets more than 50% of its electricity from gas.

But pipeline capacity into New England has lagged well behind the shift in generation, causing serious constraints during periods of high demand in the winter and summer. This past winter, during January and February, ISO-NE faced repeated episodes of gas-fired plants being unable to respond to startup orders because of a lack of fuel. The situation has become severe enough that ISO-NE has warned that long-term reliability is at risk unless the gas supply bottlenecks can be addressed.

This makes the Everett terminal a critical resource for New England even as the rest of the nation ponders exporting its excess gas. For Everett’s customers, an excess of gas is a fantasy for the future.

GAS POWER toured the Everett facility in June during the LDC-Northeast Gas Forum. Though the terminal is now past its 40th birthday, DOMAC has invested millions of dollars in keeping its technology up to date. A modern control room filled with an array of flat-screen monitors allows a handful of operators to safely control the entire facility (Figure 1). 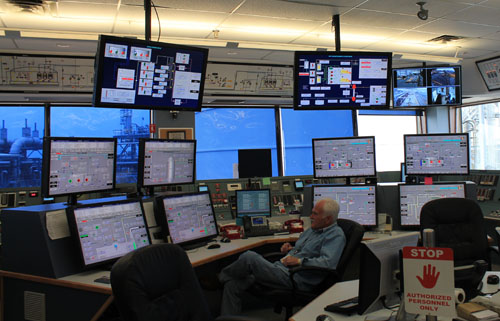 1. From the control room, operators can monitor operations across the entire facility. Source: Tom Overton/POWER

According to Everett Process Engineer Jonathan Bernblum, the terminal has multiple layers of redundancy to ensure it can continue supplying its customers even when things go down.

“The key here is that even though we have a lot of capacity,” he said, “it’s not so much capacity that’s required as much as reliability.” Should the Everett terminal ever have to shut down completely, it would cause serious repercussions throughout the area.

The LNG comes primarily from Trinidad and Tobago, though Everett has recently received shipments from Yemen. The two large LNG storage tanks (Figure 2) are capable of holding up to 3.4 Bcf of LNG, which is a bit more than the typical shipload of 3 Bcf. 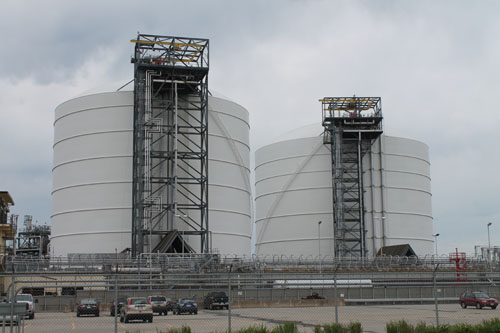 The LNG is held in the tanks at near atmospheric pressure and is kept in liquid form purely through refrigeration. Temperatures are maintained primarily through vaporizing the gas, as the process of boiling off the LNG draws enough heat to keep the rest liquid (Figure 3). 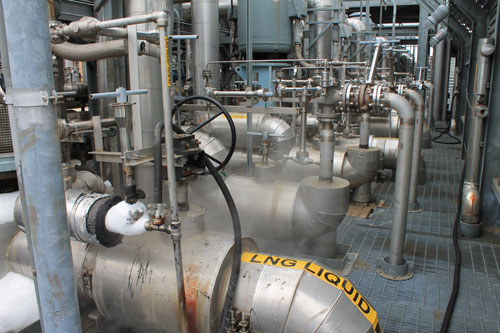 The terminal has a peak send-out rate of 1 Bcf/d, with a sustained capacity of 715 Mcf/d. DOMAC’s customers include local gas distribution companies (LDCs), gas-fired power plants, gas marketers, and industrial end users. Customers may contract for daily, weekly, seasonal, annual, or multi-year service. Everett can supply its customers with both LNG and vaporized gas. Vaporized gas is delivered to the Algonquin and Tennessee interstate pipeline systems as well as Boston’s LDC, Boston Gas Co.

The facility also has four LNG truck loading bays that supply more than 40 local LNG storage tanks around New England. It can send out up to 100 Mcf of LNG via truck shipments a day. DOMAC also recently added an LNG fueling station where LNG-powered commercial vehicles can refuel. 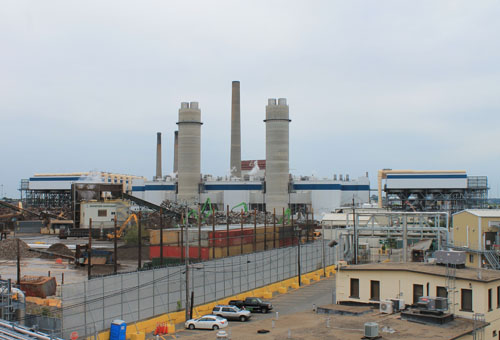 4. The Mystic Generating Station, seen here from the Everett control tower, is totally dependent on Everett for its gas. Units 8 and 9 are in the foreground, with the tall stack behind them serving Unit 7. Source: Tom Overton/POWER

The Mystic plant is primarily gas-fired (it has some dual-fuel capacity), and in an interesting and unusual arrangement, the Everett terminal is the plant’s only source of gas. The gas is procured under long-term contract through 2027, meaning the plant operates under very different economics from others in the area. While it is insulated from the seasonal gas price spikes that have plagued ISO-NE for decades, it is also completely dependent on LNG deliveries to Everett. Last year, when unrest in Yemen disrupted LNG exports, authorities had to scramble for contingency plans in case the plant was forced to shut down due to a lack of fuel.

Units 8 and 9, the combined cycle units, are Boston’s most important generating resource, and typically see annual capacity factors around 60%. During high demand in the summer and winter, or during periods of high power prices, they may run at full power almost continuously.

Despite Everett’s key role in the region, its attractiveness as an LNG destination has faded in recent years. Between 1971 and 2003, Everett received about half of the total LNG imported into the U.S. Since opening, it has received more than 1,000 LNG shipments, and as recently as 2009, Everett saw about 60 ships a year, receiving more than 183 Bcf.

But as natural gas prices in the U.S. have plummeted, volumes have fallen, and 2011 saw only 135 Bcf come through Everett. LNG spot prices in the Atlantic basin during the winter of 2012–13 ranged from around $10/MMBtu to $12/MMBtu, well above hub prices in the U.S. For most of the year, only LNG purchased under long-term contract comes to Everett.

Vince Morrissette, vice president of origination and regulatory affairs for Repsol, who spoke at the LDC-Northeast forum, addressed the conundrum Everett and the New England region have found themselves in.

“The average cost of LNG in the Atlantic Basin is currently higher than the average market price of natural gas in New England,” he said, “and this should persist for the foreseeable future.”

New England needs to alleviate its gas supply bottlenecks, but it is those very bottlenecks that can still pull spot LNG into the terminal. In February of this year, for example, the gas crunch that sent average prices at the Algonquin Citygate shooting above $15/MMBtu also made the region an attractive market for LNG.

Thus, he said, “During periods of peak demand, market prices in the New England region can be high enough to attract LNG imports.”

With new pipeline projects into New England still years away, the Everett terminal is certain to remain a critical resource, even as the rest of the nation ponders what to do with its surge of gas.