Denmark in September inaugurated a 209-MW offshore wind park — the world’s largest to date — off the west coast of Jutland, in the North Sea. Owned 60% by Vattenfall and 40% by DONG Energy, construction of the massive Horns Rev 2 project — consisting of 91 Siemens 2.3-MW turbines (Figure 6) — began in early 2008 as the second phase of the Horns Rev project. The first phase, the 160-MW Horns Rev 1, which uses 80 Vestas 2-MW turbines, began feeding the Danish electricity grid in 2002. It was the first offshore wind farm built in the North Sea. 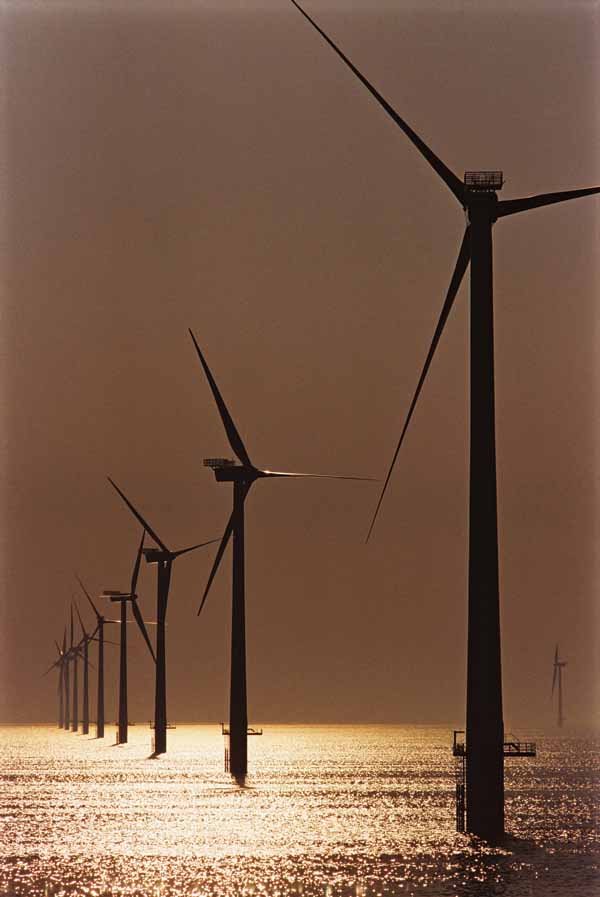 6.    Treading water. Denmark inaugurated the world’s largest offshore project to date this September. But the 91-turbine, 209-MW Horns Rev 2 wind park—built in just 18 months off the west coast of Jutland on the North Sea—could soon be overtaken in size and installed capacity by several planned wind farms, including British projects like the 140-turbine Greater Gabbard and the 340-turbine London Array. Courtesy: Vestas Central Europe

The size of the Horns Rev 2 park is reportedly so vast that it features the world’s first offshore wind farm equipped with a platform where maintenance personnel can spend the night. It is expected to produce more than 800 GWh of electricity annually, making Denmark — a country that already receives about a fifth of its electricity from wind power — the worldwide leader of installed offshore wind capacity.

The nation had lost that title to the UK last year after Centrica opened the 194-MW Lynn and Inner Dowsing wind farms off the coast of Skegness, in Lincolnshire. Though Danish Minister for Climate and Energy Connie Hedegaard said at the inauguration that Denmark would triple its capacity of offshore wind power over the next four year, the nation will continue to vie for the title with the UK, as several planned projects could overtake the Horns Rev 2 project both in size and installed capacity.

In the works are the UK’s Greater Gabbard field — a 140-turbine wind farm expected to come online next year. After that it will be 340 turbines on the London Array. DONG Energy, a partner in that project, along with Germany’s E.ON and Abu Dhabi – based Masdar, also plans to separately build a 102-turbine, 367-MW wind farm in the Irish Sea.

And European ambitions concerning new offshore capacity are only set to get larger. The European Wind Energy Association (EWEA) increased its 2020 target to 230 GW of installed wind power capacity — including 40 GW that would be offshore wind. Saying that the task would be "challenging but manageable," the industry group set out a 20-year plan in a European Union – backed report released this September.

"An entire new offshore wind power industry and a new supply chain must be developed on a scale that will match that of the North Sea oil and gas endeavour," it said in the report, titled, "Oceans of Opportunity." To reach the 40-GW target by 2020 would require an average growth in annual installation of 28% — from 366 MW in 2008 to 6,900 MW in 2020, EWEA acknowledged. But, it pointed out, in the 12-year period from 1992 to 2004, the market for onshore wind capacity in the EU grew by an average 32% annually, from 215 MW to 5,749 MW. "There is nothing to suggest that this historic onshore wind development cannot be repeated at sea," it said.

The 20-year plan calls for construction of a transnational offshore power grid. That network would build on 11 grids already in place and incorporate the 21 being studied by grid operators in the North and Baltic Seas. EWEA also proposed that eight additional offshore grids be built by 2020 and six more by 2030. The group’s plan was made public as the European Commission gears up to publish a blueprint for a North Sea grid and European electricity network operators develop a 10-year plan for a unified European grid.