Southern California Edison (SCE, Rosemead, Calif.) closed the 1,580-MW coal-fired Mohave Generating Station in Laughlin, Nev., on December 31. In a filing with the California Public Utilities Commission (CPUC), SCE said it expects the plant to remain off-line for four years—the time it will take for the utility and the plant’s other owners to battle environmental groups over the plant’s pollutant emissions and to negotiate with two native tribes over rights to the water needed to deliver fuel to Mohave as a slurry. The shutdown concerns many in the Southwest, because Mohave (Figure 1) was a key source of electricity for Arizona, Nevada, and Southern California. The plant and the coal mine that supplied it also provided jobs for the Hopi and Navajo nations, whose unemployment rates exceed 50%. 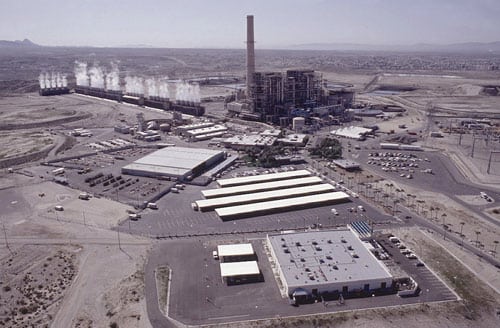 1. First air, now water. Owners of the 1,580-MW Mohave coal-fired power plant in Nevada shut it down one day before violating a seven-year-old court order to reduce the plant’s air pollution. It may remain off-line for years unless a new source of water for its slurried-coal fuel is found. Courtesy: Southern California Edison

The two-unit plant, which has twin tangentially fired, once-through supercritical boilers from Combustion Engineering (now part of Alstom), was an engineering marvel when it was commissioned in 1971. But environmentalists have long blamed the plant, which lacks modern pollution-control systems, for contributing to the haze that has become more pronounced in the Grand Canyon, 75 miles away.

SCE and its partners—Phoenix-based Salt River Project, Las Vegas–based Nevada Power Co., and the Los Angeles Department of Water and Power—dispute that claim, saying that Mohave has "consistently operated in compliance with all applicable state and federal environmental standards." Although the Nevada Department of Environmental Protection agrees with that statement, a coalition of environmental groups charges that the plant "violated its pollution limits over 400,000 times between 1993 and 1998," one year before the signing of a consent decree that mandated Mohave’s cleanup by December 31, 2005.

The 1999 court order called on Mohave’s owners to do the following:

Unable to comply for a variety of reasons, the owners were left with no choice: shut Mohave down or break the law. The plant’s water supply is another bone of contention that contributed to the decision. The Hopi and Navajo have asked St. Louis–based Peabody Energy—the owner of the Black Mesa Mine in Arizona, where low-sulfur, subbituminous coal is mined, slurried, and then piped 273 miles to Mohave—to stop using an aquifer on tribal land for the water for the slurry. Were Peabody to comply with this request, the security of the plant’s fuel supply would be in doubt.

For SCE, this created a Catch-22. As a regulated utility, it must seek the CPUC’s approval for any capital investments it makes in Mohave. But until a replacement source of slurry water is found, the commission would be unlikely to approve spending on any upgrades of Mohave. SCE’s share of the expenses would be underwritten by California ratepayers, who also would shoulder the upgrade projects’ financial risk. That risk would be considerable. SCE says that the new emissions-control systems and burners needed to comply with the consent decree, as well as a new coal/water supply and delivery system, might cost as much as $1.1 billion to buy and install.

Even shutting down Mohave has created another hurdle for SCE and its partners. The environmental groups and some Hopi and Navajo (although not the tribal leadership) want the owners to donate the proceeds of the sale of pollution credits produced by the plant’s closing to selected environmental projects. Although that’s certainly a novel idea, SCE and its partners say that those revenues belong to their customers and call the request to pass them on to others "unprecedented and inappropriate." They say that having met all their contractual commitments to the tribes, further discussion of the subject is off the table.