The challenge of getting a new generation of workers interested in the power sector is one I hear about frequently. Too many young adults are more fascinated by the tech sector, plant folks say. That may be true, but I don’t blame ambitious youth for being attracted to fields that are pushing frontiers. However, I do empathize with the traditional power industry, struggling to attract well-qualified staff. I keep looking for brilliant new strategies to share with readers, but I keep hearing the same old ideas.

When it comes to training for the power industry, there are both traditional and nontraditional (especially online) options. But first, potential employees need to be interested in exploring them. Parents and counselors may encourage a career in power or the related trades by making the argument that these careers can be financially rewarding. Another familiar approach that POWER has covered frequently is recruiting from the ranks of former military service men and women. These tactics are important, but the continued comments about workforce concerns indicate that they may no longer be sufficient.

Even if they ignore the lure of tech company stock options, Millennials interested in engineering fields may pass on older forms of generation in favor of newer technologies. Aside from the inherent appeal that renewable energy has for many entering the workforce, renewables are more accessible than fossil and nuclear plants. From wind and solar plants visible from roads across the country, to solar demonstration projects at local fairs, to rooftop solar panels, anyone with the slightest interest in renewable power can get close to the actual generating technology. The same isn’t true for thermal plants, even though some fossil plants do host tours for students. One way around this problem might be to make conventional generation accessible virtually.

From Comics to Apps

When nuclear power was new, it generated a plethora of pop culture expressions, including comic books like the 1948 one shown here, published by General Electric and included in Albuquerque’s National Museum of Nuclear Science & History. The display explains, “This comic book tells the reader about the potential benefits of nuclear power.” Two observations about this bit of history: First, nuclear power became part of popular culture not just because it promised that nuclear energy’s destructive force could be redirected to peaceful ends but also because it was startlingly new. Second, information about nuclear power was woven into accessible daily experiences—like reading a comic book. 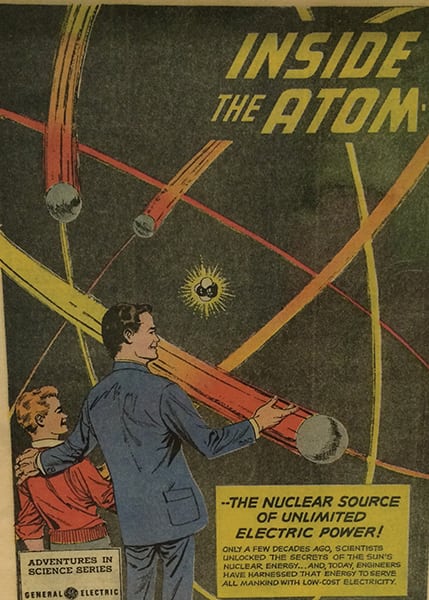 I don’t have any evidence of this, but I doubt there were comic books celebrating coal-fired power generation, even in 1948. There is, however, a currently available board game for ages 12 and up called Power Grid that purports to teach players about the industry: “The object of the game is to supply the most cities with power.” Players acquire fuel and manage plant upgrades. This is not an endorsement of the game (which I haven’t purchased or played—hat tip to Associate Editor Sonal Patel for bringing it to my attention), and the box’s seriously dated image of a guy in a lab coat at an analog control panel doesn’t exactly send the message that power generation is cool.

Nevertheless, the idea of gaming holds promise, even though I haven’t been able to find a 21st century video gaming version of this concept that includes all fuels and isn’t sponsored by a vendor or lobbying group. (Startup idea!) Like a Tesla car, the cloud-based video game could update wirelessly every time a player starts a session, adjusting technology options, fuel costs, and operating constraints. The closest to a power system video game I’ve heard of is ConEd’s mobile app “Heroes,” with a story called “Gassed,” designed to teach all ages about gas safety. ConEd promoted its partnership with DC Comics in developing the app this fall.

Time to Turn a Corner

I visited California’s Bodie State Historic Park (which I do endorse) on vacation this summer. This massive ghost town offers a glimpse (literally) into the homes and businesses that were left behind when gold mining dried up at the site. Today, the park is enormously popular with visitors of all ages from around the world. (See the online version of this column at powermag.com for photos of the power infrastructure.) Bodie was a progressive operation for its time and by 1892 included a substation for hydropower that was generated 13 miles away. The visitors’ guide erroneously claims that the original poles and lines “were installed in a straight line as it was feared the electricity would not be able to turn corners.” (The real reason, of course, was that the shortest distance, and least voltage loss, was along a mostly straight path.)

What myths about building a workforce does the power industry still subscribe to? What corners hasn’t it turned? Many of the most in-demand job titles didn’t exist even five years ago, which means the competition has changed.

Can you imagine a company developing a 20- or (more likely) 10-year career path for job candidates that would start at a fossil plant but plot a course toward future positions in renewables or carbon capture or electric vehicles or robotics? Yes, such approaches would take generators out of their comfort zone, but is that scarier than the future they’re already facing? Share your company’s best practices or promising ideas in the online comments below this column at powermag.com. ■