If you’re a power sector professional and you haven’t thought much about energy storage, rest assured—you will soon.

At least, that’s if the numerous companies working in this field and presenting at the Energy Storage North America (ESNA) conference in San Jose, Calif., this week get their way. But, as Craig Horne, chief strategy officer and co-founder of Sunnyvale, Calif.–based Enervault told POWER, just getting people to think about storage as an option is half the battle.

Enervault has developed a grid-scale iron-chromium redox flow battery that went online in a demonstration pilot project near Turlock, Calif., in July. That 250-kW, 1-MWh facility (Figure 1) is only the first step in what could potentially be 100-MWh-and-up applications, Horne said. The key advantage is that the technology scales very economically: The larger the storage capacity, the cheaper each kWh of capacity gets. That’s a partly function of its inexpensive, non-toxic Fe-Cr electrolyte, and partly a reflection of its modular design. 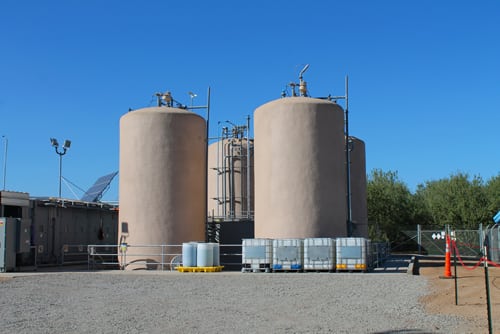 While Fe-Cr-based redox flow batteries have had challenges in the past, Enervault believes it has overcome them, CEO Jim Pape said during a pre-conference field trip to the Turlock site. Enervault plans to have three grid-scale projects in operation by 2016, with capacities up to 30 MWh. Even larger 100-MWh projects could come in a few years.

The flexibility and scalability of flow batteries has quite a few companies working on competing designs. Primus Power showcased their zinc-bromine-based design during the same field trip. The technology is centered around individual 72-kWh energy cells, which can be combined to scale up capacity as needed. Though Primus offers a 240-kW, 720-kWh containerized unit (called a EnergyPod), it views the energy cells as its primary product given their flexibility, Andrew Marshall, director of product management told POWER.

Unlike traditional redox-flow designs, Primus uses metal electrodes, with a single-tank, single-loop electrolyte flow without a membrane. This creates a more rugged, durable product that can last up to 20 years, Jonathan Hall, Primus vice-president of engineering said.

High-tech batteries aren’t the only storage method being developed, however. Redwood City, Calif.–based Terrajoule is reaching back to a very old technology—steam engines—to produce a simple, rugged, yet flexible storage method based on nothing more complicated than steam and hot water. The Terrajoule process takes steam generated by a parabolic-trough concentrating solar power plant and uses it to drive a high-pressure steam engine (Figure 2). The engine exhaust is fed to a 30,000-gallon storage tank and condensed into pressurized hot water, storing excess energy while the sun is shining. When the stored energy is needed, the hot water is converted back into steam and used to drive a pair of low-pressure steam engines. 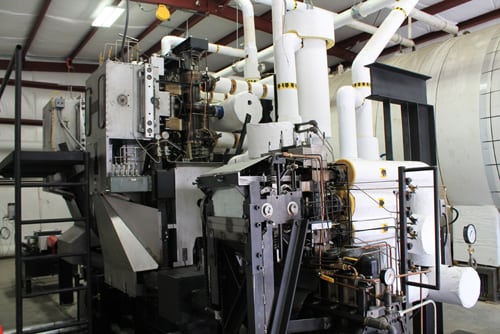 As Robert Mierisch, Terrajoule’s CTO explained, the steam engine manufacturing sector has all but disappeared, meaning Terrajoule had to research patents and engineering diagrams from the 1930s to develop its proprietary technology. “No one manufactures these kinds of engines anymore,” he said. Why use steam engines at all? It’s because the storage system creates fluctuating steam pressures that won’t work with a turbine. The basic design has a capacity of 1.5 MWh, but is potentially scalable to much more.

This surging development is being driven in part by new mandates for energy storage capacity. California recently enacted a requirement for its utilities to source 1.3 GW of storage services by 2020. That was a move that multiple manufacturers at ESNA described to POWER as a game-changer.

Making it work though, is going to be a challenge, as two California regulators explained.

Heather Sanders, director of regulatory affairs with the California Independent System Operator (CAISO) told attendees that CAISO is dealing with a “large influx” of storage project proposals—more than 2.1 GW, three times as much capacity as is required by the first phase of the mandate.

Carla Peterman, a commissioner with California Public Utilities Commission (CPUC) reported that the CPUC is having to answer a lot of questions about eligibility and specific details of the mandate. She said there remains a lot of work to be done, requiring close cooperation between all involved agencies and stakeholders.

“We have to come back to what it adds to the system,” Sanders said.

Ontario is also seeking to support grid-scale storage, but has taken a different route from California. As Kim Warren, COO of Ontario’s Independent Electricity System Operator and JoAnne Butler, vice president of electricity resources for Ontario Power Authority, explained, its target is smaller—50 MW—but it is more varied. It includes the first power-to-gas project in North America, to be deployed by Hydrogenics, which inaugurated a similar project in Germany last year.

“Storage is a natural addition” for Ontario, which has made a rapid shift away from coal and toward renewables over the past decade, Warren said.

Final bid selection is set for the second quarter of 2015. Warren said Ontario is actively working on planning and grid analyses to support rollout of these storage projects.

World renewables leader Germany is not sitting still on storage either. Frank-Michael Baumann, CEO of EnergyAgency North Rhine-Westphalia, reported that much of Germany’s need to deploy storage in the short term is driven by its plan to phase out nuclear by 2022. “The dominant energy source for Germany in the future will be wind,” he said, which means a rapidly growing need to balance intermittent output.

Heiko Staubitz, senior manager, smart grid and energy storage for Germany Trade and Invest, reviewed the state of the German energy market. Based on current costs and capacity payments for battery storage, capital expenditures would need to be no more than €1,100/kWh.

One of the challenges in Germany is the rapid growth of distributed, customer-sited generation that is outside the control of the large utilities. While it is a “more democratic” approach, Baumann said, “there is some resistance from established stakeholders.” Storage in Germany is likely to grow along similar lines, he said.

A group from the Rocky Mountain Institute (RMI) addressed challenges in boosting market adoption of energy storage. Hervé Touati, RMI managing director, pointed out that the current business case for battery storage systems in California doesn’t generate enough revenue from peak vs. off-peak power arbitrage, even with the Self-Generation Incentive Program subsidies. That means bringing capital costs down and finding new ways to generate revenue. Fortunately, the opportunities for both are large, he said.

Doing so will require creativity on the business side, however, and effectively communicating the types of services storage can provide. RMI is working on an initiative to support more efficient and cost-effective storage deployment.