In a sobering assessment of a key technology that’s expected to help keep the coal industry viable in the face of likely greenhouse gas caps, several electric utility executives have expressed deep concern that the promise of carbon capture and storage for coal-fired power plants has been “overblown” and “oversold.”

“I think carbon capture and storage as a magical technology that solves the carbon problem for coal plants has been oversold,” said Duke Energy Chairman, President, and Chief Executive Officer Jim Rogers at the annual conference of the Edison Electric Institute (EEI), the trade group for U.S. investor-owned electric utilities.

Rogers’ view was echoed by EEI’s outgoing and incoming chairmen at a press conference featuring the three utility chiefs.

The executives’ comments are surprising in that each runs a utility that burns large amounts of coal, and carbon capture and storage (CCS) is seen as the primary hope for ensuring a strong future for coal, by far the most abundant fossil fuel resource in the U.S.

However, their comments are not surprising in that EEI and other electric utilities have strenuously warned Congress about requiring significant cuts in carbon dioxide (CO2) emissions before CCS is technologically mature and ready for large-scale deployment. By playing up the uncertainties of CCS, the industry execs are attempting to back up their assertions that Congress must wait at least 10 years on big emissions cuts so CCS technology can come of age (see sidebar).

The legislation, heartily endorsed by senior officials from the electric power and coal mining industry and the United Mineworkers of America, would authorize the nation’s distribution utilities to conduct a referendum on establishing a private carbon storage research corporation, which would be automatically created if the referendum is approved by distribution utilities representing two-thirds of the retail electricity sold in the United States.

The corporation would be operated as a division or affiliate of the Electric Power Research Institute (EPRI) and be managed by a 12-member board composed of EPRI-appointed representatives of coal producers and investor-owned, municipal and rural electric cooperative utilities.

The legislation further authorizes the corporation to assess fees on distribution utilities for all fossil-fired electricity, reflecting the relative carbon dioxide emission rates of coal, natural gas, and oil. The total assessment will be $1 billion per year, an amount Boucher  said would increase national average residential electricity rates by $10 to $12 per year.

The corporation must distribute the funds each year through grants and contracts to private, academic, and governmental entities to accelerate the commercial availability of carbon capture and storage technology. The legislation requires supported projects to encompass a range of different fuel varieties, be geographically diverse, involve diverse CO2 storage media and employ technologies suitable for new or retrofit applications.

Boucher, who is working with House Energy and Commerce Committee Chairman John Dingell (D-Mich.) to draft climate change legislation, said in a statement that the broad availability of CCS technology is crucial to the continued use of coal for electricity generation in a carbon-constrained regulatory environment.

“Coal is America’s most abundant domestic fuel, and today, coal accounts for more than one-half of the fuel used for electricity generation,” Boucher said. “Given our large coal reserves, its lower cost in comparison with other fuels, and the inadequate availability of fuel alternatives, preservation of the ability of electric utilities to continue coal use is essential.”

The legislation has 14 cosponsors, most from states with strong coal mining activity. Three Republicans are cosponsoring the bill, including Rep. Joe Barton (Texas), the senior GOP member of Dingell’s committee.

But environmentalists and many climate scientists say that substantial CO2 cuts are needed soon to avert the worst impacts of global warming.

CCS technology would allow for continued use of coal by stripping CO2 out of coal plant emissions and pumping it into underground caverns or reservoirs for storage (Figure 1). 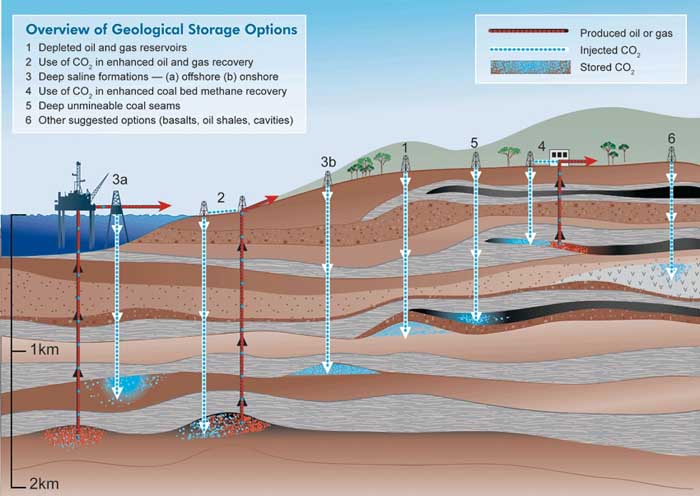 However, in comments to reporters, outgoing EEI Chairman Jeffrey Sterba, chairman, president, and CEO of Albuquerque-based PNM Resources, said: “Carbon capture and storage as a cure-all has been way overblown. It’s a technology that the scientists I have spoken with are comfortable can work; but is it deployable in the next 10 years? . . . No.”

Incoming EEI Chairman David Ratcliffe, the chairman, president, and CEO of Atlanta-based Southern Company, presented the same message in slightly different form, saying: “We have undersold how complex it is.”

Ratcliffe—whose utility is one of the nation’s biggest coal burners and strongest opponents of climate change legislation—stressed that the sheer size of the infrastructure needed to deploy sufficient CCS is a major challenge.

“You cannot deny the fact that we are capturing CO2 and using it in enhanced oil recovery,” Ratcliffe said. “But the problem is that is on such a small scale compared to what we are talking about doing. . . . To extrapolate that . . . to a reasonable application in this [electricity] industry is crazy.”

All three executives made clear that they strongly support coal and CCS technology, and Ratcliffe specifically said that pushing Congress to direct adequate funds for research on CCS and other emission-reducing energy technologies will be a key goal of his tenure at EEI.

But the executives suggested that CCS will not be practicable as early as some policymakers think, and that utilities and policymakers need to keep a range of options open for generating low-carbon electricity.

Ratcliffe said he was not “criticizing one technology over another—we should be exploring and try to move forward on all available technology.”

However, if a bill is passed that relies too heavily on early deployment of CCS, Sterba said, “we will be in a position of perhaps shutting down coal plants. . . . That is not going to be good for the country.”

Ratcliffe added: “You can legislate all you want, but it [CCS] is not going to be there,” in five years.

On another key climate change issue, Ratcliffe said it was “desirable but not essential” for EEI members to agree on how any free emission allowances ought to be allocated to utilities under the cap-and-trade greenhouse gas plans being considered by Congress.

The allowance allocation issue has emerged as a sharp point of contention between coal-burning utilities—which believe the credits should be allocated based on historical emissions to ease the transition to cleaner electricity—and utilities that rely heavily on nuclear power and other low-emission power sources. The latter, along with environmentalists, say most allowances should be auctioned off by the government. The cleaner utilities say giving coal-burning utilities a large number of free credits would amount to rewarding polluters and penalizing utilities that already have spent money to reduce their greenhouse emissions.

Sterba suggested the allowance allocation issue was not as divisive for the industry as it seems, saying: “We are more together on this issue than we are apart.” However, he added that even without consensus on allocations, EEI can “continue to inform the policy community” with analysis, data and utility views on other features of the climate change debate.