Substantial changes in the outlook for energy markets over the past couple of years, including evolving environmental regulations, continued economic weakness and commodity market developments, have created significant headwinds for coal generators, leading to a large number of planned or already completed coal unit retirements. While many retirement plans have already been unveiled, additional shutdowns of coal-fired generating units are likely, according to a new analysis by SNL Energy.

Coal generators have been hit with a dual blow of challenging economics and new environmental regulations that are expected to lead to additional generator retirements, according to a new white paper from SNL Energy. The white paper, titled, "Coal Plants at Risk: Factors Affecting Retrofit or Retirement Decisions," focuses on the current challenges facing coal generators and estimates potential at-risk retirements in the face of the U.S. EPA’s upcoming Mercury and Air Toxics Standards, or MATS, as well as likely retrofits to comply with the new rules.

MATS could drive an additional 17 GW of coal retirements in the coming years, though risk to the upside and downside exists, according to the report.

A review of coal retirement announcements over the past couple of years makes it clear that upcoming environmental regulations are a major driving factor behind retirement decisions. Rules such as MATS are already largely shaped, but several other regulations, including EPA rules on water intake standards, regional haze and coal ash disposal, are still evolving, making future retirement decisions more difficult.

MATS, finalized by the EPA in December 2011, is widely regarded to be the most onerous among the federal environmental rules on the table for coal generators and is the focus of the SNL Energy analysis. At the heart of MATS are limitations on emissions of heavy metals including arsenic, chromium, mercury and nickel and acid gases.

Through its regulation of acid gases, particulate and mercury, MATS may in some cases require installation of a full suite of new emissions controls while in other instances only relatively minor upgrades may be needed. Compliance options for MATS vary widely, with some units able to employ relatively less expensive technologies such as dry sorbent injection and activated carbon injection, while others may require more costly retrofits such as dry scrubbers and fabric filters.

MATS has had a significant impact so far on announced generator retirements with a number of companies citing the rule as the key driver behind the decision to retire. Some high-profile examples of this occurred in 2012 when FirstEnergy Corp. announced the early retirement of 14 coal-fired units in Ohio, Pennsylvania and Maryland citing MATS as a major factor for retirement of the units.

Though MATS may be the primary regulatory driver for coal retirement decisions, a number of other rules are still shrouded in uncertainty and have the potential to impact coal generators.

This list includes the EPA’s Cross-State Air Pollution Rule, which was struck down in August 2012 by the U.S. Court of Appeals for the District of Columbia Circuit. On Jan. 24, the EPA’s request to reconsider the district court’s decision was also rejected, leaving the less stringent Clean Air Interstate Rule in place. This has created some uncertainty as to whether the EPA will try again with CSAPR, when this might happen and what a reworked rule could look like. CSAPR becomes important through its ability to impact the particular choice of configuration for acid gas control as well as the potential requirement for additional control of NOx that is not directly regulated under MATS.

Perhaps more importantly, the stay of CSAPR effectively vacates an EPA agreement whereby CSAPR could be used to satisfy compliance with the Regional Haze rule in participating states. As a technology based standard, versus cap-and-trade under CSAPR, the Regional Haze rule may leave generators with less flexibility and potentially increased compliance costs which may place additional pressure on coal units to retire.

A number of other rules are likely to be finalized in the coming years which could further impact coal retirement decisions. This includes 316(b), or the cooling water intake structures rule, which will tighten standards on cooling structures to minimize the impact of water withdrawals and discharges. The EPA has also released proposals for new wastewater effluent guidelines dictating how potentially toxic wastewater should be disposed of and new coal ash handling rules are also in the works.

While upcoming environmental regulations are significant driving factors behind announced coal retirements, market forces have had an important role to play. Coal generators have faced adverse market conditions in recent years, including increased competition from the combined-cycle gas turbine, or CCGT, fleet, depressed wholesale power prices, weak demand growth and oversupplied power markets as well as pressure on the delivered cost of coal. In some cases this has made it difficult for generators just to cover fixed costs leaving little margin for undertaking capital-intensive retrofit projects.

One of the most challenging elements for coal generators has been persistently low natural gas prices. The impact of shale gas on natural gas prices has resulted in a fundamental long-term shift in the outlook for the resource which threatens to keep pressure on some generators in the coming years.

Figure 1 shows the NYMEX Henry Hub natural gas futures curve through 2020 across several recent trade dates. The curve as of the beginning of 2011 reflected prices of more than $5.00/MMBtu for April 2013, rising to $6.84/MMBtu by the end of 2020. A comparable curve pulled at the end of February 2013 shows prices spanning from about $3.50/MMBtu for April to just over $5.50/MMBtu at the end of 2020. The downward shift in the forward curves is especially wide in early years, and while it tightens somewhat going into 2020, the effect is persistent. 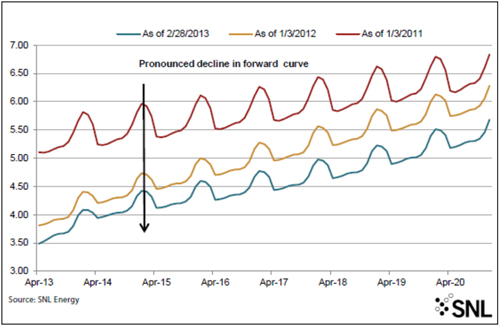 Low natural gas prices threaten to keep pressure on some eastern U.S. coal generators going into the next decade despite an overall easing of coal-to-gas switching compared to the highs of 2012. A look at the economics of coal generators for 2013 would suggest that this effect might persist for some time, particularly for the least efficient plants burning Appalachian coal. Figure 2 captures some of the results from a recent coal-to-gas switching analysis by SNL Energy and shows U.S. coal generating capacity versus the respective coal-to-gas parity cost of that capacity organized by the primary type of coal burned. 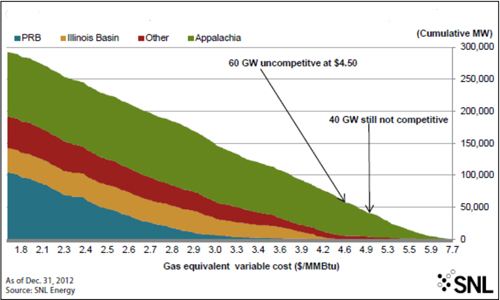 This data suggests that 60 GW of the coal fleet would still be uncompetitive versus a typical 7,500 Btu/kWh CCGT plant at $4.50/MMBtu gas, and 40 GW would still not be competitive at $5.00/MMBtu gas prices. Based on the Feb. 28 NYMEX Henry Hub forward curve, prices do not reach $4.50/MMBtu until the end of 2015 and fail to reach $5.00/MMBtu until the end of 2018. This suggests that the coal-to-gas switching phenomenon may be persistent for some of the least efficient of the Appalachian coal burning fleet.

Low natural gas prices have not only impacted coal utilization, but also the wholesale prices received by coal generators. This pressure on revenues has been met with challenges on the cost side as well. The weak coal market in 2012, which led to a collapse in coal prices in the spring, has muted the underlying fundamentals for Appalachian coals; principally that production costs have been rising and the region is in a state of productive decline. This will again be apparent as a recovery in natural gas prices over the next two years will allow coal inventories to be drawn down allowing a recovery in coal market prices.

Coal generators have also seen a rise in coal transportation costs, 40% nominally between 2001 and 2010, according to a 2012 study by the U.S. Energy Information Administration. Looking forward, continued elevated diesel prices should keep pressure on railroad fuel surcharges over the next few years. While contracted rail rates are not expected to see the kind of sharp increases experienced through the mid-2000s, there is also little expectation for significant declines in contracted rates.

SNL Energy examined the nation’s coal generating units to determine potential retrofits needed for upcoming MATS compliance as well the capacity that might be at risk of retirement due to the rules based on the economics of installing needed controls.

As part of this analysis, SNL Energy identified nearly 42,000 MW of coal capacity that has already been announced to retire or convert to alternative fuels. This includes both firm retirement plans tracked by SNL Energy as well as plans for conversion to alternate fuel sources identified through primary research.

SNL Energy’s analysis of potential at-risk retirements involved a detailed process for determining needed unit-specific retrofits for MATS compliance as well as the likely capital, fixed, variable and capacity-penalty costs of those retrofits. Once retrofit needs were determined, an economic analysis was conducted for each unit to determine whether the cost of needed emissions controls could be justified based on the estimated future net revenue streams of the unit. For both merchant and regulated units, revenues were based on estimated wholesale electricity prices derived from spreads to associated forward power hubs. Units with negative net present value were flagged as potentially at risk for retirement.

Including already announced coal retirement and fuel conversion plans, SNL Energy found a range of potential coal retirements spanning from 51,309 MW with a $1.00/MMBtu rise in natural gas prices to just over 69,000 MW in the case where the natural gas forward curve shifts downward by 50 cents/MMBtu and generators must install at least a selective noncatalytic reduction system, or SNCR, for NOx removal.

Under SNL Energy’s base case the Midwest Independent Transmission System Operator Inc. was found to have the most capacity at risk of retiring at 4,872 MW, bringing total capacity retiring through 2021 in the region to nearly 9,000 MW. At-risk retirements in MISO were sensitive to conditions modeled with potential retirements expanding by roughly 3,000 MW under the scenario which included a 50 cents/MMBtu decrease in natural gas prices and the additional requirement of an SNCR (Figure 3). 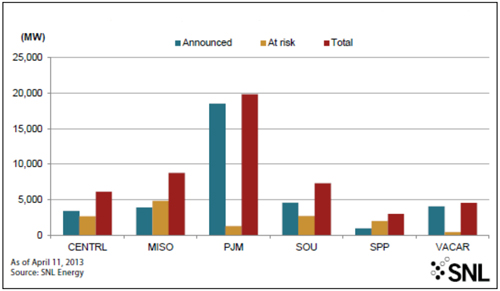 Other regions with significant at-risk retirements under SNL Energy’s base case include the SOU and Central NERC subregions each with about 2,700 MW as well as the Southwest Power Pool with just over 2000 MW. PJM, which has already seen nearly 19,000 MW of announced coal retirements/conversions, was found to have only 1,325 MW of at-risk retirements under SNL Energy’s base case which expands by roughly 1,600 MW with a 50 cents/MMBtu drop in natural gas prices. This might be an indication that the majority of the impact from regulatory and economic factors on retirements has already been absorbed in the region.

—Jesse Gilbert is a senior industry analyst with SNL. This article was previously published on the SNL web site. It is reprinted with permission, with minor edits for style.