Despite hostilities that linger as a result of the 1986 nuclear nightmare at Chernobyl, Ukraine, and pressure from the European Union to shut down older-generation plants, Eastern European countries from the Baltic to Bulgaria are renovating existing nuclear plants or building new ones. If these projects become reality, the region will be able to secure its power supplies as well as cover the ongoing shortages in countries such as Greece, Macedonia, and Albania.

Romania in November signed a nuclear deal to build two more reactors at its plant in Cernavoda, on the River Danube, by 2015. Work at that plant has been ongoing for 30 years. The Canadian-built plant’s first CANDU unit went online in 1996, and the second in 2007. The two new units are each expected to add 720 MW to the 1,310-MW facility. When complete, the Cernavoda, owned by a consortium of partners — GDF Suez, German power giant RWE, Czech utility CEZ, and Italy’s Enel with 9.15% each, plus Spain’s Iberdrola and a local unit of steel giant ArcelorMittal with 6.2% each — will supply 40% of Romania’s power needs.

Also in November, Slovakia inaugurated construction of two new reactors at its existing Mochovce facility that would cover 22% of the nation’s power needs after completion in 2012 and 2013 (Figure 4). The €2.8 billion project continues work begun in 1986. Slovak government officials said the 880 MW of new capacity was necessary after terms in the country’s accession agreement with the EU forced the closure of two 400-MW Soviet-built reactors. 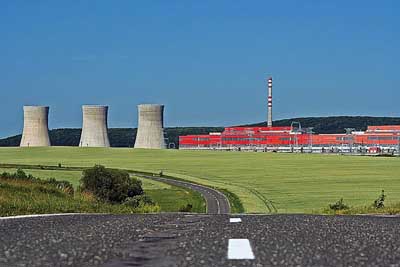 4. Slovak power. Slovakia inaugurated construction of two new reactors at its existing Mochovce facility, shown here. The new reactors are expected to cover 22% of the nation’s power needs after completion in 2012 and 2013. The new capacity is urgently needed after an EU accession agreement forced closure of two Soviet-built reactors. The country hinted it would restart one of those reactors this January, when it declared a state of emergency after Russia’s Gazprom disabled natural gas supplies to Europe. Courtesy: Slovenské Electrárne

Slovakia and Hungary were the two most hard-hit countries when Russian natural gas exporter Gazprom cut supplies to Europe because of a row between Moscow and Ukraine. The two countries import more than 60% of their gas from Russia, making up more than 40% of total energy consumption. In early January, Slovakia declared a state of emergency, and Prime Minister Robert Fico said that if gas supplies were halted for a longer time, the country would consider restarting the 440-MW unit at its older nuclear power plant, Jaslovske Bohunice, which it had shut down at the end of 2008.

Poland, a country with no existing nuclear power plants, is considering construction of at least two. The government has acknowledged it would in 2009 work toward obtaining necessary financing. The country will soon announce the first plant’s probable location, which it has said will depend on economic factors and capacities of the Polish power grid. The government confirmed in January that a private consortium had been identified, and that France had pledged its support in the plant’s development.

Lithuania, Estonia, and Latvia are also studying building a new nuclear power plant near Lithuania’s existing Ignalina nuclear plant, to be operational by 2018. As an EU accession condition, Lithuania had agreed to shut down Ignalina — the last Soviet-era, Chernobyl-type reactor facility in the EU — by January 2010. But because the plant provides about 70% of the region’s power — and despite the European Commission’s efforts to allocate billions of euros and connect the region to Western grids — the Lithuanian government said it is worried about its future electricity supply.

Meanwhile, Bulgaria’s state-owned electricity company sealed a deal with RWE in December, granting the German company a 49% stake in the Belene Nuclear Power Plant project. The 2,000-MW two-reactor plant will be built by Russian company Atomstroyexport with AREVA and Siemens as subcontractors. The project has suffered several delays; construction was originally expected to begin in mid-2009, with the first reactor operational by 2014. Government officials have said the project is critical to securing power supplies for Bulgaria and the Balkans. Bulgaria was a primary power supplier to the region until it was forced to close down four of six reactors at its only nuclear plant at Kozloduy in 2006 as a condition to joint the EU.