During and following the Cold War, it was assumed that the Soviet Union had produced weapons-grade, highly enriched uranium (HEU) from 1950 through 1988 for defense purposes. With the collapse of the USSR in the early 1990s, there was concern that this HEU—containing between 20% and 90% uranium-235 (U-235) and plutonium—could be stolen from weapons sites and end up in the wrong hands.

For perspective, the HEU in U.S. and Russian weapons and other military stockpiles totaled approximately 2,000 metric tons (MT), equivalent to approximately 12 times annual world mining production. Stockpiles of weapons-grade plutonium were reported to be 260 MT, which, if used as mixed oxide fuel (MOX) in conventional commercial nuclear reactors, would be equivalent to over one year’s worth of world production.

Beginning in 1987, the U.S. and countries of the former Soviet Union signed a series of disarmament treaties to reduce nuclear arsenals by 80%. In 1993 this collaborative effort resulted in the U.S. agreeing to purchase low-enriched uranium (LEU) from Russia that had been made from HEU extracted from dismantled Russian nuclear weapons over a 20-year period. The Megatons to Megawatts (MtM) program called for HEU to be downblended (diluted) with depleted uranium (mostly U-238), natural uranium (0.7% U-235), or partially enriched uranium to produce LEU, which is typically less than 5% U-235. The LEU then would be used as a major source of fuel for commercial nuclear power reactors.

Tangled up in BLEU

Initially, the DOE committed about 40 MT of U.S. surplus HEU to the MtM program. But because this HEU did not meet commercial specifications, it could not be converted to reactor fuel using existing industry infrastructures. To meet the goal of MtM, the DOE entered into a joint venture with Tennessee Valley Authority (TVA), which selected AREVA NP (Lynchburg, Va.) and its subcontractor, Nuclear Fuel Services (NFS, based in Erwin, Tenn.) to downblend and manufacture the uranium into fuel assemblies. To distinguish this LEU from typical commercial LEU, TVA gave it the name blended low-enriched uranium (BLEU).

Prior to any actual blending, however, the BLEU project required a reevaluation of current processing methods to produce commercial nuclear fuel. Several breakthroughs in nuclear chemistry, mechanical packaging, nuclear physics modeling, and licensing applications had to be achieved to make this unique program work safely and cost-effectively:

After working together to solve the technical, commercial, and environmental issues, interagency and contractual agreements were signed in 2001 to initiate the BLEU project. Its immediate goal was to provide nuclear fuel assemblies for Units 2 and 3 of TVA’s Browns Ferry Nuclear Plant (Figure 1) in Decatur, Ala. 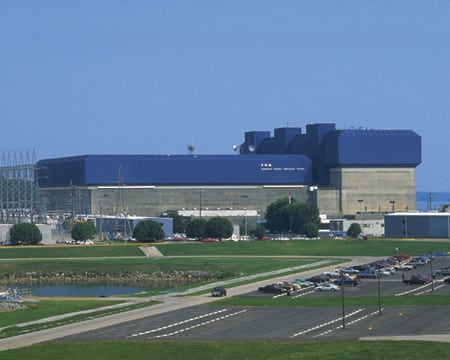 The first license amendment application associated with the BLEU project was filed by NFS to the NRC in February 2002, requesting the authority to store LEU-bearing material. Low-enriched uranyl nitrate solutions, which had already been downblended, would be shipped from DOE’s Savannah River Site in Aiken, S.C., to a new AREVA NP facility, called the Uranyl Nitrate Building, on NFS’s Erwin, Tenn., site for storage.

A second application submitted by NFS in October 2002 requested the authority to downblend HEU—in the form of aluminum alloys and metals—into low-enriched uranyl nitrate solutions at the company’s new BLEU Prep Facility (BPF). A third application submitted in 2003 asked for permission to convert low-enriched uranyl nitrate solutions to uranium oxides powder in the new AREVA NP facility and conduct associated effluent processing. The uranium oxides powder would then be shipped to AREVA NP’s Richland, Wash., plant for conversion to commercial reactor fuel for Browns Ferry Unit 2 and Unit 3.

The third license amendment authorized the construction and operation of an Oxide Conversion Building (Figure 2) and an Effluent Processing Building. Together, the three new AREVA NP facilities, all colocated on NFS’s site, became known as the BLEU Complex. Later in 2003, the NRC’s environmental assessment of "no significant impact" for the BPF gave AREVA NP and NFS the final go-ahead to pursue the BLEU project. 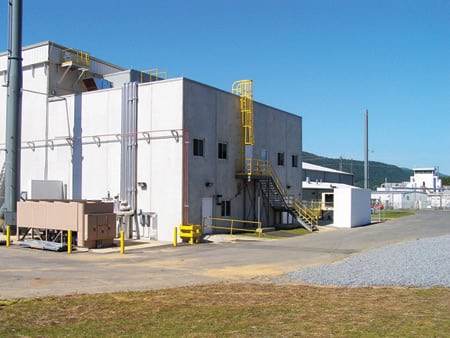 Downblending had already begun at Savannah River in 2003 as NFS awaited the last pieces of the licensing puzzle. That year, 7.1 MT of HEU averaging 64% U-235 were diluted with natural uranium to produce 105 MT of BLEU fuel with a U-235 content of 4.95%. Once the BLEU Complex was completed in 2004, downblending began there; to date, more than 64 MT of BLEU have been produced. AREVA NP continues to fabricate the fuel assemblies at its facility in Richland, Wash., using the process shown in Figure 3.

The first BLEU fuel assemblies were delivered to Browns Ferry in December 2004 and January 2005 for Unit 2’s Cycle 14 reload (Figure 4). The reactor’s start-up on April 14, 2005, marked the first use of BLEU fuel in any commercial nuclear power plant. The close correlation of predicted and actual startup criticality test results was a tribute to all personnel involved in the long process, from manufacturing to operations, engineering, and code development. The second use of BLEU fuel also took place at Browns Ferry, during a reload of Unit 3. The next BLEU fuel reload is scheduled for 2007. 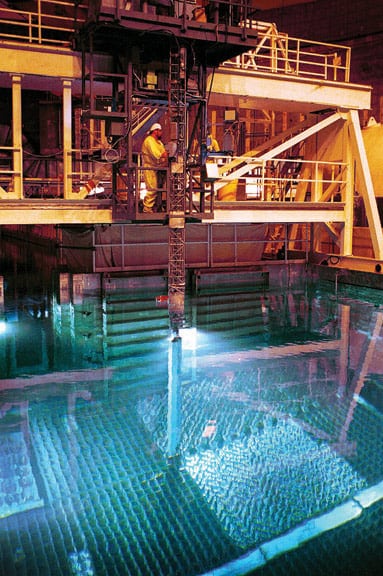 Converting the HEU into LEU fuel eliminates the costs of safeguarding the HEU from diversion. The process also provides an alternative to disposing of the highly radioactive material at great cost, estimated at more than $1 billion. Given the $500 million estimated cost of the BLEU project, conversion saves U.S. taxpayers more than $500 million.

According to TVA, the BLEU process reduces the utility’s nuclear fuel costs by 25%, compared with acquiring it commercially. Browns Ferry plans to use about 11 reloads of BLEU fuel over the next 10 years. The cost savings derived from the BLEU project augur a secure future for the Browns Ferry plant, especially in light of the NRC’s recent 20-year license renewal for all three of its units.

Best is yet to come

In 1953, President Dwight D. Eisenhower’s Atoms for Peace program challenged the world to diminish the potential destructive power of the world’s atomic stockpiles by harnessing their energy content and putting it to use for beneficial purposes. The BLEU project continues to exemplify the spirit of that program. In 2005 it was declared the Energy Engineering Project of the Year at the Platts Global Energy Awards ceremony in New York City.

The BLEU project continues to process surplus HEU, and it will have no problem with supply. The federal government recently declared that 200 MT of surplus HEU and 34 MT of plutonium were no longer needed for U.S. weapons programs. Following are the approximate quantities of HEU that would have had to be disposed of as waste, but which will instead be processed for reuse over the next two decades:

Estimates suggest that the 160 MT release to NNPP will postpone the Navy’s need to build a new HEU enrichment facility for at least 50 years.