For several years, the electric utility industry has been fixated on one important facet of the so-called shale gas revolution—the displacement of coal and new nuclear, and even some renewable energy capacity, by gas-fired plants. But what about the potential for gas to displace grid-derived electricity altogether? Maybe distributed generation should just as well be called disruptive generation.

Clearly, utility executives are beginning to articulate the threats more directly, and a few are capitalizing on the opportunities presented. Consider the following:

Ameren Corp., in a 2012 public strategy document, analyzed “Grid.com,” one of four broad future scenarios, that “contemplates the consequences of rapid innovation in energy efficiency and distributed generation technologies. Under this scenario, power demand growth rate falls below zero and customers become less reliant on their utility supplier for reliability.

The collective anxiety of the industry is embodied in a little-publicized report from the Edison Electric Institute (EEI), “Disruptive Challenges: Financial Implications and Strategic Responses to a Changing Retail Electric Business.” Essentially, it is the Ameren Grid.com scenario writ large. It cautions that the industry is likely to be transformed by disruptive challenges arising from the convergence of these factors: falling costs of distributed generation and other distributed energy resources (DER), especially solar photovoltaic (PV); an enhanced focus on development of new DER technologies; increasing customer, regulatory, and political interest in demand side management (DSM) technologies; government programs to incentivize selected technologies; the declining price of natural gas; slowing economic growth trends; and rising electricity prices in certain areas of the country.

The EEI report goes on to describe how DER customers are being subsidized by non-DER customers, and that utility revenues will eventually suffer because DER and energy efficiency/DSM reduce total demand. In a nutshell, cost of service has to be spread over a shrinking customer base. The ugly fact is that affluent customers are typically the beneficiaries of DER programs, and less-affluent ratepayers—who can’t afford to put solar panels on their houses—are subsidizing them. This has been shown in California, where the government’s clean energy policy framework is clearly driving the displacement of the traditional centralized electricity model with a distributed power model.

Interestingly, utilities appear to see the threat as largely from solar PV, because the declining cost of solar panels, together with generous subsidies, have made residential roof-top systems more affordable. The EEI report focuses on the 2,400 MW of distributed solar in the U.S., less than 1% of the retail electricity market.

Given the long-term price, supply, and demand scenarios for natural gas, however, the real threat may be the “gizmos” referred to by NRG Energy’s Crane, or the “rapid innovation” described in the Ameren strategy document. Many technocrats believe that the fuel cell is the ideal gizmo for converting natural gas to electricity in the home or business, but gas-fired microturbine/generators are also available. Germany has been funding a formal long-term demonstration project comprising several hundred residential fuel cells. According to several online accounts, Japan also has a “booming” combined heat and power (CHP) residential fuel cell market. Tokyo Gas plans to sell 12,000 such units made by Panasonic this year, up from its 2012 sales target of 7,100. Japan launched the Ene-Farm program in 2000 to develop and commercialize the market for micro CHP.

It may not qualify as technological breakthrough, but if the European and Japanese suppliers enter the U.S. market, it would certainly qualify as “disruptive”—though buying one of these gizmos would be disruptive to a homeowner’s wallet, too. The price tag for the ones in Europe and Japan are in the $20,000 to $30,000 range, though if you compare that to a rooftop solar PV system with enough storage capacity to make it equivalent to a gas-fed generator on the basis of run time, the price probably seems more reasonable. The cost could also be buried in the sales price of a new luxury home.

No meaningful sales volume is yet occurring in the U.S., but several suppliers of residential fuel cells and microturbines aim to change that. One supplier, Clear Edge Power, claims that its proton exchange membrane (PEM; figure 1) unit emits about 1 lb CO2/kWh, or 22 tons/year, whereas the equivalent energy from a modern gas-fired power station and gas home heating system would produce eight times the CO2. UK-based ACAL Energy reported in March that its fuel PEM technology, which eliminates much of the expensive and weighty platinum material, will reduce the cost by 25% compared to the best-in-class PEM product and put fuel cells on a par with an internal combustion engine (figure 2). 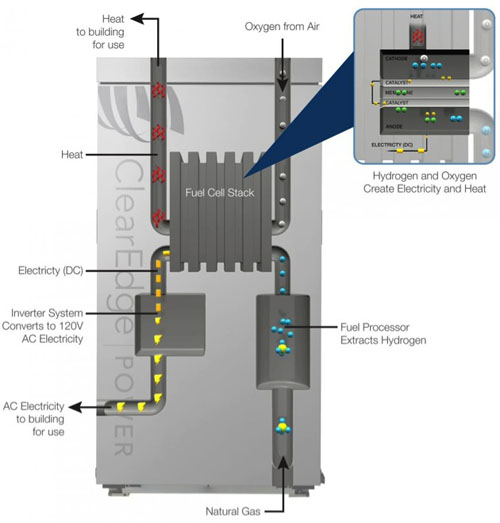 Cheap natural gas isn’t the only driver of a distributed energy, disruptive future for electric utility executives. Resiliency is the other. Although the jury is still out, many studies have shown that a distributed architecture is more secure than a centralized one. And the gas supply and delivery grid doesn’t seem to suffer the same down time as the electricity grid. More frequent catastrophic events, like Hurricane Sandy, are causing infrastructure planners to question their traditional strategies. The thinking seems to be that the probability of a protracted outage is lower for the gas grid than the electric grid. In addition, the natural gas system can store 15% to 20% of its overall capacity, in facilities spread all over the country. The nation’s electricity system by contrast has only 2.4% storage capacity, virtually all of it in a few pumped hydroelectric facilities.

It’s always good, of course, to keep a historical perspective in a sweeping “paradigm shift” debate. In the early 1970s, gas-fired CHP for the residential and small commercial market was called “total energy.” In the early to mid-1980s, it was called micro-cogeneration. Neither became viable markets. The period from 1986 (the repeal of the Fuel Use Act) to the late 1990s was characterized in the U.S. by the natural gas “bubble” and in the UK and Europe by the “dash for gas.” Favorable gas prices for many years did not result in a structural shift in residential and commercial electricity supply. The gas industry has a big enough challenge building the new transportation infrastructure to move natural gas to market from these burgeoning shale reserve regions.

Still, it’s always smart to anticipate and manage threats. Gas and electric interests have gone head to head for the consumers’ hearts and minds before. Utility executives assuredly see something out there on the horizon and don’t want to catch themselves, as Butch and Sundance did in their famous movie, asking, “Who are those guys?” Gas-fired distributed generation is disruptive generation to electric utilities; more utilities are likely to emulate NextEra and get out in front of the trend, rather than be washed up by it.