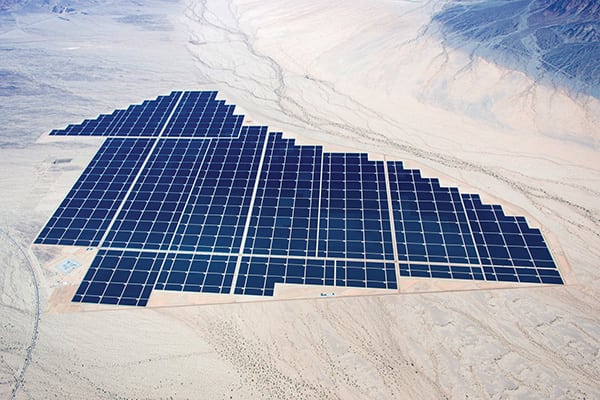 Briefly the world’s largest solar photovoltaic plant, Desert Sunlight remains an example of how California is charging ahead with its shift to renewable energy. Though the road has not been without bumps, First Solar has shown how these giant projects can be brought to operation safely and efficiently.

Just how fast are things moving in solar? When we received the nomination for the massive Desert Sunlight Solar Farm in late April, the 550-MW facility was the largest solar power plant in the world, sharing the title with MidAmerican Energy Holdings’ Topaz Solar Farm. Yet by the time this article went into production in mid-October, it had already lost that crown to California’s 579-MW Solar Star plant, which came online in June.

Statistics from the Solar Energy Industries Association (SEIA) demonstrate the staggering growth in solar photovoltaic (PV) generation in the U.S. over the past few years. In early 2013, the U.S. celebrated reaching 10 GW of installed PV capacity. California alone passed that figure in 2015. The large majority of that growth has been at utility scale, which has been dominated by ever-larger plants—the 550 MW of generation at Desert Sunlight is more than the total nationwide capacity installed as of mid-2008. The U.S. reached 20 GW of installed capacity this year, yet even that number is projected by the SEIA to be doubled yet again by the end of 2016 (some of the growth, admittedly, is driven by the pending expiration of the Investment Tax Credit).

Just how long Desert Sunlight holds second place remains to be seen. The SEIA solar project tracking database lists several larger projects in development, including some as large as 2.7 GW, though their chances of reaching commercial operation are unclear. But how Desert Sunlight got there is still significant.

Developing a mammoth solar PV plant, especially one located on public land, is a complicated, years-long process. For Desert Sunlight, that process began in 2007, when First Solar began planning for a large solar plant in Riverside County, California.

First Solar identified a site on Bureau of Land Management (BLM) land just north of Desert Center, about 60 miles east of the Palm Springs area and about 1.5 miles from the border of Joshua Tree National Park. Though largely vacant and undeveloped, there were environmental concerns, specifically the desert tortoise, which is indigenous to the area and is listed as threatened under the Endangered Species Act.

First Solar reached out to the California Department of Fish and Game (CDFG) and the U.S. Fish and Wildlife Service (FWS) to discuss wildlife survey protocols for the proposed project. Between 2007 and 2010, experts retained by First Solar performed biological surveys within the proposed project boundaries. The BLM’s draft environmental impact statement, released in 2010, determined construction of the project would result in a loss of habitat. First Solar, the BLM, FWS, and CDFG worked together to develop protective measures that would avoid, minimize, and offset impacts to the tortoises. 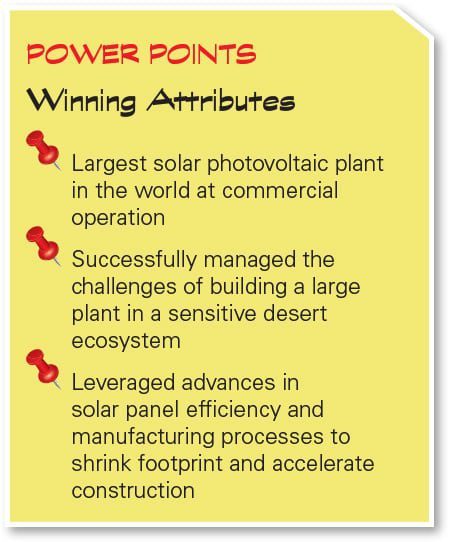 These measures included careful surveys and monitoring of construction areas to identify and remove tortoises; building a tortoise exclusion fence around the entire plant; taking steps during construction to avoid attracting tortoise predators such as ravens; long-term monitoring of relocated tortoises; and a habitat compensation plan to acquire and set aside alternate tortoise habitat that would make up for the areas lost to construction.

The FWS released its Biological Opinion on Desert Sunlight in July 2011, and the BLM issued a right-of-way to proceed with construction in August.

Power from Desert Sunlight was sold to Southern California Edison (250 MW for 20 years) and Pacific Gas & Electric (300 MW for 30 years) under two power purchase agreements. Several key events for the project took place in September 2011, beginning with the start of construction.

Desert Sunlight is only one of a number of large solar projects supported by the LPO—these include POWER Top Plants such as Agua Caliente and Solana Generating Station—but the size of this guarantee was exceeded only by the $1.6 billion for POWER’s 2014 Plant of the Year, Ivanpah Solar Electric Generating Station. Though somewhat controversial, the LPO has been successful in its statutory mission of supporting commercial deployment of large-scale advanced clean energy technologies that might otherwise not have secured financing.

Then, on September 30, First Solar sold Desert Sunlight to NextEra Energy subsidiary NextEra Energy Resources and GE Energy Financial Services. (Sumitomo Corp. of Americas would purchase a 25% share out of GE’s stake the following October, with NRG Yield buying the remaining 25% in June 2015.)

One thing that set Desert Sunlight apart from other large solar projects is that it employs First Solar’s Series 3 cadmium-telluride (CdTe) thin-film solar panels rather than the more common crystalline silicon panels (Figure 1). Though less efficient than crystalline silicon, CdTe panels are less expensive and have a less-carbon-intensive manufacturing process.

Though the power output alone makes the size of Desert Sunlight clear, a few more numbers add some detail. The project used more than 8 million PV modules, 1,100 miles of electrical wiring, and, according to First Solar, enough steel to build the Brooklyn Bridge four times over.

The size of the project meant some measures needed to be taken to speed construction. First Solar developed a pre-paneled cartridge design for the PV modules that allowed eight modules to be installed at once using a single paneled cartridge. Additionally, from the time the project began, First Solar improved the efficiency and output of its PV modules, which resulted in a decrease of 300 acres in the footprint for the project site. Desert Sunlight was originally designed with 77.5-watt modules with an efficiency of 10.7%, but by the project’s completion, module wattage had increased to 97.5 watts with an efficiency of 13.5%.

Construction was completed in 40 months, with on-site construction staff peaking at 1,100. The project was inaugurated in February 2015 at a ceremony keynoted by U.S. Secretary of the Interior Sally Jewell.

“Solar projects like Desert Sunlight are helping create American jobs, develop domestic renewable energy and cut carbon pollution,” Jewell said. “I applaud the project proponents for their vision and entrepreneurial spirit to build this solar project, and commend [California] Governor Brown for implementing policies that take action on climate change and help move our nation toward a renewable energy future.”

Southern California—especially its desert regions—has been rapidly sprouting giant solar projects for the past few years, but the trend has not been without controversy.

Environmental groups have expressed concern about the impact these large developments have on sensitive desert ecosystems, which, because of limited rainfall and slow-growing flora can take decades and even centuries to recover from damage. Along with Joshua Tree, the area hosts several world-famous national parks such as Death Valley. That’s sparked a battle between those who want to keep the desert pristine and untouched and those who argue clean energy is necessary to blunt the impacts of climate change, which is affecting the desert.

Some area residents have complained about the visual impact of large solar plants, which are expanding in an area already hosting a profusion of wind turbines. Still, with California moving this year to a 50% by 2030 renewable portfolio target, the demand for large solar seems unlikely to slacken. Desert Sunlight may no longer be the largest, but there’s no argument that it will remain a trendsetter. ■