Senate legislation to cap U.S. greenhouse gas (GHG) emissions beginning in 2012 would have generally modest cost impacts on the national economy, leading to reductions in gross domestic product (GDP) by 2030 that range from 0.2%, or $444 billion, to 0.6%, or $1.3 trillion, according to an Energy Information Administration (EIA) analysis.

But the analysis, which concluded that the costs of the legislation would depend largely on the availability of advanced nuclear and coal-fired generation technologies, drew criticism from Republicans for its projection of a massive buildup of nuclear generation.

First, a look at the EIA report.

According to preliminary estimates released May 20 by the Energy Information Administration, U.S. carbon dioxide (CO2) emissions from fossil fuels rose 1.6% in 2007, compared with the previous year, (Figure 1). The increase was fueled largely by weather conditions that increased demand for heating and cooling services and increased use of fossil fuels to generate electricity. 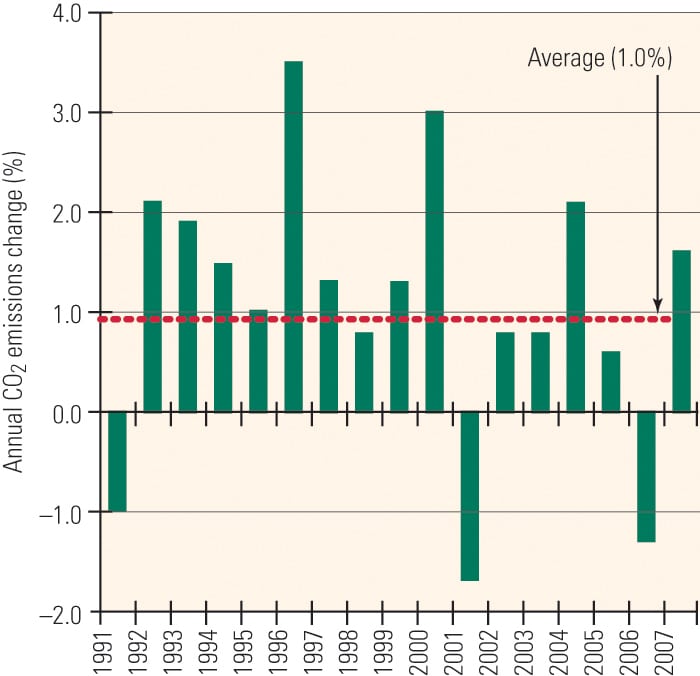 1. Energy-related carbon dioxide emissions grew by 1.6% in 2007 according to the Energy Information Administration’s latest figures. However, GDP grew by 2.2% and power sector electricity generation was up by 2.5%. Source: EIA, preliminary estimate for 2007

CO2 emissions from electricity generation in 2007 rose by 3% while generation increased by 2.5% compared to 2006. The EIA said this increase in power generation carbon intensity reflects, among other factors, a decline in non-fossil generation, as increased generation from wind and nuclear power failed to offset a drop in hydropower generation—likely resulting from decreased snow pack in the Pacific Northwest (Figure 2). 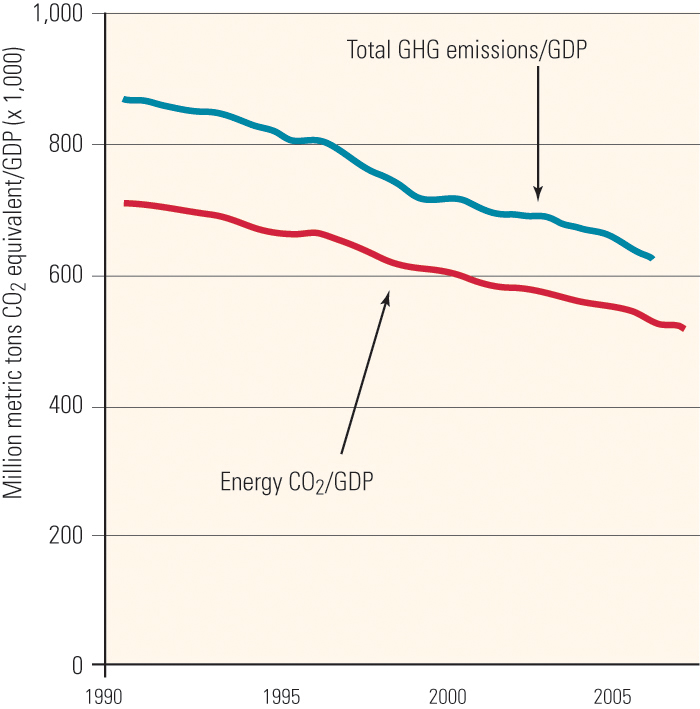 The EIA reported that U.S. energy-related CO2 emissions have grown by 19.4% since 1990 (see table). By comparison, the European Commission reported in December that the European Union had reduced its total greenhouse gas emissions by 2% below 1990 levels by the end of 2005, the latest year for which EU emissions data are available.

Even though the “Climate Security Act” (S. 2191), sponsored by Sens. Joseph Lieberman (I- Conn.) and John Warner (R-Va.), was shelved on June 6 because the Senate lacked the votes to prevent a filibuster, the sharp contrast between the EU and U.S. emissions performance provides potent ammunition for supporters of this and other climate change legislation.

The EIA analysis—which includes five sets of differing assumptions about the availability of low-carbon technologies, the availability of international emission offsets, and other key factors—concludes that the bill would increase electricity prices by 5% to 27% beyond its reference case in 2020 and by 11% to 64% in 2020, depending on the set of assumptions used.

Although the EIA concluded that S. 2191’s cap-and-trade system would have only modest impacts on the U.S. economy at large, it also concluded that the legislation would increase energy costs and reduce aggregate demand for goods and services, leading to a decline in manufacturing.

However, in the set of assumptions that resulted in the lowest overall impacts to GDP, the EIA assumed that nuclear generation would increase by 268 GW by 2030. That’s more than 2.5 times the current installed U.S. nuclear capacity and substantially higher than the EIA’s reference case assumption of 17 GW of new nuclear by 2030. This assumption set, which EIA refers to as the “core” case, also concludes that only 77 GW of new natural gas-fired capacity will be built by 2030—well below the reference case projection of 96 GW—and that utilities will add 64 GW of coal-fired generation equipped with carbon-capture and storage (CCS) technology.

The massive nuclear power expansion projected in the core case goes well beyond the wildest dreams of the nuclear industry—if not beyond the industry’s capability—and came in for sharp criticism by Senate Republicans opposed to the legislation.

A GOP staffer on the Senate Environment and Public Works Committee called the EIA’s projection of a massive nuclear buildup over the next two decades “incredulous,” noting that it took the industry 30 years to build the 100-plus nuclear plants in operation today.

“That would mean power companies with nuclear generation today would have to have two and a half times more nuclear capacity by 2030 than they have now,” the staffer said. “That would mean Exelon, for example, would have 42 nuclear power plants by 2030.”

Indeed, the EIA core-case results would appear to strongly buttress Republican assertions that S. 2191—or any future climate change legislation—needs to include a broad set of new incentives to accelerate deployment of advanced nuclear generation if the utility industry is going to be able to meet the legislation’s emission-reduction targets and timetables.

However, the high-cost case would result in only slightly greater macroeconomic impacts compared to the core case, lowering GDP by 0.3% ($729 billion) below the reference case, the EIA concluded.

In the analysis’s most pessimistic outcome, the EIA assumed that deployment of key technologies such as nuclear and coal with CCS would be limited to the agency’s reference case, and that U.S. emission sources subject to the cap would not have access to international emissions offsets. In this “limited/no international” case, GDP would slip by 0.6%, or $1.3 trillion, compared to the 2030 reference case. In this scenario, 357 GW of new renewable generation is added, gas-fired capacity additions are twice the amount projected in the reference case, nuclear additions are held to 17 GW, and very little new coal-fired generation is built.

How Big Will GHG Allowances Be?

In terms of prices for GHG emission allowances, the core case concludes that allowances would cost $30 by 2020 and $61 by 2030. Those estimates fall along the lower end of the range of allowance prices projected in an Environmental Protection Agency analysis of S. 2191 released two months earlier.

In summarizing the broad conclusions revealed by its analysis, the EIA said the “potential for and the timing of the development, commercialization and deployment of low-emissions electricity generating technologies such as nuclear power, coal with CCS, and dispatchable renewable power is a major determinant of the energy and economic impacts of S. 2191.”

The EIA did not factor into its analysis obstacles to deploying major electricity generation projects and/or the transmission facilities needed to support the big expansion of renewables. The authors cautioned that “the additional capacity needs in all of the S. 2191 cases suggest the need for review of siting processes so that they will be able to support a large-scale transformation of the nation’s electricity infrastructure by 2030.”

Though it’s not clear that the EIA report was a key factor in the failure of the Liebermann-Warner Climate Security Act, it’s clear that the issues it raises will haunt any future incarnations of carbon-related legislation.