History has shown that the proper deployment of automation on new construction projects can make the difference between a moderate performer and an industry-leading unit, between average financial results and accelerated profitability.

Given the magnitude of a new coal-fired plant construction project, automation is often viewed as just one of the many components essential to getting a unit constructed and into commercial operation. The path of least resistance for successful, quick time to market is often chosen without evaluating its long-term impact on operations. Planners often overlook how automation can be leveraged to reduce capital and operations and maintenance (O&M) costs.

As we progress toward the construction of new coal-fired power plants, developers, owners, and engineers are working with automation suppliers to better understand the impact that automation can have on short-term and long-term profitability. Economic benefits from automation often include optimizing human resources, reducing maintenance costs, expanding revenue streams, and improving a unit’s capability to perform more efficiently and reliably.

Emerson has been working with U.S. utilities and engineering firms on various projects to evaluate the financial benefits that can be derived from managed, effective automation deployment for new coal-fired generation. Studies collaboratively conducted by Emerson indicate that the deployment of a "digital power plant of the future" automation concept (Figure 1) can lead to capital, construction, and installation cost savings of $15 million to $20 million. In addition, O&M savings of $2 million to $4 million per year for the typical 600-MW to 800-MW coal-fired unit are possible. 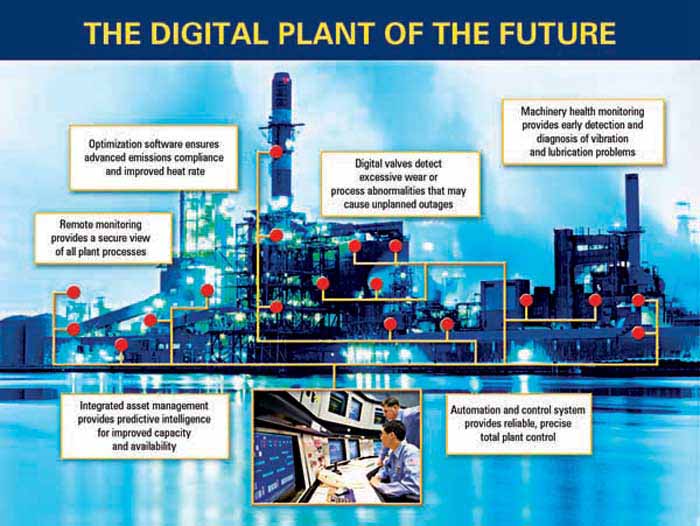 Understanding the Value of Automation

To understand the value that automation can deliver, first consider the unique characteristics of automation in comparison with other major equipment capital expenditures. The first consideration is its relationship to O&M costs. Although automation represents a small piece of total project capital costs (less than 5%), it can have a significant impact on O&M costs by:

Balancing this speed of technology evolution against new coal-fired units with an average planned start-up date of 2010 requires plant owners to make a number of decisions. What are the latest technologies? How can these technologies improve the use of people and the structuring of work processes? What are the emerging technologies, and how do you lay the best foundation to support these in the future while maintaining the highest return today?

To answer these questions requires an understanding of the operational foundation that will sustain a plant for the next 30 or more years of its life. At the same time, that foundation must be flexible enough to adapt to changing business realities.

Determining the best operational foundation for new a coal-fired unit first requires an assessment of where the future of power plant automation lies. Emerson conducted an appraisal based on a new generating station model. This model was used to determine the ultimate level of automation needed to achieve the greatest return on the capital (human and financial) invested. The model was developed by rethinking how automation is used in power plants. Instead of starting from today’s typical generating station and incrementally enhancing and/or expanding the status quo to include new concepts, Emerson started with a clean slate, bottom-up approach.

This approach involved outlining the functions, processes, and procedures carried out by power generators in the business of operating, maintaining, and commercializing their generating fleets. From this outline, a detailed review and analysis of every process function that is performed at the unit, plant, or fleet level for power generation was conducted. Each function was evaluated to determine:

2. Functionally based automation is the key to the digital power plant of the future. Source: Emerson Process Management

Reaping the operational and financial benefits of functionally based automation requires laying a suitable foundation for new construction projects. Up-front collaboration among the automation supplier, owners, developers, and their engineering contractors is essential. Key components for the automation foundation for any new generating unit are:

Automated intelligence. Great advancements have been made in recent years in the area of automated intelligence, and new coal-fired plant construction represents one of the more cost-effective opportunities for deploying it. Automated intelligence can be leveraged to streamline work processes and reduce resource requirements without encountering the typical management obstacles faced by existing plants.

One example of asset management intelligence is the identification of leaks in critical valves. If allowed to continue unchecked, the leaks can ultimately cause derates and/or forced outages.

Another example is asset management automation’s ability to identify plugged impulse lines on key sensors. It also has tools that can monitor the performance of plant process equipment to detect operational abnormalities before they cause costly equipment damage.

Predictive maintenance tools help to plan outage efforts so that work is only done when it is needed. Consequently, unnecessary and costly equipment and component overhauls are eliminated. Equipment condition monitoring allows power generators to schedule maintenance when the equipment needs it, thereby optimizing outage work and increasing time between outages.

It is critical that new coal project stakeholders ensure that personnel roles and responsibilities are developed. These include defining the work processes so that they take full advantages of the capabilities of asset management automation. Technology is only as good as its application. The alignment of plant staffing plans with intended automation use and management should be evaluated to ensure the best long-term O&M benefit.

Streamlined, integrated, plantwide architecture. In order to leverage the value of automated intelligence, we recommend that an architectural foundation be put in place to maximize current and future technologies.

The architectural foundation for automated intelligence starts with the extensive use of fieldbus-qualified field devices. These devices provide diagnostic information on the status of the equipment and its configurations to a centralized control system with integrated asset management tools.

As technology supports more secure, faster, wider broadband communications, fieldbus is beginning to be used by power generating plants to improve plant performance and increase productivity. It is used between the control system and intelligent field equipment to reduce the amount of physical equipment needed and potential points of failure. Similarly, it provides increased process and diagnostics information from the field and process equipment in real time.

There is no longer a divide between field instrumentation and the control system. They have become a merged entity that should be viewed as one cohesive unit. The ultimate architecture for intelligent fieldbus-based instrumentation and unit controls is one that utilizes the same control system platform for all plant monitoring and control. However, it would be limited in areas where safety is a concern or in niche applications where intelligent instrumentation is not yet available. Traditional power plant use of a mix of power line carrier (PLC) and distributed control system (DCS) platforms is no longer the solution.

It is well accepted that the more pieces of equipment there are in a plant, the more potential areas it has for loss of performance, loss of megawatt production, or both. Traditionally, power plants have used PLCs in a variety of sub-processes. Typically, the PLCs were included along with a skid or related packaged equipment during initial construction. These PLCs are generally hardwired, or serially interfaced, back to the unit’s DCS.

In the case of the digital power plant of the future, a plantwide fieldbus-based architecture is deployed. Intelligent field devices are deployed and interfaced by fieldbus directly to the unit’s DCS on a unitwide basis. This configuration eliminates unnecessary automation equipment — termination racks, PLC I/O, controllers, power supplies, and links to the DCS. The end result is a more manageable, single control system platform and a single, fully accessible user interface.

Deployed networking and communications schemes should support current and emerging technologies. The use of wireless technology to reduce costs should always be strongly considered. Using wireless-enabled, handheld units for inventory tracking, machinery health monitoring, and unique equipment identification via bar code and work order generation can result in significant benefits in productivity and responsiveness.

Wireless sensors provide low-cost installation in remote or difficult-to-access areas. To support global access and optimized use and distribution of resources throughout the power generation enterprise, the use of virtual user stations and network-based applications should also be considered.

A PEpC model was first introduced by the Construction Industry Institute (CII — www.construction-institute.org) in 1998 and was thoroughly tested by CII in conjunction with an array of process industry leaders. CII concluded that in both theoretical and field implementations, the use of PEpC could produce savings in excess of 10% to 15% of the time and at 4% to 8% less than the cost of the traditional engineer, procure, construct (EPC) process.

The PEpC model provides the processes and engagement needed to successfully realize the automation concepts of the digital plant of the future within a reduced time frame. When moving to new technologies such as fieldbus, architect engineering firms can face changeover or reengineering issues that are counter to project objectives. Engaging the automation supplier with the project stakeholders early in the design and engineering of the project will allow project implementation criteria to be jointly established at the start of the project. This will help ensure that the project is completed on time and on budget.

The benefits expected to accrue from realization of the digital power plant of the future include:

Expected cost savings for a new coal-fired unit in the 600-MW to 800-MW range are enumerated in Table 1. These are based on studies by Emerson and in collaboration with leading utilities and engineering firms. With the exception of construction costs, all cost savings are net present value over a 30-year project life at a 6% discount rate. The range of economic benefits depends on the time frame of implementation. 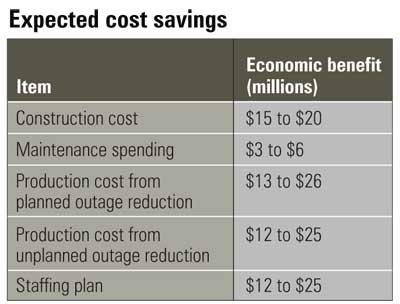 With the majority of the new coal-fired plants in the United States expected to become operational between 2008 and 2012, power generators must begin now to evaluate their options. These options should be based on a strategic vision for where automation technology will be going in the future. It is important to realize that the operational, regulatory, environmental, and economic issues facing the industry will continue to evolve. The ability to nimbly respond will be more important than ever. Laying the right foundation is crucial. The successful planner is one who considers this and then prepares accordingly.