If coal leaving a pulverizer isn’t dry, it may plug up the coal pipes leading to the boiler. The coal-drying process in a pulverizer is similar to that used by flash dryers. Certain coals should be preheated to make them more combustible. Generally, preheating is done on higher rank coals — those with a low moisture content and a high ratio of fixed carbon to volatile matter.

Seeking to automate the process, the management of Nanticoke Station decided to develop and test a new algorithm for on-line control of pulverizers. The objective of the test program was to optimize both the drying of the PRB coal and its automatic transfer from the pulverizers to the eight boilers.

Nanticoke Station has eight units, each with a nominal rating of 500 MW. Five ball-race mills of 10E10 size supply coal to the units’ opposed-fired boilers. The fuel that each unit fires is 80% PRB coal.

The Nanticoke plant was designed to burn bituminous coals using only dedicated primary air (PA) heaters. However, trial burns of "low" PRB blends (<30% PRB by mass) confirmed and quantified a shortfall in the heat available to the pulverizers. As a result, plant management decided to install natural gas – fired duct heaters to raise the PA temperature 50 degrees to 75C.

From an operational point of view, one of the most useful outputs of the algorithm is raw coal moisture. The use of process variables directly related to the pulverizers yields results that are virtually real time for coal at those points. Unfortunately, measurements made within the conveyor system — between the silos and the pulverizers — involve a significant time lag.

To isolate the impacts of various variables, eight tests were conducted on a single pulverizer, grinding PRB coal. During them, the pulverizer’s outlet temperature and the air/coal ratio were varied across the normal full range of operation. Test results (see table) indicate excellent agreement between algorithm-predicted raw coal moisture numbers and values determined by laboratory analysis of grab samples collected during the testing.

A survey of five power plants burning PRB coals indicates that they use a wide range of pulverizer outlet temperature setpoints, from 48.9C to 65.6C. Due to this variation, Nanticoke Station’s management decided to conduct tests to determine the drying performance of the plant’s pulverizers before raising the percentage of PRB coal burned.

The results of the tests, all at maximum continuous rating, indicated a dew point of about 49C with the pulverizer operating at or near full load. The original operational setpoint used at Nanticoke was 57C. Over the years, improvements in process control and measurement accuracy have enabled the setpoint to be lowered to 53C.

However, the total moisture content of PRB coal delivered to the station changes from shipment to shipment and is affected by seasonal variations and weather. Given this variability and the fixed limits on duct heater and PA system capacity, the only way to maintain a fixed setpoint was to reduce the load on the pulverizer load. Of course, a far more serious problem — plugging of coal piping — would arise if the fixed setpoint did not provide sufficient margin to handle a spike in surface moisture.

Nanticoke Station follows what is considered standard practice in the electric power industry when starting up a pulverizer operating on PRB coal: hot air is introduced to maintain the outlet temperature above the normal operating setpoint. The PA control system for the plant’s pulverizers uses three dampers (for total flow, hot air, and tempering air) to enable independent and stable control of total PA flow as temperature changes. The curves shown in Figure 4 are typical for a normal pulverizer start-up at Nanticoke. 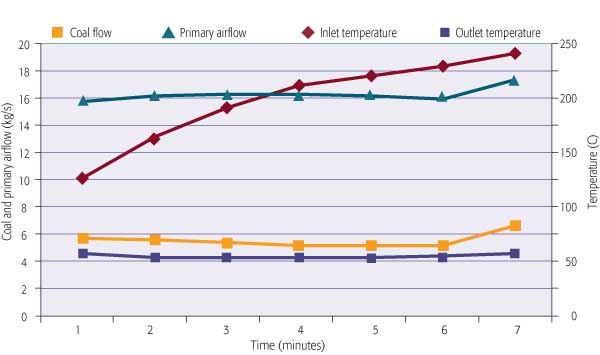 As mentioned earlier, Nanticoke Station installed natural gas – fired duct burners to raise the heat available to the pulverizers. Later, however, rises in the price of gas served to make unit start-ups more costly. For this reason, some plants now use coal as a start-up fuel. But doing so early necessitates a cold pulverizer start-up.

In principle, a lower pulverizer inlet temperature will evaporate less surface moisture. As a result, the absolute humidity at the pulverizer outlet will be much lower than in a traditional hot start. To prove the viability of cold pulverizer start-ups, plant engineers conducted a test on a single Nanticoke pulverizer firing PRB coal. The results are shown in Figure 5.

Engineers at Nanticoke Station also developed a generic control algorithm for optimizing the steady-state drying process of a moist solid by a hot gas. This algorithm was then made specific for coal and adjusted to account for the psychometric performance of the drying air and predicted values of total moisture in the coal entering and leaving the pulverizer. Measurements of the additional inputs required by the algorithm (the inlet coal temperature and the humidity of the air leaving the pulverizer) were made on one test pulverizer.

Tests then were performed to compare the algorithm’s predictions with actual performance measurements. Under steady-state conditions, the predictions of coal moisture entering the pulverizer were within 2% of values gleaned from grab sample analyses.

By demonstrating the ability to discriminate the fuel source entering the pulverizer, the tests confirmed that it would be possible to automatically transfer pulverizer settings with a change in fuel source. During the tests, the algorithm was modified to provide performance predictions during pulverizer start-up, when the coal inventory is being established and quiescent conditions do not exist. Yet the test results confirmed that a cold pulverizer start could be executed without saturating the air leaving the pulverizer.

With the help of displays of real-time operation on a psychometric chart, operators of Nanticoke Station now can monitor the pulverizers’ drying performance. Given proper control and procedures, the use of cold pulverizer starts has become a viable option.

Future plans include operating the pulverizers on an alternate fuel, confirming the minimum setpoint temperatures for low-load operation, and conducting a long-term trial of the humidity instrument’s survival in the pulverizer’s coal air environment.