In a carbon-constrained world, CO2 capture and storage (CCS), although considered the most radical of the carbon abatement technologies (CATs), seems to be favored over combustion and steam cycle improvements alone. However, CCS is the least commercially developed of the CAT options; at present, there are only field prototypes for its various forms.

Nonetheless, most of the means needed to implement CCS are currently available, and recent developments suggest the processes may eventually be feasible, even as a retrofit to existing plants burning pulverized coal (PC).

For any of the CCS designs, the goal will be to optimize the power generation process for CO2 capture. In the U.S., that effort is now a work in progress. Separating CO2 from the high-flow and high-volume flue gases with the low CO2 concentrations that PC-fired plants produce will be especially challenging. Accordingly, a key interim step (in advance of designing a CCS system) will be finding ways to make the flue gas treatment systems at old and new PC plants "CO2-capture-ready."

An analysis by the International Energy Agency (IEA) suggests that CCS alone, in one form or another, promises the greatest overall reduction in CO2 by year 2030: up to 8 metric gigatons per year, or almost 30% of projected energy-related emissions of the greenhouse gas (GHG) by that date. CCS could even provide as much as 55% of the CO2 decrease that Europe says it will need to achieve by 2100. The prospects for doing so are even brighter if CO2 market "prices" rise as high as $25 to $30/metric ton.

Peering into the future

In one of the sessions of ELECTRIC POWER 2007’s two "Environmental Regulatory Issues, Strategies, and Technologies" tracks, Grant Grothen, PE—GHG programs director for Burns & McDonnell’s energy division—presented a tutorial on the various remedial opportunities. He began by reminding the audience of an inconvenient truth: Combustion of 1 ton of PRB coal produces 1.8 tons of CO2.

As a result, if and when massive amounts of CO2 begin to be captured from PC, fluidized-bed, or integrated gasification combined-cycle (IGCC) plants, the industry will have no choice but to use both underground reservoirs and the oceans’ depths to sequester it. Grothen also emphasized that although emissions of other gases such as methane and hydrochlorofluorocarbons produce, on a per-ton basis, a far more powerful greenhouse effect than those of CO2, carbon dioxide represents 84% of the problem.

The scale of the problem is daunting. America’s CO2 emissions are more than twice those of Europe and constitute 25% of the world’s CO2 emissions from the burning of fossil fuels as a whole (Figure 1). China is creeping up and may surpass the U.S. as early as next year. U.S. power plants produce about 2.4 billion tons of the heat-trapping gas annually; the transportation sector is close behind at just under 2 billion tons; industry contributes 1 billion tons. A forest covering four million acres (larger than the state of Connecticut) would be required to sequester just the CO2 produced by a 750-MW supercritical coal-fired plant. Yet Grothen said he expects the generation industry to be dominated by coal plants equipped with CCS technologies, and by the next generation of nuclear plants, by 2040.

1. Earth in the balance. The "carbon cycle" describes the movement of carbon between the atmosphere and the land, oceans, and man-made (anthropogenic) sources such as automobiles, industry, and power plants. Source: Intergovernmental Panel on Climate Change, Climate Change 2001: The Scientific Basis

In another session, Joe Bugica of EPRI reviewed the diverse approaches that will have to be applied to power generation in a carbon-constrained world. He cited the need for specific technology advancements capable of significantly reducing CO2 emissions over the coming decades. Among them are:

Each of the CO2 collection technologies discussed in the two conference tracks and in the workshop papers on climate change can be categorized as either a post-, pre-, or oxy-combustion approach to the problem (Figures 2, 3, and 4). Presenters elaborated on their particular variation on these three central technology themes.

2. Postcombustion capture. Amines are the most popular chemical solvents proposed for removing CO2 from low-pressure flue gas. After absorbing the gas in the vessel at right, the CO2-rich solvent is sent through a stripping column (not shown), where it is heated with steam to reverse the reaction. The CO2 collected in the stripper is then compressed and liquified before being sent to its final destination. The solvent, now CO2-lean, is recycled to the absorption stage. Source: DOE/NETL Carbon Sequestration Technology Roadmap and Program Plan 2007

4. The oxy-combustion approach. In a typical cryogenic air separation unit, air is pressurized to 70 to 90 psi and purified to remove H2O, CO2, N2O, and trace hydrocarbons. The air is then cooled against returning products (O2 and N2) and separated into pure O2 and N2 fractions in a distillation column. Source: DOE/NETL Carbon Sequestration Technology Roadmap and Program Plan 2007

Amine absorption. Robert M. Davidson gave a workshop presentation, on behalf of the IEA Clean Coal Centre in the UK, that showcased Europe’s extensive CO2 removal know-how. He said this postcombustion approach (Figure 2), involving amines, would constitute more than 75% of the cost of CCS. The solvent-based technology may be incorporated into IGCC plants, if it proves neither too costly nor complex. Both issues are being targeted by Europe’s ongoing and bold technology R&D programs, which include:

Ammonia scrubbing. Powerspan Corp. is working with FirstEnergy Corp., at the utility’s R.E. Burger Plant in Ohio, to demonstrate the feasibility of adding wet ammonia scrubbing to the company’s ECO (electro-catalytic oxidation) process. If successful, the process could serve as a viable, low-cost option for retrofitting conventional coal-fired plants to make them CO2-capture-ready.

In another presentation at the Chicago conference, Frank Alix, Powerspan’s CEO, admitted that amine scrubbing technology is more mature. But, he added, the idea that owners of PC plants must be resigned to using high-cost amines is what is driving the focus on IGCC as the allegedly "best available control technology" for power production in a carbon-constrained world.

In his talk, Alix presented data that show they have another option. At its core is the chemical reduction of NOx (in the form of NO2) to N2 by dissolved ammonium sulfite in a wet ammonia scrubbing liquor, after the raw flue gas containing the NOx has been pre-oxidized and de-dusted. According to Alix, the process has proven capable of reducing NOx levels to less than 0.016 lb/mmBtu, or 10 ppm.

Powerspan’s technology would scrub CO2 with ammonia and recycle the regenerated ammonia to a multipollutant-removal scrubber. This proprietary technology, with a reported CO2 removal cost of $11/ton, looks to be more economically attractive for CO2 removal than other common alternatives: $47/ton for an MEA approach, $32/ton for an oxy-fuel system, and $18/ton for IGCC. Moreover, a joint analysis by the U.S. Department of Energy (DOE) and EPRI/Parsons Corp. projects that using ammonia scrubbing to capture CO2 would incrementally increase the busbar cost of a power plant’s output by just 10 mils/kWh, versus 40 mils/kWh for an approach using MEA absorption.

Significantly, the use of ammonia reagents to reduce the SO2 emissions of plants burning high-sulfur coal (as the ECO process does) will be fostered by the intrinsically high value of the by-product of the process—ammonium sulfate, a fertilizer. In the fertilizer business, ammonium sulfate is worth 50% more per unit of nitrogen than urea and 200% more than the anhydrous ammonia used to form it.

My own presentation at ELECTRIC POWER 2007 called Powerspan’s ECO process the notable culmination of more than 30 years of development (beginning in Japan) of the oxidation-reduction chemical process scrubbing mode. I noted the following steps as its key elements for scrubber conversion applications:

Simultaneous removal of SO2, NOx, and Hg reduces the most troublesome pollutant emissions enough to minimize the complications inherent in retrofitting plants for CO2 removal. The approach promises optimal CO2 capture readiness, because the CO2 removal process can use the same common alkali, ammonia, magnesia, or even sodium alkali that provides the necessary soluble sulfite in the pollutant scrubbing operation.

Putting the process to work

Dry circulating fluidized-bed (CFB) scrubbers may be the best vehicles for exploiting this oxidation-reduction process for simultaneous removal of multiple pollutants. Such scrubbers are among the most efficient mitigators of NOx, HgO, SO2, and SO3 emissions. In addition to their environmental pluses, CFB scrubbers have the following process and system advantages:

The best of the rest

In other sessions, presenters brought attendees up to speed on the use of advanced combustion technologies to mitigate CO2 emissions. For example, Keith Morris—chief engineer for the Americas region at Doosan Babcock—presented details of his company’s supercritical and ultrasupercritical boiler designs using oxy-fuels. He said he considers retrofits of existing plants a "major priority." In its vision of CO2 capture-ready plants, Doosan includes plants that have been upgraded to increase their thermal efficiency and to enable the cofiring of biomass.

Among Doosan’s clients are the 500-MW subcritical Units 1 and 2 of SSE’s Ferrybridge Power Station in Yorkshire, UK, which will be converted to run at supercritical pressures and temperatures while maintaining their net power output. Estimates place the total cost of converting each unit at $480 million, or about $1,000/kW. When the project is completed in 2011, cycle efficiency will have risen substantially, from 37.2% to 46.2%. Doosan is actively developing oxy-coal firing technologies as well. For example, the company plans to use an existing 90-MW multifuel burner test facility to demonstrate, assess, and commercially develop its oxy-fuel firing process.

Oxy-fuel combustion (Figure 4) was also the subject of a presentation by Minish Shah of Praxair Inc. In his view, making a plant CO2-capture-ready will require giving it the ability to fire air or oxygen. Based on Praxair’s R&D efforts to date, including operating pilot plants as large as 5 MWt, developers already have determined the optimum oxygen concentration for flame stability and a way to use flue gas recirculation to maintain heat fluxes. According to Shah, the developmental steps that still need to be made include:

No technical track on climate change would be complete without an update on the progress of the DOE’s $250 million FutureGen project (Figure 5). Jerry Oliver of the FutureGen Industrial Alliance provided it. This 275-MW research plant, still on track to be completed by 2012, will use IGCC to generate electricity and hydrogen with near-zero emissions. It also will capture and sequester, in underground geologic formations, the 1 million metric tons of CO2 it will produce each year. 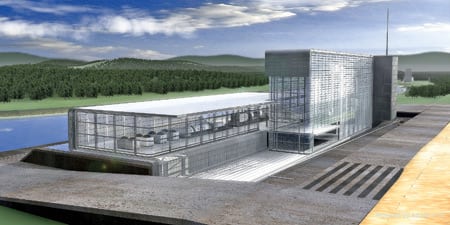 5. The industry’s Holy Grail. An artist’s rendering of the near-zero-emissions FutureGen plant, scheduled to come on-line in 2012. Courtesy: U.S. Department of Energy

According to Oliver, FutureGen has moved beyond the development and initial conceptual design phase into Phase 2, the detailed design phase. Phase 3, featuring even more detailed design, is scheduled to begin next year. In the final phase, a program of modeling and monitoring will verify the safety and permanence of CO2 sequestration.